By Luis Jaime Acosta and Julia Symmes Cobb BOGOTA (Reuters) - A group of former rebels from the Revolutionary Armed Forces of Colombia (FARC) said in a video posted overnight that they will embark on a new offensive, threatening to resume five decades of armed conflict against the government. Two former commanders from the group, known by their aliases Ivan Marquez and Jesus Santrich, appear in the 32-minute YouTube announcement, which Marquez said was filmed in Colombia's Amazon jungle. 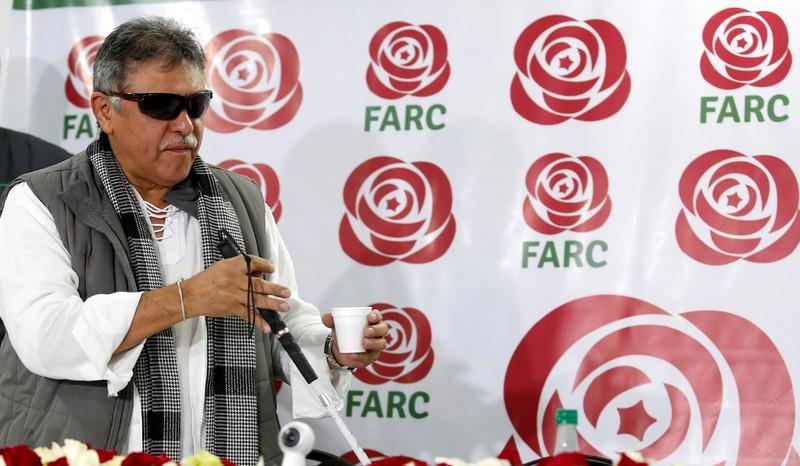 BOGOTA (Reuters) - A group of former rebels from the Revolutionary Armed Forces of Colombia (FARC) said in a video posted overnight that they will embark on a new offensive, threatening to resume five decades of armed conflict against the government.

Two former commanders from the group, known by their aliases Ivan Marquez and Jesus Santrich, appear in the 32-minute YouTube announcement, which Marquez said was filmed in Colombia's Amazon jungle.

A peace accord signed by FARC and the Colombian government three years ago has come under pressure on various fronts, including the murder https://www.reuters.com/article/us-colombia-peace-feature/murder-of-hundreds-of-colombian-activists-casts-shadow-over-peace-process-idUSKCN1VF0IK of hundreds of former rebels and human rights activists, delays in funding for economic efforts by former combatants, and deep political polarization.

"This is the continuation of the rebel fight in answer to the betrayal of the state of the Havana peace accords," said Marquez, dressed in olive fatigues and surrounded by armed fighters. "We were never beaten or defeated ideologically, so the struggle continues."

In his response, Colombian President Ivan Duque announced a reward of 3 billion pesos ($863,000) would be given for information leading to the capture of each of the people who appear in the video.

"I have ordered the creation of a special unit for the pursuit of these criminals, with reinforced capacities in intelligence, investigation and mobility in all of Colombian territory," Duque said in a taped statement.

Marquez, one of the negotiators of the 2016 agreement, went missing last year after his nephew was arrested and taken to the United States to cooperate with investigations into drug trafficking.

The dissidents' objective is the installation of a government that will support peace, Marquez said. It will fight corruption and fracking and demand payments from those participating in illegal economies and from multinational companies, he said.

Duque was elected on a platform to change parts of the deal, but has failed to get congressional or judicial support to do so. He has repeatedly said former guerrillas with a true desire to disarm will be supported.

The government will seek arrest warrants for the people in the video, high peace commissioner Miguel Ceballos said. The military capacity of the group is limited and its members are likely in neighboring Venezuela, Ceballos said.

Many active rebels are believed to base themselves in Venezuela. Last month, Venezuelan President Nicolas Maduro said both Marquez and Santrich were welcome. https://www.reuters.com/article/us-venezuela-politics/maduro-says-missing-farc-leaders-are-welcome-in-venezuela-idUSKCN1UO028

On Thursday, the vice president of Venezuela's socialist party, Diosdado Cabello, said Maduro's government had nothing to do with the "conflict in Colombia." In a speech in Caracas, he said: "We deeply regret what is happening in Colombia, which continues in a spiral of violence."

"THIS TRICKERY, THIS BETRAYAL"

Former FARC commander Rodrigo Londono, known as Timochenko, said on Twitter the "great majority" of ex-FARC fighters remain committed to peace "despite all the difficulties and dangers."

Londono is now a leader within the Revolutionary Alternative Common Force, the FARC political party born out of the peace accord. In a statement, the party reiterated its rejection of the dissidents.

The United Nations Verification Mission also rejected the new call to arms, as did the special tribunal created under the deal to prosecute war crimes.

The dissident group will seek to coordinate with fellow leftist rebels, the National Liberation Army (ELN), Marquez said, and will not use kidnapping and ransom as a source of financing.

"All of this, this trickery, this betrayal, this perfidy, the unilateral modification of the text of the accord, the unfulfilled commitments on the part of the state, the judicial set-ups and insecurity, have obliged us to return to the mountains," said Marquez, whose birth name is Luciano Marin.

Some 13,000 FARC members, including 7,000 combatants, demobilized under the accord, many joining reintegration efforts or returning home to their families.

"The start of a new guerrilla group by Ivan Marquez is a politically significant event, but at this point does not alter the country's security profile or security risks. Most likely members of the group aren't even in Colombia," said Sergio Guzman, founder of Colombia Risk Analysis.

Santrich, whose birth name is Seuxis Pausias Hernandez, is wanted by the United States on suspicion of conspiracy to export 10 tonnes of cocaine. It has sought his extradition. https://www.reuters.com/article/us-colombia-interpol/interpol-issues-red-notice-for-former-colombian-guerrilla-leader-idUSKCN1VC1TV

The commander Hernan Dario Velasquez, who goes by the alias "El Paisa," also appears in the video.

More than 260,000 people have been killed and millions displaced during Colombia's conflict between the government, rebel groups, crime gangs and right-wing paramilitaries.