By Helen Murphy BOGOTA (Reuters) - Colombia's ELN rebel group was responsible for the car bomb attack against a police academy that killed at least 21 and injured dozens, the government said on Friday, making it unlikely peace talks with the insurgent group can soon restart. In Thursday's attack, a car broke through checkpoints onto the grounds of the General Santander School in the capital Bogota before it detonated, shattering windows of apartments nearby. Defense Minister Guillermo Botero said the car was driven by ELN explosives expert Jose Aldemar Rojas 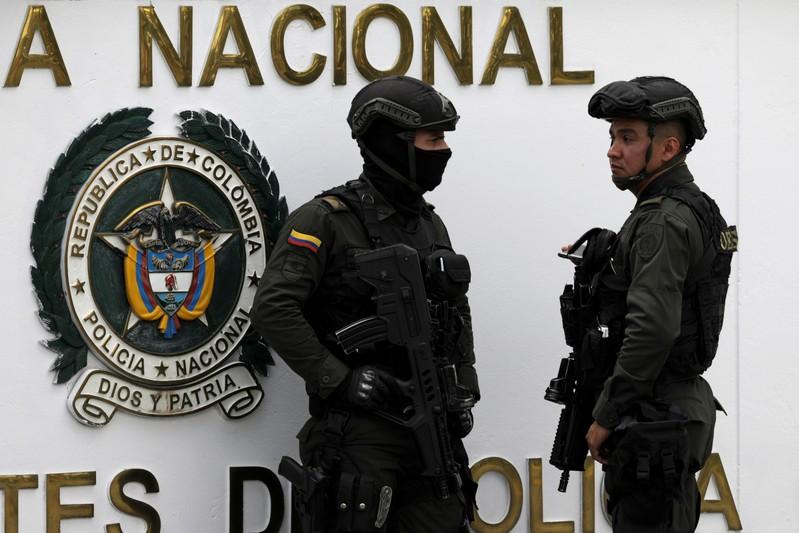 BOGOTA (Reuters) - Colombia's ELN rebel group was responsible for the car bomb attack against a police academy that killed at least 21 and injured dozens, the government said on Friday, making it unlikely peace talks with the insurgent group can soon restart.

In Thursday's attack, a car broke through checkpoints onto the grounds of the General Santander School in the capital Bogota before it detonated, shattering windows of apartments nearby. Defense Minister Guillermo Botero said the car was driven by ELN explosives expert Jose Aldemar Rojas.

"A terrorist act by the ELN took those lives," he told reporters in Bogota. At least 20 police cadets died in the blast, as did Rojas.

The National Liberation Army (ELN) has not claimed responsibility or issued a public statement.

Made up of some 2,000 fighters and considered a terrorist organization by the United States and European Union, the ELN began peace talks with the government of former President Juan Manuel Santos in early 2017, but they have been put on hold by President Ivan Duque until the ELN frees its 17 hostages and stops attacks.

The car bombing - the worst in Colombia in almost 16 years - has heightened fears that a new wave of attacks could be launched in the Andean nation as a reaction to the right-wing president's stance.

Duque, who took office in August, has pledged to toughen offensives against the group and drug-trafficking crime gangs that kill and kidnap civilians.

The government in November asked Cuba - where talks were taking place - to capture ELN rebel commander Nicolas Rodriguez and provide information about the presence of other ELN commanders in Cuban territory.

It also asked Havana to act on an Interpol Red Notice on Rodriguez. The Cuban government has not responded publicly to the request.

Duque called the explosion a "crazy terrorist act" against unarmed cadets. It is the worst car bomb attack since the Revolutionary Armed Forces of Colombia (FARC) detonated a vehicle in Bogota's upmarket El Nogal social club in 2003, killing 36 and injuring more than 200.

"We will not rest until we capture and bring to justice the terrorists involved," Duque said late Thursday. "I tell the criminals that social repudiation awaits them, the rejection of all Colombians and the international community."

He is expected to provide details on the future of peace talks later on Friday.

The vehicle, a gray Nissan Patrol SUV, was carrying an estimated 80 kilograms (176 lb) of the high explosive pentolite, which has been used in the past by Colombian guerrillas, Attorney General Nestor Humberto Martinez said on Friday.

Botero said the car was registered in Rojas' name and that he was identified by his finger prints. He said investigators believe Rojas did not intend to carry out a suicide attack, and that the bomb may have been activated by a cellular phone by someone else.

Rojas, known by his war alias El Mocho or Kiko, had lost a hand in bomb-making activity and travelled frequently across the border to Venezuela, Botero said.

The attack was planned over about 10 months, he said.

Car bombs were frequently used in Colombia during decades of civil war between the government and various leftist rebel groups, as well as in violence involving the Medellin cartel led by the late drug lord Pablo Escobar.

The worst of the war, which killed some 260,000 and left millions displaced, ended when the government reached a peace agreement with the FARC in 2016.

The last major attack was in January 2018 when the ELN, the biggest rebel group that remains active, detonated a bomb in the northern port city of Barranquilla, killing five police officers and injuring dozens.

The ELN, founded by radical Catholic priests, has fought more than a dozen governments since it formed in 1964.