By Jan Lopatka PRAGUE (Reuters) - Hot, dry summers are fanning an unprecedented outbreak of bark beetles that are destroying vast swathes of central Europe's spruce forests which define the region's landscape. Draught brought on by climate change has weakened trees' natural defences and helped spawn the insects, creating an infestation that has forced landowners to chop down broad patches of forest across the Czech Republic, northern Austria, Bavaria and Slovakia 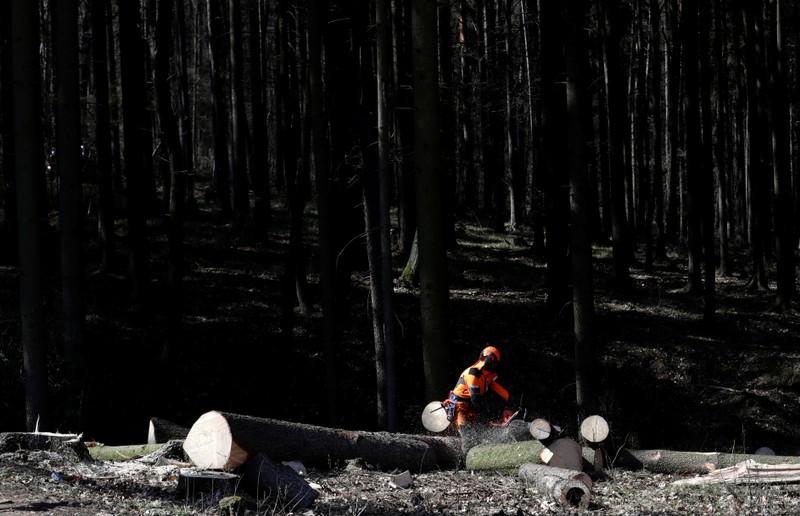 Draught brought on by climate change has weakened trees' natural defences and helped spawn the insects, creating an infestation that has forced landowners to chop down broad patches of forest across the Czech Republic, northern Austria, Bavaria and Slovakia.

While the bark beetle is natural to conifer forests and has a role in their ecosystem, climate change has helped it spread especially through single-variety spruce woods planted over the past two centuries.

The Czech Republic has been worst hit. Last year, the beetle infested 18 million cubic metres of spruce, more than 10 times amounts seen in most previous years, according to Agriculture Ministry estimates.

For an interactive version of the below graphic, click here https://tmsnrt.rs/2W3P3zq.

"Eighty percent of Czech spruce forests are at high risk of dying," said Jaromir Blaha, forest expert at Hnuti Duha, an environmental NGO. "Most of our spruce monocultures in lower and mid-laying areas will probably disappear, in years or in a few decades."

Central Europe's spruce forests are a key source of income for the timber industry. The forests also conserve water and help cool down the landscape, capture carbon, prevent flooding and are a popular destination for hikers and mountain bikers.

Over half of forests in the Czech Republic are made up of Norwegian spruce that is host to the European spruce bark beetle.

Bark beetles grow to about half a centimetre in length. They mate under the bark, and lay eggs. Larvae make feeding tunnels in the trees, mostly killing them.

Young adults fly out and, when weather allows, repeat the process once or twice per season.

Upper Austria's minister for agriculture, Max Hiegelsberger, in a report on forestry in 2018, said the situation was "dramatic" as more than half the felled timber in his region was damaged, and forest owners were seeing a huge drop in income.

"Last year, there were three generations (of bark beetle) instead of two across the Czech Republic. From one beetle in the spring, you get as many as thousands of beetles at the end of the season," said Jan Prihoda of Czech Forest.

Forest owners in the Czech Republic are overwhelmed and lack the workers and equipment to cut down affected trees and take away or debark all the timber, which is necessary to slow the infestation.

"I am really sad to say... we are not able to stop this outbreak and we will not be able to stop it in the future," Tomas Hlasny from the Czech Life Sciences University, told a conference in Prague this month, launching an international report on the bark beetle outbreak.

The report estimates that a massive increase in the supply of timber, as damaged trees have to be felled, helped drive down Czech timber prices to 15 euros per cubic metre of standing timber in 2018, from 55 euros in 2017, although others dispute those figures.

The Czech Agriculture Ministry has relaxed rules, so landowners no longer have to immediately log and replant affected areas in the worst-hit regions.

They only have to cut down trees under active attack in those areas and can leave other dead trees standing for the next three years.

Blaha, however, said this was not enough. Authorities should instruct owners to give up logging in the worst-hit areas altogether and focus on preventative measures such as cutting ageing, vulnerable trees in parts of the country that have so far not been attacked.

The ministry rejects that approach, saying that abandoning sanitary logging would mean "de-facto giving up".

Governments have provided aid for forest owners from tax relief to subsidies, and are preparing further measures.

Hlasny's team said forest management in the Czech Republic, Slovakia and Poland could still do more.

While the outbreak has hit Austria and Bavaria as well, experts say those regions have been keener to adapt to climate change.

This means planting fewer spruces, adding various types of broad-leaved species and planting them in stages to develop a multi-aged, diverse forest.

In the short run, the best hope is rain.

"There is a high risk that... the situation in Bavaria will no longer be manageable if the drought persists," said Peter Issig, spokesman for the Bavarian Ministry of Food, Agriculture and Forestry.