By Sangmi Cha, Hyun Young Yi and Josh Smith SEOUL (Reuters) - South Korea's battle to contain a new outbreak of the coronavirus has been complicated by a political and religious fight between President Moon Jae-in's administration and some of his fiercest critics. Sarang Jeil Church is the second religious group at the centre of a major coronavirus outbreak in South Korea. The government accuses the church of obstruction by not providing complete lists of its members and spreading fake news that is hindering anti-virus efforts, while church members say they are victims of a politically motivated witch hunt. 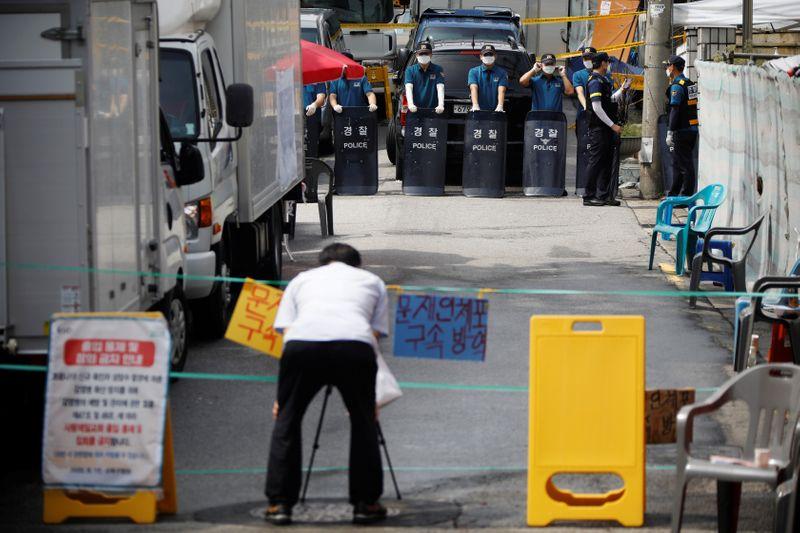 SEOUL (Reuters) - South Korea's battle to contain a new outbreak of the coronavirus has been complicated by a political and religious fight between President Moon Jae-in's administration and some of his fiercest critics.

Sarang Jeil Church is the second religious group at the centre of a major coronavirus outbreak in South Korea.

The government accuses the church of obstruction by not providing complete lists of its members and spreading fake news that is hindering anti-virus efforts, while church members say they are victims of a politically motivated witch hunt.

When the first infections were reported among church members on Aug. 12, the government says the group flouted social distancing instructions, with the church's leader and others attending a massive anti-Moon rally in Seoul on Aug. 15.

Speaking at the rally, Rev. Jun Kwang-hoon said Moon had "terrorised our church with the Wuhan virus".

Jun, an outspoken government critic, later tested positive for the virus. As of Thursday, at least 739 people affiliated with the church have tested positive, out of 3,415 tested, according to the Korea Centers for Disease Control and Prevention (KCDC).

The health ministry said on Sunday it had filed a complaint against Jun for violating self-isolation rules by participating in the rally, and for obstructing a medical investigation into the outbreak.

Peter Ko, an attorney for Jun, said the church followed social distancing guidelines and Jun was only at the rally for about 15 minutes.

Some Sarang Jeil members say the government is fabricating the test results as part of a plot to persecute them.

Ko said when a person identifies themselves as a church member to clinic staff, their results are more likely to come back positive.

"When we go get tested elsewhere and do not mention that we are a member of the congregation, we'd test negative," he said. "I would say there is a fabrication."

One of the church's pastors, Lee Hae-suk, said she was initially told her test was negative, but the next day she received a message saying she had tested positive.

"I can think of no other reason than that this is a plot to kill Sarang Jeil Church by increasing the number of confirmed cases," she said. When asked who she thinks is behind the plot, she said: "Moon Jae-in."

Another theory advanced by some members is that the outbreak is a "terror attack", possibly spread by tainted bottles of hand sanitizer.

Yang Dong-sook, another pastor, said at one point the church received bottles of what looked like hand sanitizer that smelled more like chemicals.

"We ignored it then, but now that I see so many infections, I think it could be true," she said.

Moon on Friday called for legal penalties for anyone obstructing anti-virus measures, including those conducting "all-out misinformation campaigns".

"Do not put credibility in the false news and rumours that are spreading at a fast rate," he told a briefing on Friday.

Kwon Yon-gyong, dean of the Graduate School of Christian Studies at Seoul's Soongsil University, said Sarang Jeil Church was closer to a political organisation than a religious community.

Another controversial religious group, the Shincheonji Church of Jesus, was involved with South Korea's first major outbreak, accounting for almost a third of the country’s total 16,670 cases.

Its leader was arrested after being accused of hindering the virus response by hiding information about the church's members and gatherings, which he denies.