The first death outside China from the new coronavirus was recorded Sunday in the Philippines, as countries around the world evacuated hundreds of their citizens from the infection zone and Chinese authorities completed a new, rapidly constructed 1,000-bed hospital for victims of the outbreak.

Chinese authorities also delayed the reopening of schools in the hardest-hit province and tightened the quarantine in one city by allowing only one family member to venture out to buy supplies.

The Philippine Health Department said a 44-year-old Chinese man from Wuhan, the city at the centre of the crisis, was hospitalized 25 January with a fever, cough and sore throat and died after developing severe pneumonia. The man’s 38-year-old female companion, also from Wuhan, tested positive for the virus as well and remained hospitalized in isolation in Manila. Philippine President Rodrigo Duterte approved a ban on the entry of all non-citizens from China. The U.S., Japan, Singapore and Australia have imposed similar restrictions despite criticism from China and an assessment from the World Health Organization that such measures were unnecessarily hurting trade and travel.

The death toll in China climbed by 45 to 304, and the number of cases worldwide surged past 14,550, according to China’s National Health Commission and other nations. The vast majority of those infected are in China; about 150 cases have been reported in two dozen other countries.

The U.S. on Sunday reported its ninth case, this one involving a woman in the San Francisco Bay Area’s Santa Clara County who arrived in the U.S. to visit family after recently traveling to Wuhan.

A hospital specially built to handle coronavirus patients in Wuhan is expected to open on Monday, just 10 days after construction began. A second hospital is set to open soon after.

Also, six officials in the city of Huanggang, next to Wuhan in Hubei province, were fired over “poor performance” in handling the outbreak, the official Xinhua News Agency reported. It cited the mayor as saying the city’s “capabilities to treat the patients remained inadequate and there is a severe shortage in medical supplies such as protective suits and medical masks.”

The trading and manufacturing center of Wenzhou, with nearly 10 million people in coastal Zhejiang province, confined people to their homes, allowing only one family member to venture out every other day to buy necessary supplies. Huanggang, home to 7 million people, imposed similar measures on Saturday.

With no end in sight to the outbreak, authorities in Hubei and elsewhere have extended the Lunar New Year holiday break, due to end this week, well into February to try to keep people at home and reduce the spread of the virus. All Hubei schools are postponing the start of the new semester until further notice.

Wenzhou, situated about 500 miles from Wuhan, put off the reopening of government offices until Feb. 9, businesses until Feb. 17 and schools until March 1. The city has reported 241 confirmed cases of the virus, one of the highest levels outside Hubei.

Similar measures have been announced in the provinces and cities of Heilongjiang, Shandong, Guizhou, Hebei and Hunan, while the major cities of Shanghai and Beijing have also closed schools and public offices indefinitely. 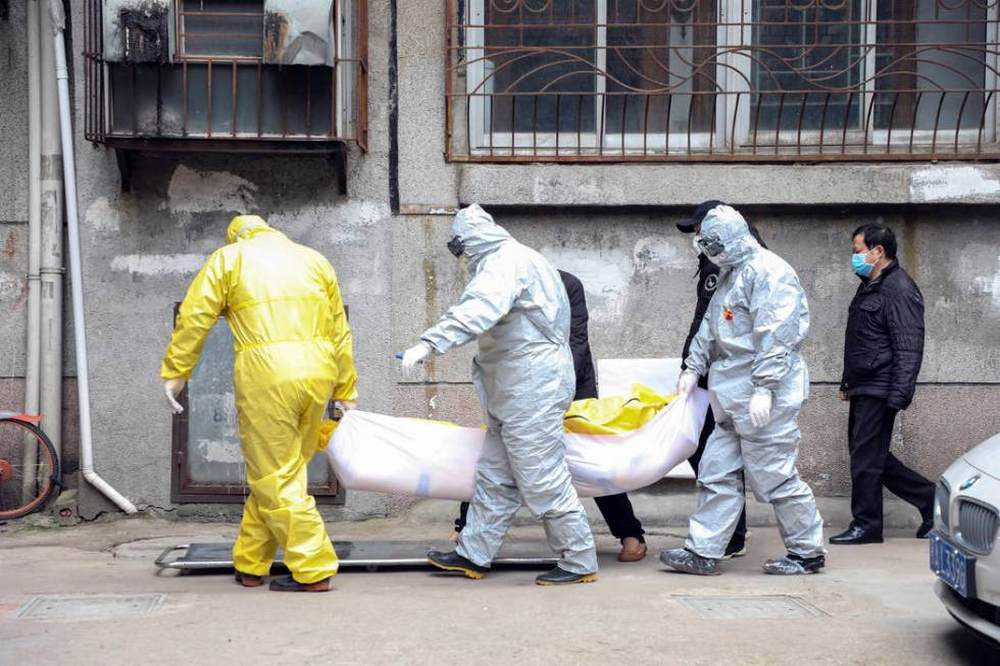 Funeral home workers remove the body of a person suspect to have died from a virus outbreak from a residential building in Wuhan in central China's Hubei Province. Image credit: AP

Despite its own drastic travel restrictions, China has chafed at those imposed by foreign governments, criticizing Washington’s order barring entry to most non-citizens who visited China in the past two weeks. Apart from damaging China’s international reputation, such steps could worsen a domestic economy already growing at its lowest rate in decades.

The crisis is the latest to confront Chinese leader Xi Jinping, who has been beset by months of anti-government protests in Hong Kong, the reelection of Taiwan’s pro-independence president and criticism over human rights violations in the traditionally Muslim territory of Xinjiang.

New Zealand announced Sunday it is temporarily barring travellers from China to protect the South Pacific region from the virus. The 14-day ban applies to foreigners leaving China but not to New Zealand residents. New Zealand also raised its travel advice for China to “Do not travel,” the highest level.

Saudi Arabia’s state-run media reported that 10 Saudi students were evacuated from Wuhan on a special flight. It said the students would be screened on arrival and quarantined for 14 days.

Over the weekend, South Korea and India flew hundreds of their citizens out of Wuhan. A Turkish military transport plane carrying 42 people arrived in Ankara on Saturday night. A French-chartered plane made its way toward France on Sunday with 300 evacuees from a multitude of European and African countries. And Morocco flew home 167 of its people, mostly students.

Indonesia flew back 241 citizens from Wuhan on Sunday and quarantined them on the remote Natuna Islands for two weeks. Several hundred residents protested the move.

Europe so far has 25 people infected with the virus. The German Red Cross reported two more cases there on Sunday, both German citizens who were airlifted from Wuhan on Saturday on a military transport carrying 128 people. Eight earlier cases in Germany were all linked to an auto parts factory.

France has six cases; Russia, Italy and Britain have two each, and Finland, Sweden and Spain each have one.

German Health Minister Spahn said he had spoken to his U.S. counterpart and agreed that the Group of Seven health ministers should hold a teleconference on how to coordinate efforts against the coronavirus.

“It doesn’t help if one country alone takes measures, and certainly not in Europe,” Spahn said. The other G-7 members are France, Italy, Japan, Canada and Britain.

The Trump administration’s national security adviser, Robert O’Brien, said on CBS’ “Face the Nation” that the Chinese so far “have been more transparent certainly than in past crises and we appreciate that and we continue to offer assistance to the Chinese.”

“Right now, there’s no reason for Americans to panic,” he added. “This is something that is a low risk we think in the U.S.’’

Vietnam counted its seventh case, a Vietnamese-American man who had a two-hour layover in Wuhan on his way from the U.S. to Ho Chi Minh City. The country ordered schools to close for at least a week in 19 of its 54 provinces and cities, including Hanoi and Ho Chi Minh City, which together account for over 4 million students.

Rubber glove manufacturers in Malaysia, the top producer of such gear, pledged to donate 18 million gloves to Wuhan. “While Malaysians are concerned about the spread of the virus to our shores, we are equally sympathetic toward China,” Primary Industries Minister Teresa Kok said.

The number of confirmed cases will keep growing because thousands of specimens from suspected cases have yet to be tested, said the WHO representative in Beijing, Gauden Galea.