Many regions in China are resorting to strict measures to contain the COVID-19 spread. AP

Despite stringent measures and a no-tolerance approach, China is again witnessing a flare-up in daily COVID-19 cases.

The country has logged a record new coronavirus cases — 31,454, out of which 27,517 are asymptomatic, Reuters cited the National Health Bureau data on Thursday (24 November).

These latest figures have surpassed the previous surge in mid-April when cases had reached 29,390 in the country, with the financial hub of Shanghai being locked down for two months.

Moreover, the new infections are the highest daily figure since COVID-19 was detected in Wuhan in late 2019, reports Associated Press (AP).

China also saw its first coronavirus deaths in six months as the capital, Beijing, reported three fatalities since Saturday, taking the country’s official death toll to 5,229, as per BBC. Among the three casualties, one was an 87-year-old man.

What measures is China taking to stem the COVID-19 transmission? Why are cases rising again even with China’s zero-COVID policy? Let’s take a closer look.

As per Nomura estimates, nearly 412 million people were affected by lockdown measures in mainland China as of Monday, reports CNBC.

Beijing has imposed a lockdown in the Haidian and Chaoyang districts, and shut shops, schools and restaurants there, noted BBC.

Those travelling to the capital will have to undergo COVID-19 testing for the first three days of their visit, and remain inside till their reports come back negative, BBC said.

Liu Xiaofeng, the deputy director of Beijing’s municipal Centre for Disease Control and Prevention, said it is the “most complex and severe” situation seen so far in the capital city, Reuters reported.

Zhengzhou, home to Apple Inc’s largest iPhone manufacturing site, has also adopted stern curbs to slow down the soaring coronavirus cases. Mobility control or lockdown will come into effect in eight districts of Zhengzhou which house a total of 6.6 million residents.

People have been asked to stay at home for five days, beginning Thursday (24 November), and travel outside only to get food or medical treatment. Daily PCR tests will also be conducted in what the city government has dubbed the “war of annihilation” against COVID-19, reports AP. China has reported a record rise in COVID-19 cases. AP

This comes after Zhengzhou recently saw violent protests at Foxconn, the biggest iPhone factory. Workers at the Foxconn Technology Group factory were reportedly beaten by the police while they were protesting over unpaid wages.

The stern restrictions in Guangzhou, which has reported nearly a third of the latest COVID-19 cases, have increased the plight of hundreds of migrant workers. According to the South China Morning Post report, these workers, who are mostly from the central province of Hubei, have been let out from Covid-19 quarantine centres, but they are not allowed to return to their homes in Guangzhou’s Haizhu district.

The report further states that Guangzhou, the southern megacity, recorded as many as 7,970 new cases on Tuesday, and the situation does not seem to get better.

ALSO READ: What is ‘Disease X’ that WHO believes can cause future pandemics?

Why do COVID-19 cases continue to rise in China?

So despite China’s strict measures, which include mass testing, strict quarantines, snap lockdowns and travel restrictions, the country continues to suffer from new COVID-19 waves.

The World Health Organization (WHO) has said it is “very hard” to contain the current Omicron variant which is mushrooming in China because it is more infectious than previous COVID-19 variants, reported BBC.

“The virus is evolving, changing its behaviour,” WHO’s Dr Tedros Adhanom Ghebreyesus said, adding “with that… changing your measures will be very important.”

In October, highly infectious Omicron sub-variants BF.7 and BA.5.1.7 were detected in China.

Global Times quoting officials had said that the cases have risen since 4 October due to the highly transmissible BF.7 variant, Hindustan Times reported.

Moreover, the WHO had earlier cautioned against the highly infectious BF.7 COVID-19 subvariant, saying it could become a new dominant variant, reports Hindustan Times.

Meanwhile, International Monitory Fund (IMF) has advised China to ramp up vaccinations amid the COVID-19 surge. 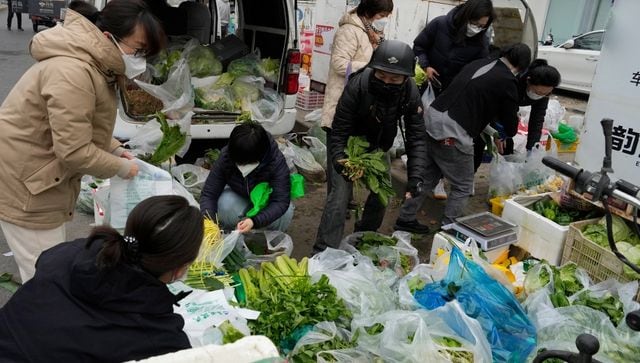 Omicron, which is spreading in China, is hard to contain. AP

China has also been urging its elderly to get vaccinated. Less than 60 per cent of the 60-69 age group has been fully vaccinated in the country, as per BBC.

Health authorities say only 85 per cent of adults over 60 had received both shots of domestic vaccines by mid-August in China, reported AFP.

China is also yet to approve more effective mRNA vaccines for the public and continues to depend on homegrown inoculations.

Further, Chinese officials believe that vaccination alone cannot stem the growing cases and have stressed on stringent curbs to wipe out the virus, reported Bloomberg.

Jin Dongyan, a virologist at the University of Hong Kong, has called for an increase in vaccinations, especially booster doses for the elderly and vulnerable population.

“If several million elderly people above 80 years of age have not been vaccinated, it will pose a potential risk,” he was quoted as saying by South China Morning Post.

Jin has also asked authorities to spread information about the current state of the pandemic to quell the panic.

“The most important point is public education. You should give the correct information to the public. Many people’s understanding of COVID still remains at the level of the initial [2020] outbreak in Wuhan. Therefore, this is what needs to be explained better.”

Have protests pushed China to step away from its zero-COVID policy?

After following the strictest zero-COVID policy since the outbreak of the virus, China has signalled a shift, with some cities such as Guangzhou, Beijing and Chongqing lifting curbs. This comes after the country witnessed the most widespread and unprecedented demonstrations over the last few days