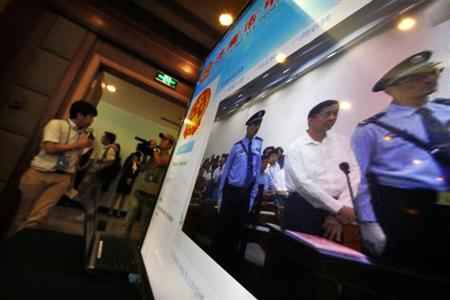 JINAN, China (Reuters) - Ousted senior Chinese politician Bo Xilai admitted to shaming his country and poorly handling a defection attempt by his former police chief after he told Bo his wife had committed murder, but Bo denied trying to protect her from the accusation.

Bo was a rising star in China's leadership circles when his career was stopped short last year by the scandal involving his wife, Gu Kailai. Bo is now on trial charged with corruption, taking bribes and abuse of power.

Supporters of Bo's Maoist-themed social programmes say he lost out in a power struggle with capitalist-leaning reformists in Beijing, exposing divisions within the ruling Communist Party as well as society.

With the evidence relating to the first two charges against Bo now apparently out of the way, the most sensitive charge was heard on Saturday, the third day of a trial many expected would last just a day.

A guilty verdict for Bo is a foregone conclusion, and despite his spirited defence, published on the court's official microblog, state media, which speaks for the party, has already all but condemned him.

As police chief of Chongqing, where Bo was Communist Party chief until he was dramatically sacked early last year, Wang Lijun was known as the strong arm of the law, energetically carrying out Bo's crackdown on crime and gangs.

But he fled to the U.S. consulate in the nearby city of Chengdu in February last year after confronting Bo with evidence that his wife Gu, a glamorous lawyer, was involved in the murder of British businessman Neil Heywood.

After first helping Gu evade suspicion of poisoning Heywood, Wang hushed up evidence of the murder, according to the official account of Wang's trial. Both Wang and Gu have been jailed for the murder.

When Wang told Bo of his suspicions about Gu, he was "angrily rebuked and had his ears boxed", according to the official account of the incident related by state media.

Bo told the court that he felt "ashamed" by Wang's flight to the U.S. mission which had reflected badly on the image of the party and country.

"I wasn't able to behave cooly at a critical juncture and I made serious errors in judgement," Bo said, according to a transcript provided by the court. "So I bear some responsibility for Wang Lijun's flight and I feel very sorry for this."

"I have made mistakes and errors, I feel very sorry and I'm willing to take appropriate responsibility, but whether there was a crime or not is another matter," Bo said.

"I did not act illegally to show favouritism and protect Gu Kailai."

Bo said he did not believe it when Wang first told him Gu was a suspect in Heywood's murder, saying Gu had shown Bo a Chongqing police report that said Heywood died of a heart attack bought on by drinking, which Heywood's wife had signed.

"In my mind, Gu Kailai is a weak and frail woman, she could not kill someone. And she had a good relationship with Wang Lijun," Bo said.

Bo was furious with Wang when he was told that his wife was a murder suspect, and sacked him despite not having party authority to do so, sources with knowledge of the case have said. Neither did Bo report the matter to his bosses in Beijing, all of which led to the abuse of power charge, they said.

Bo ordered his mayor, Huang Qifan, and security personnel to besiege the U.S. mission in Chengdu and take Wang into custody, even though he had no authority to mobilise security forces to grab someone in another city, the sources also said.

Wang was eventually coaxed out by officials from Beijing and taken to the capital. The Chongqing government initially explained he was worn out and emotionally spent and had taken a "vacation-style treatment".

Bo denied sacking Wang because of the murder allegations against Gu, saying he had reassigned Wang for genuine health reasons as Wang had complained of the pressure of his job.

Wang himself appeared in court to testify against Bo, saying he believed Bo sacked him to cover up the murder, adding that Bo had punched him during a confrontation over Gu's role in the crime.

"It was very dangerous at that time," Wang said, when asked why he had fled to the U.S. consulate. "I was the victim of violence, and my colleagues and those handling the case had disappeared."

The court said the trial would continue on Sunday.

Earlier in the day, Bo accepted responsibility for 5 million yuan in government funds he is accused of embezzling which ended up in his wife's bank account, saying he had let his attention wander, in testimony read out in court.

Bo said that Wang Zhenggang, former director of the urban and rural planning bureau in Dalian, where Bo once served as mayor, told him in 2002 that he suggested to Bo the money be used by Bo's wife and son, who was studying overseas.

"I refused him. Afterwards, Wang Zhenggang came and found me again, told me why the money was difficult to deal with, and said that if I were busy he could talk to Gu Kailai about it," Bo said, according to his testimony.

Bo said he agreed to Wang speaking to Gu about the money because he "lacked alertness", which is how the money ended up going to her. "After Gu and Wang had their discussions, I did not go and investigate, I let it slide," Bo said.

"This money had already gone into my wife's account, leading to the personal use of public money," he said.

"I am willing to approve the analysis of the prosecutors after their investigation, and at the same time accept legal responsibility for this. I am deeply ashamed and regretful about this incident," Bo said.

During court proceedings, Bo disputed Wang's account of what had happened to the money as containing inconsistencies, but Bo did not dispute his earlier written deposition, according to court transcripts.

"From start to finish in this written deposition I hold that I had did not intend to embezzle this money," he said.

On the first day of the trial, Bo mounted a feisty defence of charges he received more than 20 million yuan in bribes.

Bo said that he had initially admitted to anti-corruption investigators receiving the bribes as he had been "under psychological pressure".

Bo also said he been framed by one of the men accused of bribing him, businessman Tang Xiaolin, who he called a "mad dog".

(Additional reporting by Judy Hua in JINAN and Kevin Yao in BEIJING; Writing by Ben Blanchard; Editing by Robert Birsel)