Is China secretly developing a virus ‘deadlier’ than COVID-19 in a Pakistan laboratory?

There could be a virus more fatal that COVID-19. China’s infamous Wuhan Institute of Virology is reportedly developing pathogens which can cause more contamination than coronavirus in a lab run by the Pakistan army in Rawalpindi

A laboratory technician wearing personal protective equipment (PPE) works on samples to be tested for the Covid-19 coronavirus at the Fire Eye laboratory, a Covid-19 testing facility, in Wuhan in China's central Hubei province early on August 5, 2021. (Photo by AFP) / China OUT

The world is still reeling from one of the biggest crises of the century triggered by the coronavirus, which originated in China’s Wuhan. The pandemic is not over yet as new variants rear their ugly head now and then. Now reports are doing the rounds that China is up to no good once again. And aiding it is our trouble-making neighbour Pakistan.

Pakistan and China have been researching bioweapons at a “secret facility” near Rawalpindi, according to a report by the news agency ANI. The two nations are reportedly developing pathogens that are deadlier than the COVID-19 virus.

Also read: COVID-19 origin theories: Was there a lab leak in Wuhan or the US?

Yet again there is a connection to the infamous Wuhan. China’s Wuhan Institute of Virology and the Pakistan Army-run Defence Science and Technology Organisation (DSTO) have installed a highly advanced scientific infrastructure to research the deadly pathogens in Pakistan, sources told ANI. According to reports in the media, China is now developing pathogens similar to the novel coronavirus in Pakistan which have the potential to cause virus contamination on a scale far larger than COVID.

That is enough to send a chill down our spine. So far, there have been 629 million cases of COVID-19, including 6.6 million deaths across the world, according to the World Health Organisation (WH0). However many reports suggest that the figure is significantly underestimated with more than 100 countries not collecting reliable statistics. It’s unimaginable then the devastation that a virus deadlier than COVID-19 would cause.

It only sounds scarier that the Rawalpindi laboratory where the virus is being reportedly developed is a “Biosafety Level 4” facility (BSL-4) headed by a two-star general. Such labs are used to study infectious agents and toxins that can cause life-threatening diseases for which there is no vaccine or therapy available, say experts.

However, Pakistan has denied the secret presence of a DSTO-run lab, which is said to be located in the Chakala cantonment of Rawalpindi. In 2020, when the first reports emerged the Foreign Office of Pakistan stated that “there is nothing secret” about it and said that the lab was Bio-Safety Level-3 (BSL-3) one, reported Geo-Politik.

According to Pakistan, the facility was meant for diagnostic and protective system improvement through Research and Development on emerging health threats, surveillance and disease outbreak investigation. It maintains that it has been sharing information about the facility with the United Nations’ Biological and Toxins Weapons Convention (BTWC), which prohibits the development of such weapons, as part of confidence-building measures (CBMs).

Those in the intelligence and scientific community, watching the developments, warn that by using Pakistan, China had outsourced a highly contagious network of laboratories where antigens a hundred times more infectious than the present COVID could be created and tested.

According to bioweapons experts, the collaboration between Pakistan’s lab, managed by the army, and a series of laboratories and institutions run by the Chinese People’s Liberation Army was not for scientific experiments but to weaponise pathogens, reports ANI. 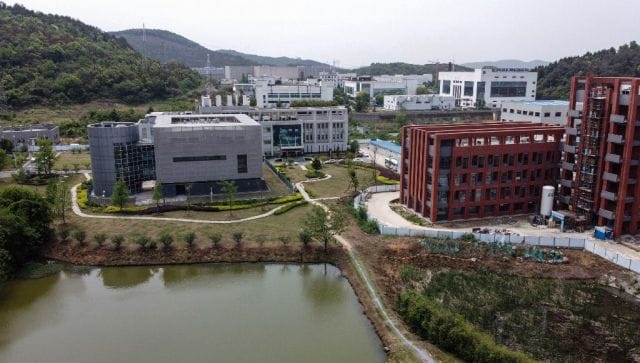 An aerial view shows the P4 laboratory at the Wuhan Institute of Virology in China’s central Hubei province. As the coronavirus spread, a theory emerged that SARS-CoV-2 ‘leaked’ from the Wuhan lab. AFP

As the coronavirus brought the world to a standstill, claims emerged that SARS-CoV-2 in fact “leaked” from the Wuhan Institute of Virology. The theory rests on the coincidence that the virus originated in a city with a laboratory that works on bat coronaviruses, reports The Conversation. Some of these bat coronaviruses are closely related to SARS-CoV-2 but not close enough to be direct ancestors.

It didn’t help that there was no way to detect the direct animal source that was involved in transferring the virus to humans. However, scientists have debunked the lab theory and said that the COVID pandemic began where the first cases were detected – at the Hunan Seafood Wholesale Market.

The Huanan market was the pandemic epicentre. From its origin there, the SARS-CoV-2 virus rapidly spread to other locations in Wuhan in early 2020 and then to the rest of the world, Professor Edward C Holmes from University of Sydney writes in The Conversation.

However, in October, Republicans in the United States Senate released a report on how the COVID-19 virus could have leaked from the Wuhan Institute of Virology (WIV).

According to the report titled titled ‘An Analysis of the Origins of the COVID-19 Pandemic,’ “nearly three years after the COVID-19 pandemic began, substantial evidence demonstrating that the COVID-19 pandemic was the result of a research-related incident has emerged.” It also revealed that a research-related incident is consistent with the early epidemiology showing the rapid spread of the virus in Wuhan, with the earliest calls for assistance being located near the WIV’s original campus in central Wuhan.