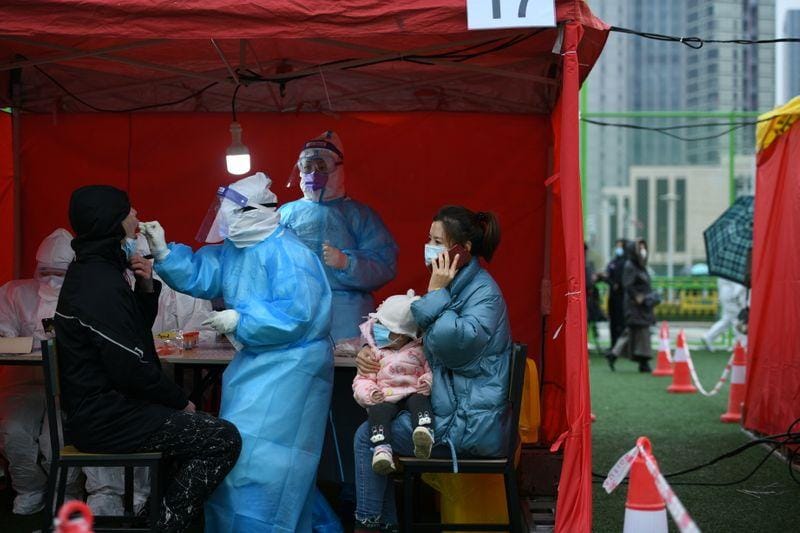 SHANGHAI (Reuters) - China recorded 22 new COVID-19 infections on Nov. 23, up from 11 a day earlier, the country's health authority said, while an official from the city of Tianjin said two confirmed cases this month caught the virus from pig heads from North America.

The National Health Commission said on Tuesday 20 of the new cases were imported infections that originated overseas. One local transmission was reported in Shanghai and another in Tianjin.

The Shanghai case together with a second one reported earlier in the city have been traced to a container from North America, which the two men cleaned when it arrived at an airport, according to the Shanghai Daily.

The latest infection in Tianjin was previously an asymptomatic case, according to state media.

Later on Tuesday, a Tianjin health official said two confirmed cases in the northern port city earlier this month had caught the virus from pig heads arriving from North America.

Zhang Ying, an official at the Tianjin Center For Disease Control and Prevention, told a press conference that authorities had not tested the pig heads in question.

However, samples taken from the spots where the heads fell when they were being moved out of storage tested positive for the same strain of the virus as the two confirmed cases, who had both been exposed to the pig heads, Zhang said.

Tianjin authorities said earlier this month they would carry out tests on some cold storage facilities and staff after a coronavirus case involving a worker who had handled frozen pork imported from Germany. China says it has repeatedly detected the virus in imported meat and packaging.

The National Health Commission also reported eight new asymptomatic cases, which China does not classify as confirmed cases, as of Monday, compared with 10 a day earlier.

The total number of confirmed COVID-19 cases in mainland China now stands at 86,464, while the death toll remains at 4,634.

(Reporting by Jing Wang and Engen Tham with additional reporting by Tom Daly; Editing by Stephen Coates and Mark Heinrich)