By Marion Giraldo EASTER ISLAND, Chile (Reuters) - Ludovic Burns Tuki first felt the chill of climate change while diving in the waters around his home on Easter Island, locally known as Rapa Nui, a remote land mass in the South Pacific famed for its distinctive ancient stone statues. The Polynesian diver has swum in these waters all his life, but found himself recently needing to wear a wet suit as water temperatures have dropped around the island, which sits isolated some 3,700 kilometres (2,299 miles) west of continental Chile. 'We are facing a problem that is becoming a reality 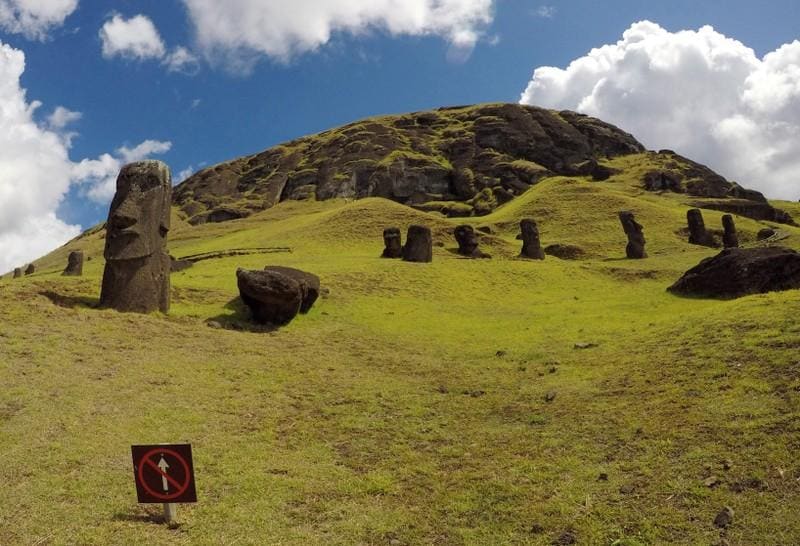 EASTER ISLAND, Chile (Reuters) - Ludovic Burns Tuki first felt the chill of climate change while diving in the waters around his home on Easter Island, locally known as Rapa Nui, a remote land mass in the South Pacific famed for its distinctive ancient stone statues.

The Polynesian diver has swum in these waters all his life, but found himself recently needing to wear a wet suit as water temperatures have dropped around the island, which sits isolated some 3,700 kilometres (2,299 miles) west of continental Chile.

"We are facing a problem that is becoming a reality. In the years that I have been a diver, I have seen changes that are affecting us all along the coasts," Burns Tuki, who heads the local environmental association Mesa del Mar, told Reuters.

The famed island is starting to feel the impact of climate change, from the cooler waters caused by fluctuating global temperatures to a record drought, which has drained the island's wetlands and put its freshwater reserves at risk.

Added to this are more intense swells, soil loss due to erosion, booming tourist activity and the pollution by tons of plastic garbage that revolve around the most remote inhabited island in the world.

"The first sign of climate change here on the island is the fact that the wetlands have completely dried up," Tahira Edmunds, a local adviser at Chilean government-linked development agency CONAF, said in an interview with Reuters.

"We feel affected by everything that happens in the world and here on the island it hits us a lot," he said.

The cold waters of the last few years are explained by climate studies suggesting that unlike other parts of the planet, this part of the Pacific Ocean will cool at a rate close to 0.15 degree Celsius (0.27 degree F) per decade.

"I talked to people who told me they could feel the sea was colder from around four years ago," said oceanographer Marcel Ramos, a researcher at Milenio Nucleus ESMOI, which collects data to support public policies on ocean conservation.

Easter Island, which attracts visitors with its more than 1,000 stone sculptures erected by the local Rapa Nui people, is one of the six heritage sites most vulnerable to climate change in the world, according to a UNESCO report.

Fiercer sea swells are eroding parts of the shore and the island is getting less rainfall, making 2017 the driest year on record. Last year was only slightly better.

The Raraku lagoon, a fresh water source on the island, has started to dry up in summer, stopping it from being used for ancestral swimming competitions during the Rapa Nui festivities that go back centuries.

Chile's government has commissioned studies with projections for the next decades that will include territories such as Easter Island for the first time.

"It has been established the main variables (that will affect the island) will be the decrease in rainfall and the increase in swells," Carolina Urmeneta, head of the climate change office of the Ministry of the Environment, told Reuters.

On the uninhabited island of Salas & Gómez, just northwest of Easter Island, researchers say birds - seen as a biological beacon about what will happen in subtropical ecosystems - are facing another threat: plastic waste.

Terns, frigates and farcelas - including the Manutara, the symbolic bird in ancestral Rapa Nui rituals - now "adorn" their nests not with algae or stones, but with garbage. Baby chicks have been found dead in the nests, entangled in plastic.

"We found dead chicks in the nests because they were trapped in twine and plastic trash when they wanted to fly," Guillermo Luna, biologist and oceanic bird expert, told Reuters.

The islands make up the largest marine protected area in Latin America, but their biodiversity is threatened by tons of floating garbage from the nearby "South Pacific Gyre," one of the five garbage patches that exist in the world's oceans.

The plastic also impacts species of turtles and Polynesian fish such as the nanue "rudderfish," a key part of local diets.

It is estimated that some 19,000 tons of non-organic garbage float in the sea around Rapa Nui, but the volume is difficult to calculate because the plastic is fragmented and is eaten by fish and birds.

Climate change has not stymied the island's main economic driver: a booming tourism industry that brings cruise ships and thousands of tourists to the island.

Tourism data shows the island received over 130,000 tourists in 2018, up about a third from five years ago. That helped bring in revenues of close to $100 million last year, figures from the Mayor's office show.

The rise in visitors has prompted the Rapa Nui ethnic group to put in place a law regulating how long visitors can stay, aimed at protecting the environment and archaeological sites.

Local communities are also looking to focus on a type of tourism that promotes sustainable development and its archaeological remains, and that maintains the characteristics of the Rapa Nui culture.

"To get to such a distant place and not see, for example, a Starbucks, is part of the essence of Rapa Nui," Uko Tongariki Tuki, the municipality's tourism chief, told Reuters. "We are struggling not to have that."