By Dave Sherwood and Fabian Cambero SANTIAGO (Reuters) - Chile's finance minister predicted on Thursday that as many as 300,000 jobs could be lost because of the impact of four weeks of rioting on one of Latin America's strongest economies. Newly appointed Finance Minister Ignacio Briones told a legislative committee it was 'highly likely' unemployment would jump 3% in the coming months, Diario Financiero reported. 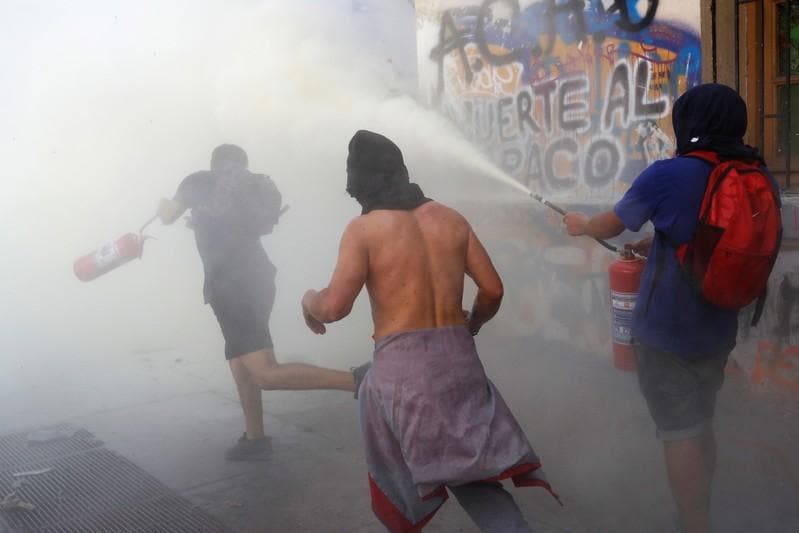 SANTIAGO (Reuters) - Chile's finance minister predicted on Thursday that as many as 300,000 jobs could be lost because of the impact of four weeks of rioting on one of Latin America's strongest economies.

The peso currency, which hit a historic low on Thursday, also raised the spectre of a hike in fuel costs, Briones told reporters outside the committee.

"Fuel prices are going to rise, it can't be any other way," he said.

The past month's protests started over a hike in public transport fares but have broadened to encompass grievances over low wages, the high cost of living and social inequality.

Demonstrators gathered in public squares on Thursday for another round of protests, which have paralysed daily life. At least 24 people have died and thousands injured in clashes between protesters and police.

On Thursday, the health ministry announced an alert across six of Chile's 16 regions to release extra funding amid a surge of 10,000 trauma cases and an unspecified increase in people seeking treatment for mental health issues.

The ministry did not link the health issues to the protests, but said they were due to "a situation of high health risk to the population".

It also raised concerns about the health implications of a Santiago-wide strike announced by trash collectors, which has seen waste mount on the streets in recent days.

President Sebastian Pinera announced a state of emergency as riots took hold, then a costly new social plan. He reshuffled his government and appealed for Chileans to subscribe to national accords around justice, equality and peace.

The police have been criticized for their handling of the demonstrations, with medical experts saying that more than 200 protesters have suffered eye injuries or been blinded by tear gas canisters and rubber bullets. This week, the police chief said he would fit firearms officers with surveillance cameras and deploy more human rights experts.

Ana Piquer, the executive director of Amnesty International Chile, said Pinera should respond to the many complaints of police excesses.

"We don't want to see any more victims of police violence anywhere in Chile, killed or seriously injured simply for raising their voice on social demands," she said.

Thursday's protests were pegged to the anniversary of a young indigenous man who was shot dead by police in circumstances that are still under investigation.

The father of Camilo Catrillanca, a Mapuche man from the southern Araucania region, which has long been in conflict with the state, appealed to people to demonstrate "calmly."

Camilo Catrillanca, the grandson of an indigenous leader, was shot in the head in November 2018 in a police operation in a rural community near the town of Ercilla.

Catrillanca's death - and subsequent accusations of a cover-up - led to protests throughout Chile. Four police offers are due to go on trial on charges of homicide and obstruction of justice later this month.

Kattya Barrera, 19, of Santiago's low-income La Florida neighbourhood said she believed nothing had changed since Catrillanca's death. "When someone goes out to demonstrate, they take out their eyes," she said. "Today isn't just about Catrillanca, it's for everyone."