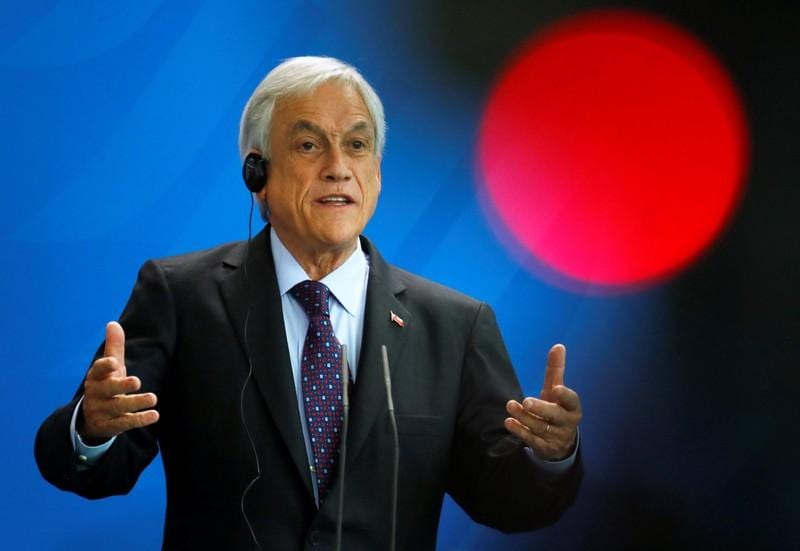 SANTIAGO (Reuters) - President Sebastian Pinera said on Friday that justice would be served following a controversial police raid that last week ended in the shooting death of an indigenous Mapuche man in the restive Araucania region of south-central Chile.

Pinera told reporters on a visit to the region that the unresolved shooting would not stall a previously announced $24 billion plan to bring an end to a long-running conflict between the Mapuche and the Chilean state.

The region's Mapuche indigenous residents accuse the state and private companies of taking their ancestral land, draining its natural resources and using undue violence against them. Their communities are among the poorest in Chile.

"We can't fall in the trap of going to extremes here. We need dialogue, collaboration, and agreements, but only with those who are seeking... peace," Pinera said.

The president's schedule was largely kept secret amid security concerns in the hilly, heavily forested region, which has seen several protests, assaults and arson incidents this week.

Pinera said he had met with a group of schoolteachers who had been assaulted immediately prior to the police raid, as well as the local bishop and several Mapuche indigenous leaders.

"Those that want to impose their will with force and violence, without respect for anything or anybody, we will pursue them with the full force of the law," he said.

The president's visit to the Araucania comes one week after Camilo Catrillanca, the grandson of a local indigenous leader, was shot in the head during a police operation in a rural community near the town of Ercilla, 480 miles south of Santiago.

Chilean police initially said it was unclear who shot Catrillanca because none of the members of the special forces unit that handled the raid had worn body cameras.

But one of the policemen involved was later spotted in media footage wearing a camera. The policeman told investigators he had destroyed the camera's memory card.

Local prosecutors launched an investigation earlier this week at the behest of the Pinera administration to determine who shot Catrillanca, and why.

"We don't want the death of Camilo Catrillanca to be in vane," Pinera said. "We want it to permit us to understand the importance of coming to agreement... in the recovery of peace and public order."