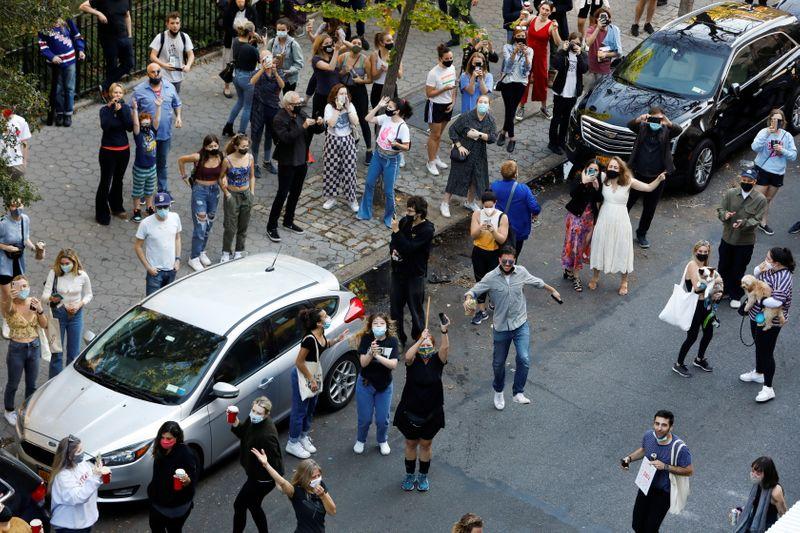 By Aram Roston and Mark Makela

Minutes after major television networks declared Biden the winner following four nail-biting days since Tuesday's election, hundreds of people, most of them wearing face masks to prevent the spread of COVID-19, streamed to the White House to celebrate outside a security fence as the sound of booming fireworks was heard in the distance.

"I was on the bus and I jumped off the bus to come right down here to the White House," said Donna Thomas, a resident of Washington. "It is something to celebrate. We have been waiting so long."

Streets were closed to traffic as Biden supporters marched with an assortment of LGBTQ, Black Lives Matter and American flags. Some carried a giant balloon of Trump in the shape of a rat.

In Washington's Petworth neighborhood, Kool & the Gang's "Celebration" and Curtis Mayfield's "Move on Up" could be heard playing loudly as neighbors hooted and cars sounded their horns.

Loud cheers erupted in the halls of the hotel where Biden aides are staying in Delaware. "Worth every minute (of the wait)", a Biden aide said. Campaign staff exchanged elbow bumps and air hugs in the hotel lobby.

The sun was shining in Philadelphia, where Biden's 80.8% to 18.3% margin over Trump tipped the election in the Democrat's favor.

In New Orleans, Dana Clark, an African-American woman who stood in line for more than eight hours to cast her vote for Biden, all the while holding her 18-month-old son, Mason, in her arms, said she was overjoyed.

"I'm at my older son's soccer game right now, and I just started running all around the field when I saw the news," Clark said.

In Atlanta, shouts, cheers and fireworks rang out in the Democratic stronghold of East Atlanta Village as word spread that Biden was named the winner.

Atlanta nurse and life-long Democrat Emily Dietl, 36, said she felt relieved, but was curious to see how Trump would respond.

"He won't be gracious, I'll tell you that," Dietl said.

Trump, who has made repeated claims of electoral fraud without providing evidence, immediately accused Biden of "rushing to falsely pose as the winner."

"This election is far from over," Trump said in a statement.

Some of Trump's supporters were not ready to stand down either.

In Harrisburg, Pennsylvania, the state that put Biden over the 270 Electoral College votes he needed for victory, about 100 pro-Trump "Stop the Steal" protesters demonstrated in front of the State Capitol building, facing off against about the same number of Biden supporters.

Hundreds of Trump supporters gathered on the steps of the Michigan State Capitol in Lansing on Saturday, waving Trump-Pence flags to shouts of "This is not over" and "We will be here forever."

At the Arizona State Capitol in Phoenix, tensions were running high as supporters of the Republican president, some carrying firearms, showed up by the hundreds, chanting "Trump won" and "We will win in court." They blamed the media for declaring Biden the winner. "The media is part of the coup!" one protester shouted.