Madrid: The former speaker of Catalonia's sacked parliament Carme Forcadell appeared on Thursday  at Spain's Supreme Court over her role in the region's controversial independence drive. A judge may decide to detain Forcadell and five former lawmakers on charges of sedition, rebellion and misuse of public funds after Catalan lawmakers voted last month to split from Spain. 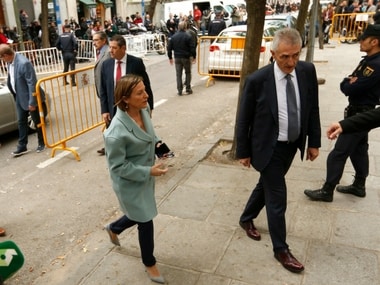 They are suspected of having followed a "concerted strategy to declare independence", before the official declaration of the Catalan parliament on October, deepening Spain's most serious political crisis in decades. That declaration was annulled Wednesday by Spain's constitutional court.

The Supreme Court could decide to place Forcadell and the former MPs in pre-trial detention, joining some Catalan leaders who organised a referendum on independence last month.

Outside the court on Thursday a small group of protesters gathered, holding banners against independence and declaring Wednesday's general strike in Catalonia a "total fiasco".

A judge in Madrid last week ordered eight separatist politicians to be remanded in custody over their secession drive. Catalonia, a region of 7.5 million people that accounts for a fifth of Spain's GDP, is deeply divided over independence.