By Nichola Saminather and David Ljunggren TORONTO/OTTAWA (Reuters) - Canadian ex-diplomat Michael Kovrig, who was detained in Beijing earlier this week, is a fluent Mandarin speaker with a great love of China who has travelled to some of the most sensitive parts of the Asian country, people who have worked with him said. Kovrig is one of two Canadians being investigated on suspicion of harming China's security 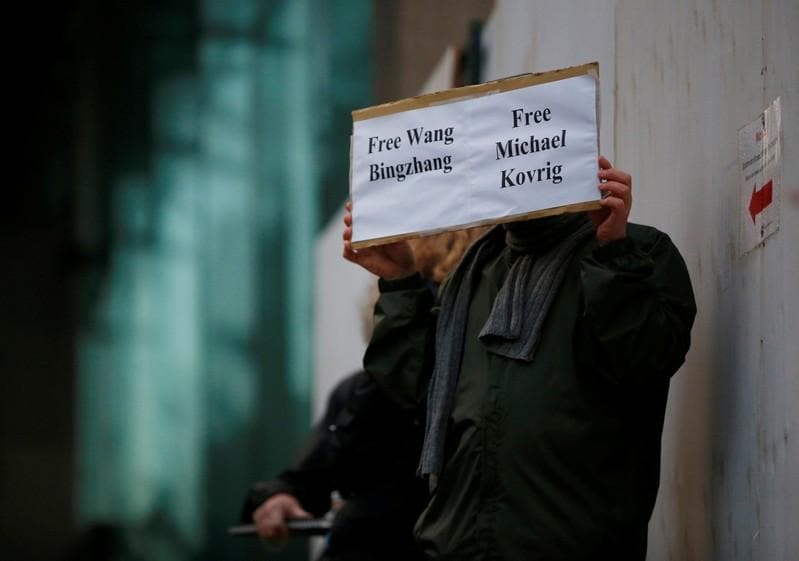 By Nichola Saminather and David Ljunggren

TORONTO/OTTAWA (Reuters) - Canadian ex-diplomat Michael Kovrig, who was detained in Beijing earlier this week, is a fluent Mandarin speaker with a great love of China who has travelled to some of the most sensitive parts of the Asian country, people who have worked with him said.

Kovrig is one of two Canadians being investigated on suspicion of harming China's security. They were picked up shortly after Canada arrested a senior Chinese executive at the request of the United States.

Stationed at the Canadian embassy in Beijing from 2014 to 2016, Kovrig served under former ambassador Guy Saint-Jacques, who described him as an excellent political officer.

Kovrig has visited the western Xinjiang region, site of mass detentions and strict surveillance of the ethnic Uighur minority and other Muslim groups, and dealt with other sensitive issues, said Saint-Jacques.

"When you meet with dissidents, you get the attention of the Chinese security establishment," he told the Canadian Broadcasting Corp.

At the end of his two-year posting, Kovrig told the envoy he wanted to stay on because "he loves China so much." He joined the Hong Kong-based International Crisis Group, a think tank focused on conflict resolution.

"He really is passionate about China, its language and its culture," said Karim Lebhour, head of ICG's North American communications in Washington, who said he had met Kovrig a few months ago. "He struck me as very professional, very easy to engage with and a brilliant foreign policy mind."

One area Kovrig focused on was North Korea, where Michael Spavor - the other detained Canadian - was also active.

Kovrig is still technically employed by the Canadian foreign affairs department but because he took a leave of absence, he does not have diplomatic immunity.

"The fact that Mr. Kovrig is an employee of my department means a lot of us know him and that adds another layer to the concern," Foreign Minister Chrystia Freeland told reporters on Wednesday.

Joanna Chiu, a reporter for the Toronto Star, wrote in the paper on Tuesday that she had met and befriended Kovrig while she was working in Beijing four years ago.

"Michael is emotionally very open. Many in his social circle knew that he struggled with his decision to take a leave of absence from work as a diplomat in 2016," she wrote.

"He chose to do so because he didn't want another posting somewhere else. He wanted to stay in China and keep learning more about the country."

Kovrig's most recent social media post was on Sunday. His family heard about his detention on Tuesday morning, his cousin Kate Kovrig said in a message on LinkedIn on Tuesday.

Kovrig began his diplomatic career in 2014 as the first secretary and vice-consul at the Canadian Embassy in Beijing, following two years of Mandarin training, his LinkedIn profile showed.

Most of his Twitter posts are China-related, including several on Canada's arrest of Huawei's chief financial officer. Retweeting an FT opinion piece last week arguing that Huawei should be kept out of Britain's 5G networks for security reasons, he commented: "Sensible cautionary advice on Huawei."