By David Ljunggren HAMILTON, Ontario (Reuters) - Canadian Prime Minister Justin Trudeau pledged on Monday to create a national prescription drug plan if re-elected, moving back on the offensive after blackface photos of him emerged last week and hurt his campaign. After two days of profuse apologies, Trudeau has resumed making campaign announcements as polls show his Liberals trailing the opposition Conservatives of Andrew Scheer slightly ahead of the Oct. 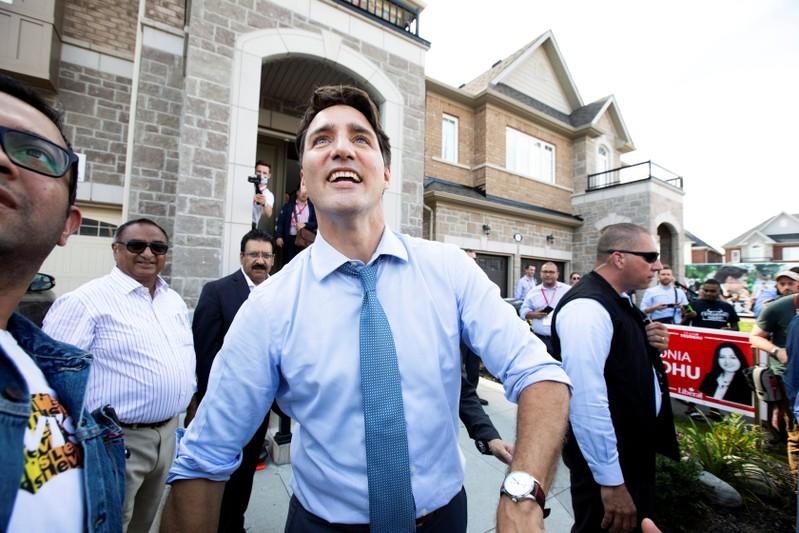 HAMILTON, Ontario (Reuters) - Canadian Prime Minister Justin Trudeau pledged on Monday to create a national prescription drug plan if re-elected, moving back on the offensive after blackface photos of him emerged last week and hurt his campaign.

After two days of profuse apologies, Trudeau has resumed making campaign announcements as polls show his Liberals trailing the opposition Conservatives of Andrew Scheer slightly ahead of the Oct. 21 election.

Trudeau, accusing the Conservatives of planning major spending cuts, said he would make sure all Canadians had access to a family doctor and affordable medicine.

"No one should go without the care they need because they don't have access to a family doctor. And no one should have to give up food and heat to be able to pay for healthcare," Trudeau told reporters in the southwestern Ontario city of Hamilton.

Canada's universal healthcare system does not include universal coverage for prescription drugs, and primary care doctors are scarce in many areas.

The cost of the proposal would be about C$6 billion ($4.52 billion) over four years, and Ottawa would work with the 10 provinces and three northern territories to implement the changes, Trudeau said.

The healthcare pledge was his fourth major campaign announcement since last Friday, when he vowed to ban military-style assault weapons. On Sunday he pledged to eliminate some taxes and slash cellphone bills by a quarter.

The ruling Liberals were knocked off course by old photos of Trudeau in blackface that emerged last week. The images were at odds with his oft-stated position that he wants to improve the lot of minorities in Canada and prompted international ridicule.

Foreign Minister Chrystia Freeland, the most visible member in Trudeau's Cabinet, told Reuters on Friday that the prime minister had her full confidence. Other Cabinet members, legislators and candidates have also made it clear the Liberal Party is standing squarely behind its leader.

But Trudeau still faced more questions about the photos on Monday, five days after Time magazine released the first picture.

"I am continuing to be open with Canadians about the mistake I made ... I should have known better but didn't," he said.

Tejinder Singh, who is of Indian descent, said the pictures will not change his vote. "He has been very good to us. I am not interested in the photos. We support him," Singh said in the town of Stoney Creek, east of Hamilton, earlier on Monday.

Conservative rival Scheer, speaking outside Toronto, pledged on Monday to allow a 30-year mortgage - up from 25 years - for first-time homebuyers and to review the mortgage stress test they must face when seeking to buy a home.

Opinion polls initially showed a significant dip for the Liberals, according to pollster Frank Graves of EKOS Research, but he said it was fleeting because voting intentions are already shifting back toward where they were before the picture emerged.

Conservatives would win 34.3% of the national vote and the Liberals 33.1%, a Nanos Research poll for CTV and the Globe and Mail newspaper released on Monday showed.

Liberal insiders are somewhat optimistic, noting that relatively few voters are bringing up the topic. A pollster noted that the election is still a month away.

"The blackface photos may be the campaign moment that prevents the Liberals from being re-elected. But the initial reaction and how voters are reacting so far suggests there's way too much campaign left to make that conclusion today," said David Coletto of the Abacus polling firm, which has Conservatives leading the Liberals by 2 percentage points nationally, the same margin as last week.

Meanwhile Green Party leader Elizabeth May, during a campaign stop on Canada's east coast, urged voters to choose the Greens in order to prevent either major party from being able to form a government without the support of smaller blocs like hers.

"They can't be trusted," she said of the mainstream parties. "We will keep our promises."

(Reporting by David Ljunggren in Hamilton, Ontario, and Steve Scherer in Ottawa, additional reporting by Moira Warburton in Toronto; Editing by Andrea Ricci and Matthew Lewis)