By Steve Scherer and David Ljunggren OTTAWA (Reuters) - Canadian Prime Minister Justin Trudeau is weighing sweeping changes to the country's social welfare system and a series of economic measures that will align Canada with ambitious climate goals, according to people familiar with the matter. The plan to bolster the social safety net will especially help those hurt most by the pandemic and come after Trudeau replaced a fiscally cautious finance minister. 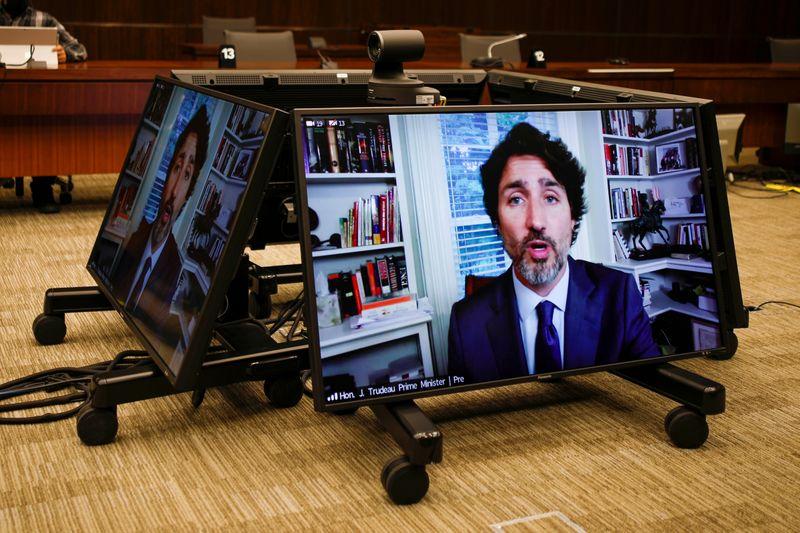 OTTAWA (Reuters) - Canadian Prime Minister Justin Trudeau is weighing sweeping changes to the country's social welfare system and a series of economic measures that will align Canada with ambitious climate goals, according to people familiar with the matter.

The plan to bolster the social safety net will especially help those hurt most by the pandemic and come after Trudeau replaced a fiscally cautious finance minister.

"The prime minister wants to go big," said a government source, adding that Trudeau, 48, sees the moves as part of his legacy.

Trudeau said the pandemic had unmasked "fundamental gaps" in society and the country needed a long-term recovery plan that addressed issues head on.

Trudeau said he would seek a confidence vote in parliament over his plan when the body reconvenes in September.

Cabinet minister and close Trudeau ally Dominic LeBlanc said the plan "will contain a number of positive ideas that opposition parties have been talking about."

These include measures on childcare, access to quality housing and an expanded employment insurance program," he told the Canadian Broadcasting Corp on Wednesday.

Trudeau took office in 2015 and was re-elected last year, with a minority government. The son of former Prime Minister Pierre Trudeau, Trudeau has focused on boosting social programs, raising taxes on the highest earners and stressing the need to fight climate change.

Canada's economy has been crippled by the COVID-19 pandemic, and Trudeau's government has spent billions on support and other measures to alleviate the worst of the pandemic lockdown. But Ottawa has so far not mapped out a sweeping economic strategy.

"The taps are really going to be turned on," said a fiscally conservative Liberal concerned that spending could get out of hand. "That's the biggest risk."

Freeland said on Tuesday she wanted a green, fair and inclusive restart plan.

"She is a social interventionist activist, so she believes in the power of government and also believes in the redirection of funds to those who need it most," said one Liberal who has worked closely with Freeland.

Trudeau said he would not abandon fiscal sense even as he tries to balance economic inequities "because we know government needs to be responsible in building the future."

(Reporting by Steve Scherer and David Ljunggren, with additional reporting by Kelsey Johnson; Editing by Cynthia Osterman and Steve Orlofsky)