By Moira Warburton (Reuters) - Canadian police were using drones and dogs to scour harsh terrain in northern Manitoba on Thursday in the search for two teenagers wanted in the killings of three people, including an American woman and her Australian boyfriend. Late on Wednesday, the Royal Canadian Mounted Police charged Kam McLeod, 19, and Bryer Schmegelsky, 18, with the second-degree murder of Leonard Dyck, 64, a botany professor at the University of British Columbia in Vancouver 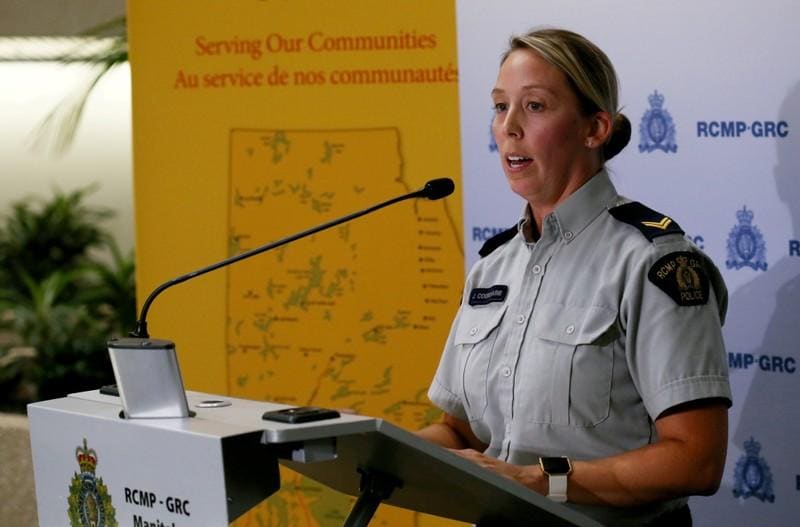 (Reuters) - Canadian police were using drones and dogs to scour harsh terrain in northern Manitoba on Thursday in the search for two teenagers wanted in the killings of three people, including an American woman and her Australian boyfriend.

Late on Wednesday, the Royal Canadian Mounted Police charged Kam McLeod, 19, and Bryer Schmegelsky, 18, with the second-degree murder of Leonard Dyck, 64, a botany professor at the University of British Columbia in Vancouver.

The pair were originally reported as missing last Friday but were later described as suspects in the killing of Chynna Deese, 24, of Charlotte, North Carolina, and her boyfriend, Lucas Fowler, 23, of Sydney, Australia.

The Globe and Mail reported that Schmegelsky and McLeod had been linked to social media accounts and chatrooms promoting far-right-wing ideology and communism, including on YouTube and Steam, a video-game distribution platform.

"This is very challenging terrain, this is a large area, there's a lot of dense bush, swampy areas," Julie Courchaine, media relations officer for the RCMP, told a news conference. "The police officers that are up there are trained for these types of situations."

Courchaine said police were using all available technologies, including drones, in the manhunt as well as dogs and emergency responders.

The sightings took place before the vehicle the suspects were known to be driving was found in flames on the side of a highway outside Fox Lake Cree Nation, 55 km (34 miles) north of Gillam.

The RCMP said no cars had been reported stolen in the area that could be attributed to the pair, which led them to believe they were still in the Gillam area.

Al Schmegelsky, father of Bryer Schmegelsky, told the Canadian Press on Wednesday that his son did not know how to drive and described the pair as "survivalists."

Saying his son was on a "suicide mission," he added:

"Basically, he's going to be dead today or tomorrow. I know that. Rest in peace, Bryer. I love you. I'm so sorry all this had to happen."

(Reporting by Moira Warburton in Toronto; Editing by Peter Cooney)