By Steve Scherer OTTAWA (Reuters) - COVID-19 infections have surged in Canada and if people do not take stringent precautions, they could balloon to exceed levels seen during the first wave of the pandemic, health officials warned on Monday. 'Canada is at a crossroads and individual action to reduce contact rates will decide our path,' the Public Health Agency said in a statement. 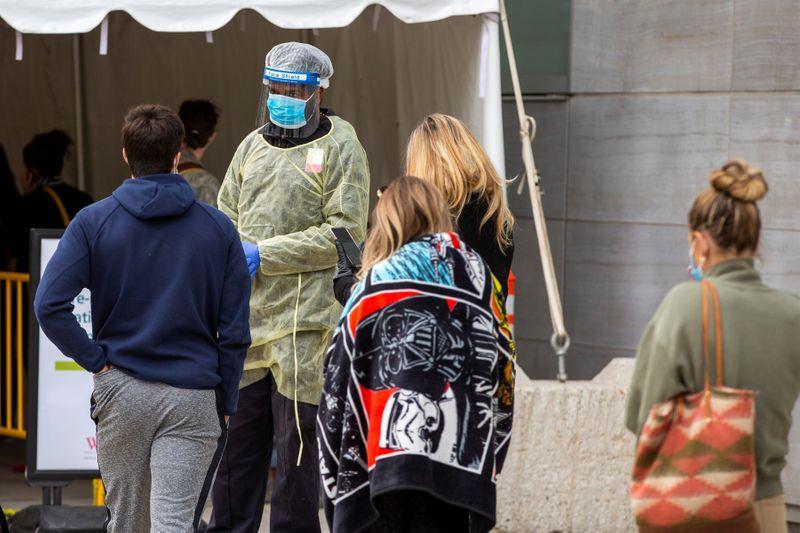 OTTAWA (Reuters) - COVID-19 infections have surged in Canada and if people do not take stringent precautions, they could balloon to exceed levels seen during the first wave of the pandemic, health officials warned on Monday.

"Canada is at a crossroads and individual action to reduce contact rates will decide our path," the Public Health Agency said in a statement.

Prime Minister Justin Trudeau will appear in a rare evening national broadcast at 6:30 p.m. (2230 GMT) on Wednesday to talk about "the urgency of fighting COVID-19 as we face down the prospect of a second wave of the virus," the prime minister's office said.

Canada's chief public health officer, Dr. Theresa Tam, outlined three scenarios for the spread of the new coronavirus between now and January 2022, with the most favorable being a slight uptick now and then a "slow burn" through next year.

That result requires active case detection and tracing, plus individuals taking the necessary health precautions. However, if action is not taken, the outcome could be disastrous, Tam said.

"With minimum controls, the virus is capable of surging into a very sharp and intense peak ... (that) could overwhelm our health system capacity and significantly impact our social and economic systems as well," she said.

Even with enhanced detection and tracing, people must take precautions or else cases could "far" exceed the spring peak, Tam said.

Tam's are the latest in a series of warnings from health officials across Canada that the spread of the disease is gaining momentum.

Tam said this surge is different from the first because young people are behind the spread, but she cautioned that eventually "that is going to spill over into high-risk populations".

Anand said Canada had signed a deal with Sanofi and GSK

Getting a flu shot will help "take the load and the burden off the backs of the hospitals and doctor's offices" during a surge in the coronavirus, Ford said.