By Andrew Hay (Reuters) - California firefighters made progress Wednesday containing some of the largest wildfires in state history but reported a jump in the number of homes destroyed by blazes, which have killed seven people statewide. Cooler temperatures helped firefighters battle the largest blazes in the San Francisco Bay Area as state wildfire authority Cal Fire reported 1,700 houses and other structures now incinerated across the state. A wildfire in redwood rainforests north of Santa Cruz was one-fifth contained with the number of structures incinerated rising over 60 percent to 538, Cal Fire said. 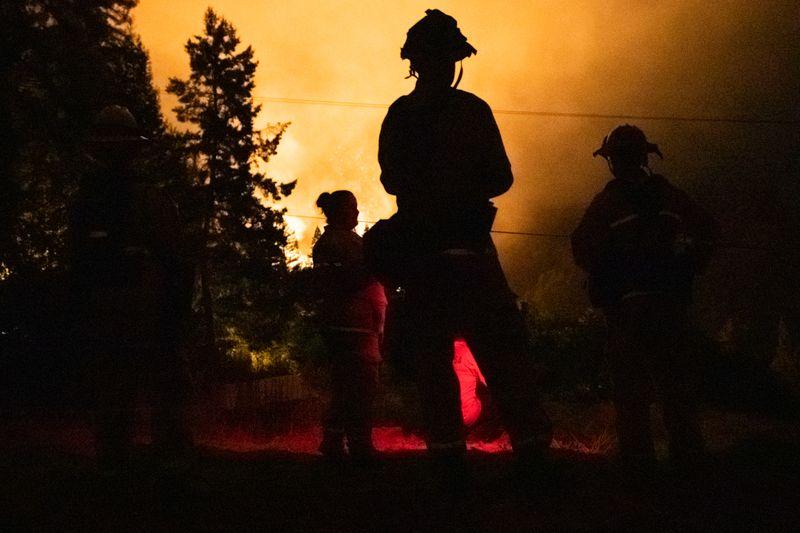 (Reuters) - California firefighters made progress Wednesday containing some of the largest wildfires in state history but reported a jump in the number of homes destroyed by blazes, which have killed seven people statewide.

A wildfire in redwood rainforests north of Santa Cruz was one-fifth contained with the number of structures incinerated rising over 60 percent to 538, Cal Fire said.

"Our home and a lifetime of art, photos and treasured family things are completely lost," tweeted social media user Cheryl Isaacson after her house was burned by the CZU Lightning Complex fire.

Across Northern and Central California over 15,000 firefighters from half a dozen states battled two dozen large fires sparked by a siege of over 14,000 dry-lightning strikes since Aug. 15.

California Governor Gavin Newsom on Monday blamed climate change for the 1.4 million acres of the state burned so far in 2020, an area 25 times larger than this time last year.

In the north Bay Area, nearly 1,000 homes and structures, many in farms and vineyards, were incinerated in the wine country of Napa, Sonoma and Solano counties.

Television images showed piles of rubble and gray ash where homes had stood after the LNU Lightning Complex fire raged across hillsides around Lake Berryessa, about 40 miles west of Sacramento.

In the south Bay Area evacuation orders were lifted for communities in Santa Clara, San Joaquin and Alameda counties where the state's second largest fire in history was 25 percent contained after burning an area larger than Los Angeles.

Statewide the number of people under evacuation orders fell to around 120,000.