By Nichola Groom (Reuters) - While more than half of California’s forests fall under federal management, the U.S. Forest Service consistently spends fewer dollars than the state in managing those lands to reduce wildfire risks, a Reuters data analysis reveals. The relative spending by federal and state forest authorities undermines President Donald Trump’s repeated attempts to blame deadly wildfires on a failure by California to clear its forests of dead wood and other debris. 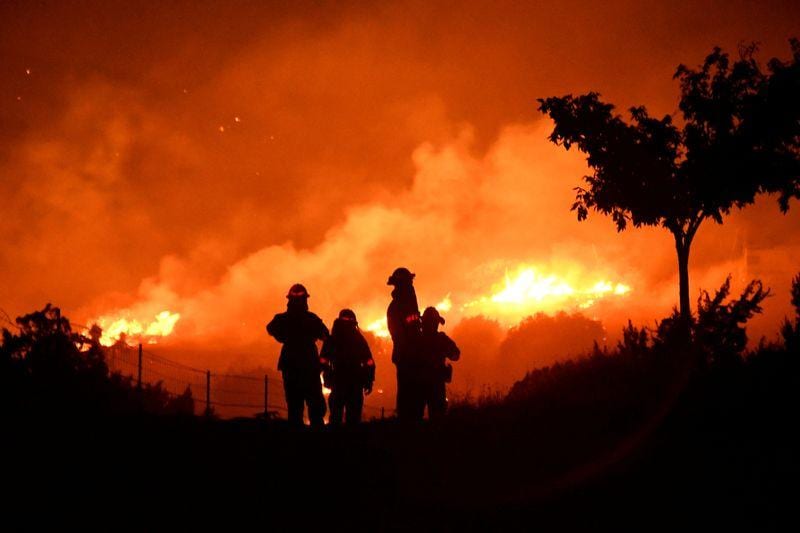 (Reuters) - While more than half of California’s forests fall under federal management, the U.S. Forest Service consistently spends fewer dollars than the state in managing those lands to reduce wildfire risks, a Reuters data analysis reveals.

The relative spending by federal and state forest authorities undermines President Donald Trump’s repeated attempts to blame deadly wildfires on a failure by California to clear its forests of dead wood and other debris.

In fact, the bulk of California’s forest management falls under federal jurisdiction, with the U.S. Forest Service owning 57% of California’s 33 million acres of forests. Yet, for the fiscal year 2020, the agency spent $151 million treating 235,000 acres with practices like controlled burns meant to reduce wildfire risks, according to figures provided by the service.

By contrast, California’s government spent $200 million on forest management work, and oversaw treatment of 393,282 acres of state-run and privately-held land, according to figures provided by the California Department of Forestry and Fire Protection.

The Forest Service suspended its wildfire-prevention efforts for six weeks this spring, saying it was concerned about the safety of its personnel during the coronavirus pandemic. State fire officials at the time decried the move as risky. (Story here https://www.reuters.com/article/us-health-coronavirus-usa-wildfires/trump-administration-halts-wildfire-prevention-tool-in-california-over-coronavirus-idUSKCN21X1HD)

"We need the federal government to really come in and spend at a much more significant level and make a real investment," said Jessica Morse, deputy secretary for forest resources management with the California Natural Resources Agency. "Because they own this forestland."

Just over half of the acreage burned in wildfires in the state since 2015 has been on federal lands belonging to the Forest Service and other agencies, according to a Reuters analysis of data from the National Interagency Fire Center.

The Forest Service declined to comment, but directed Reuters to an agreement it inked with California last month to treat 500,000 acres per year each in the state by 2025. Last week before Congress, a senior forest service official said the federal government should dramatically increase its fire prevention efforts in California.

As concerns mounted about more frequent and severe seasonal fires, California ramped up its annual spending on forest fire prevention work to $200 million in the 2018 fiscal year from $40 million, according to a 2018 state report.

The U.S. Forest Service said it expects to spend around $250 million a year under its agreement with the state to treat half a million acres a year.

Scientists have said climate change is worsening natural disasters like wildfires, droughts, floods and storms by adding heat to the atmosphere and altering weather patterns.

Trump’s administration has downplayed the impact of climate change, voiced doubts on the science of global warming, loosened environmental regulations and advocated for boosting U.S. production of fossil fuels.

California officials say some of the state's recent forest management efforts have shown evidence of helping slow the spread of the megafires currently burning on federal land.

This month's massive Creek Fire burning in the Sierra National Forest, for instance, became easier to fight when it spilled into utility-owned lands on which state fire and utility crews had removed dead trees and performed controlled burns in the last two years, according to Ryan Stewart, forester for Southern California Edison's 20,000 acres near its Big Creek hydroelectric power plant.

"The fuels weren't there," Stewart said in an interview, estimating the work saved thousands of acres from the fire.

California estimates that 9 million acres of U.S. Forest Service lands in the state need treatment to maintain forest health, according to a policy document from 2018 prepared by representatives from several state agencies.

About 163 million trees have died in the state in the last decade due to drought and bark beetle infestation, mainly in the Sierra Nevada mountain range, creating huge swaths of flammable material, according to a 2019 Forest Service survey.

Last week, a Forest Service official said the agency needed to double or triple its efforts in the fire-prone state.

“We're working really hard but we know it's not nearly enough," Chris French, national forest system deputy chief, said in testimony before the Senate Committee on Natural Resources. "In places like California it means treating two to three times more acres per year than our current actions."