By Dan Whitcomb LOS ANGELES (Reuters) - Crews fought on Tuesday to defend homes and the famed Mount Wilson Observatory from California's biggest and most dangerous wildfire, standing their ground at a major highway between the flames and populated areas. The Bobcat Fire, which broke out Sept. 6 in the Angeles National Forest north of Los Angeles, has already blackened an area larger than the city of Atlanta and its rapid spread prompted worried law enforcement officials to call for new evacuations on Monday evening. 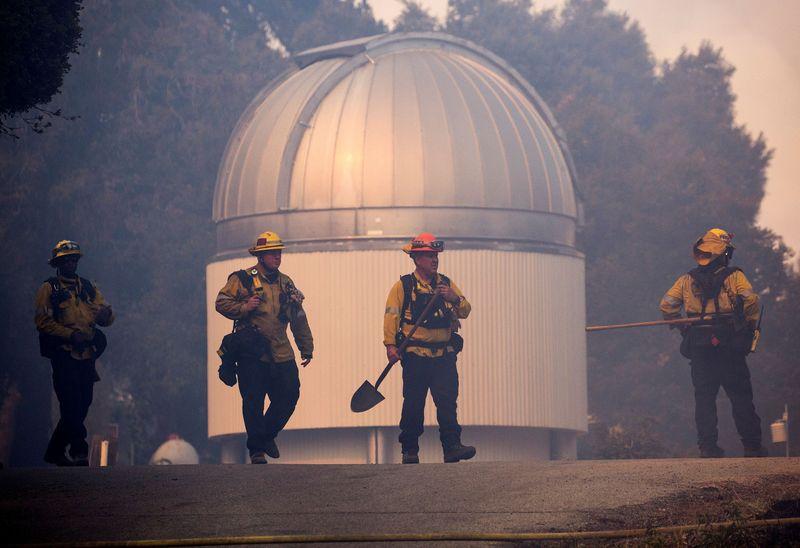 LOS ANGELES (Reuters) - Crews fought on Tuesday to defend homes and the famed Mount Wilson Observatory from California's biggest and most dangerous wildfire, standing their ground at a major highway between the flames and populated areas.

The Bobcat Fire, which broke out Sept. 6 in the Angeles National Forest north of Los Angeles, has already blackened an area larger than the city of Atlanta and its rapid spread prompted worried law enforcement officials to call for new evacuations on Monday evening.

Once home to the largest operational telescope in the world, the Mount Wilson Observatory, which sits on a peak of the San Gabriel mountains near vital communications towers, said in an update that almost all the forest around it had burned.

Firefighters overnight kept the Bobcat from breaching containment lines near the observatory and were preventively burning vegetation ahead of the fire along state Highway 2, which runs northeast from Los Angeles.

This summer California already has seen more land charred by wildfires than in any previous full year, with some 3.4 million acres burned since mid-August.

The fires, stoked by extreme weather conditions that some scientists call evidence of climate change, have destroyed some 6,100 homes and other structures and killed 26 people, three of them firefighters.

Another 2 million acres have burned in Oregon and Washington during an outbreak of wildfires, destroying more than 4,400 structures and claiming 10 lives. But rain showers across the western Cascade mountain range helped fire crews in the Pacific Northwest gain control of those conflagrations.

Although California has seen little rain in September, bouts of high temperatures and gale-force winds have given way in recent days to cooler weather, enabling firefighters to gain ground.

But forecasters predict rising temperatures, lower humidity and a return of strong, erratic winds around midweek in Southern California and by the weekend across the state's northern half, lending urgency to the firefight.

The Bobcat Fire has now scorched more than 109,000 acres to become one of the largest wildfires in recorded Los Angeles County history and was only 17% contained on Tuesday afternoon.

The flames came perilously close to the Mount Wilson Observatory last week before they were driven back by crews using air support.

Several more areas, including Pasadena, a city of 140,000 people, remained under evacuation warnings.

California's fire season historically has run through October. Five of the state's 20 largest blazes on record have occurred this year.