By Caroline Pailliez PARIS (Reuters) - Hundreds of workers at COVID-19 laboratories in France went on strike on Thursday, a trade union said, angry over poor working conditions as the coronavirus testing system buckles under huge demand. The hard-left CGT union said the strike was disrupting testing in some towns and could drag on if laboratory owners failed to deal with staff shortages and increase pay. The walkout comes as the government demands more and faster testing to fight a surge in new coronavirus cases. 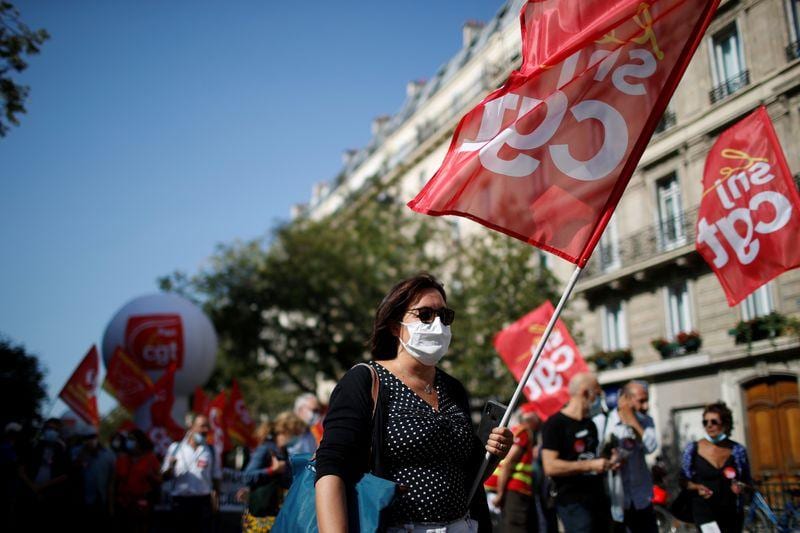 PARIS (Reuters) - Hundreds of workers at COVID-19 laboratories in France went on strike on Thursday, a trade union said, angry over poor working conditions as the coronavirus testing system buckles under huge demand.

The hard-left CGT union said the strike was disrupting testing in some towns and could drag on if laboratory owners failed to deal with staff shortages and increase pay.

The walkout comes as the government demands more and faster testing to fight a surge in new coronavirus cases.

"We're overwhelmed," laboratory nurse Aminata Diene, one of about 50 lab workers protesting outside a diagnostics centre on the edge of Paris said.

The 31-year-old said her Bioclinic laboratory in Bezons, which is staffed by four nurses and would normally handle 40 COVID-19 tests a day, was closed as a result of the strike.

"We can't be on the phone, physically greeting patients and carrying out tests all at once. We're exhausted, physically and mentally."

France has ramped up testing five-fold since the peak of the first wave and now carries out more than 1 million tests a week. But at some testing centres, people queue around the block and results can take days because of the bottleneck in laboratories.

Le Figaro reported that in a meeting with senior ministers last week, President Emmanuel Macron said: "One million tests is all well and good, but it's pointless if the results arrive too late."

The government published a decree on Wednesday paving the way for antigen tests that give a result within 20 minutes and could ease pressure on RT-PCR testing.

It advised the antigen tests would initially be used for hospital workers, care home staff and travellers at airports, a spokeswoman for the Paris regional health authority said.

Pascal Boudeau, a technician for 35 years at a medical laboratory outside Paris, said management needed to start listening after ignoring the calls for help for weeks.

"We're at our wits' end. We get verbally abused, sometimes physically. The pace is relentless," the CGT member said. "We've given up counting the overtime we do for free."

The lab workers strike coincided with street protests organised by the CGT and several smaller unions in numerous cities across France.

The CGT accuses Macron of destroying France's social security system, ruining public services and placing the interests of big business over those of workers even as the coronavirus wrecks the economy and forces job cuts.

The situation demanded "deep reform in a total break with the social and economic policies of the day," the unions said in a joint statement.

Macron's reforms to liberalise the economy and bolster French competitiveness have prompted waves of sometimes-violent protest during his three years in office.