By Alastair Macdonald and Gabriela Baczynska BRUSSELS (Reuters) - As British Prime Minister Theresa May prepares to face critics of her Brexit plan at her party conference at the weekend and her Labour opponents vow to vote against it in parliament, EU officials are increasingly uneasy about prospects for a deal. Michel Barnier, the European Union's chief Brexit negotiator, told senior EU lawmakers on Tuesday he had concerns about meeting his announced target of an outline deal next month and final package in mid-November to avoid Britain crashing out, a person familiar with the meeting told Reuters. 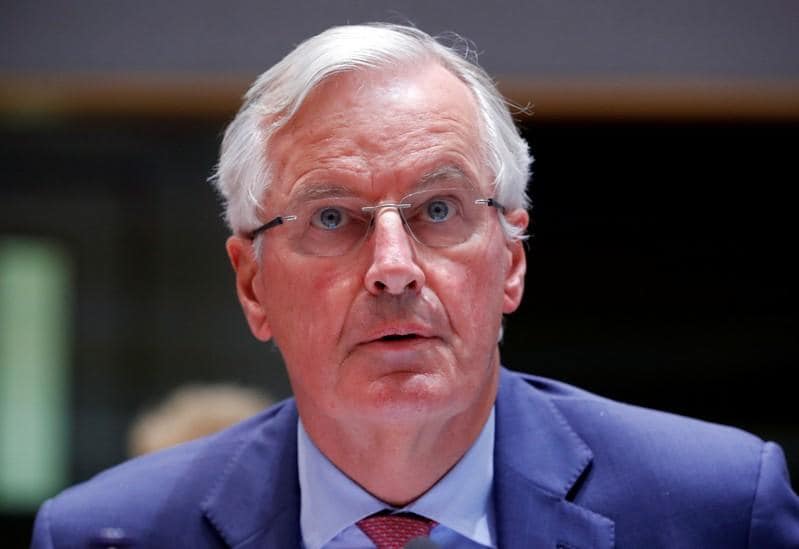 BRUSSELS (Reuters) - As British Prime Minister Theresa May prepares to face critics of her Brexit plan at her party conference at the weekend and her Labour opponents vow to vote against it in parliament, EU officials are increasingly uneasy about prospects for a deal.

Michel Barnier, the European Union's chief Brexit negotiator, told senior EU lawmakers on Tuesday he had concerns about meeting his announced target of an outline deal next month and final package in mid-November to avoid Britain crashing out, a person familiar with the meeting told Reuters.

To get there, EU leaders insist, May must make compromises.

Barnier himself tweeted on Wednesday that he was "working for an orderly Brexit" - Brussels-speak for averting a collapse of talks that could see Britain, and EU businesses and citizens, plunged into legal limbo on Brexit Day next March 29.

One diplomat involved in Brexit talks said his confidence that a deal was in the offing had started to recede. "I am less optimistic now," he said. "I'm not so sure any more."

And in a reminder that May's potential difficulties in securing a parliamentary majority for any deal she can strike with Brussels could trigger what the EU has labelled a "catastrophe", a senior official working for European Commission President Jean-Claude Juncker briefed ambassadors from the other 27 members on plans to deal with an abrupt British departure.

Diplomats and officials said Wednesday's discussions were a sign of determination to cope with a "hard Brexit" if Britain refuses to accept EU terms, but views were mixed on whether it signalled a greater degree of urgency or fears of a no-deal.

"There's a wish not to rock the boat with too much 'no deal' posturing," one EU diplomat said. "It's simply a calendar issue - if we want to be sure we’re prepared, we need to move forward."

EU leaders at a summit last week in Salzburg shot down a proposal May agreed with her cabinet at her Chequers residence in July, whereby British goods would be treated like EU produce inside the bloc without being bound by EU legislation on how they are made.

While EU negotiators had not expected May to compromise on that plan ahead of her Conservative Party conference starting on Sunday, her tough tone in defence of "Chequers" - despite sharp opposition to it within her own party - has worried the EU.

"She's still in her Chequers bunker," one senior EU official said. "She needs to shift -- but it's not clear that she can."

Labour leader Jeremy Corbyn, who will meet Barnier in Brussels on Thursday, said on the final day of his conference on Wednesday that the party would vote to block an EU deal based on Chequers. [nL8N1WC1TB]

Facing rebellion among Conservatives who say it binds Britain too much to EU rules, and opposition from those who want to keep even closer ties to the bloc or to stop Brexit, May's room for manoeuvre is limited, raising risks of an upset.

"There has been no progress for a while now in Brexit talks and the worry over a no-deal scenario is growing," said one EU diplomat involved in the negotiating process in Brussels.

"There is very little time left and I am not sure at all that a political agreement will emerge. Salzburg was meant to bring political positions closer, not to hype up rhetoric that seems to be ruling out chances for an agreement."

Watching the British political debate - including talk of a snap election or even a new Brexit referendum - another diplomat said there was growing unease in Brussels that May would be unable to get unpalatable compromises over Northern Ireland's borders and UK trade access to the EU through parliament.

"The EU side always tends to think the rational solution will eventually prevail," the diplomat said. "We may be underestimating the fervour looming in their parliament.

"They may well choose to go without a deal in the end."