BELFAST (Reuters) - British Prime Minister Boris Johnson and his Irish counterpart voiced optimism for a zero-tariff British-European Union trade deal after meeting in Northern Ireland on Thursday for their first talks since Micheál Martin took office. But Johnson later reiterated that Britain would not drop its rejection of level-playing-field commitments beyond those normally found in a free-trade agreement, a key sticking point. Britain, which formally left the EU at the end of January, is seeking to negotiate a new free trade accord by the end of 2020, when a transition period expires. 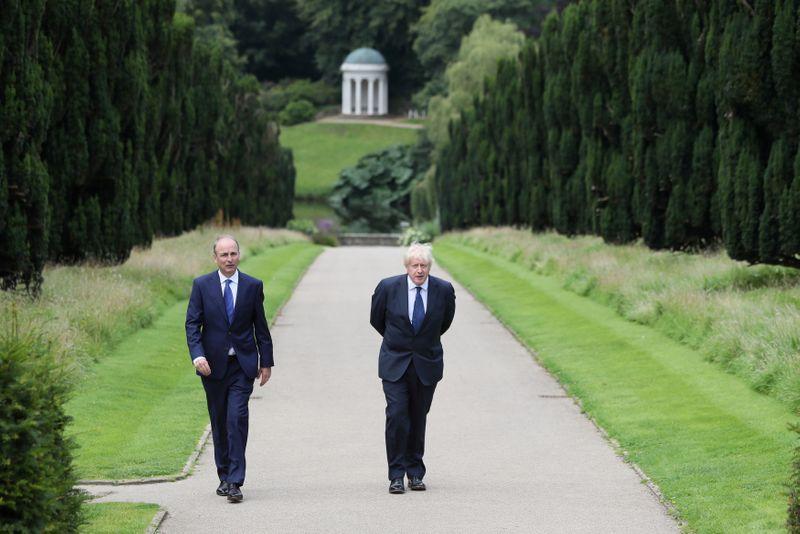 But Johnson later reiterated that Britain would not drop its rejection of level-playing-field commitments beyond those normally found in a free-trade agreement, a key sticking point.

Britain, which formally left the EU at the end of January, is seeking to negotiate a new free trade accord by the end of 2020, when a transition period expires.

Martin, who took over as Irish prime minister in June, said he believed agreement on a deal that was tariff and quota free was within grasp.

"There is a landing zone if that will is there on both sides, and I think it is," he said.

Johnson later said there was a "very, very good case for all our friends and partners around the EU to do what I think we all want to do, which is a zero tariffs, zero quota deal. It's there to be done. Let's just get on and do it".

On his first visit to Northern Ireland since the COVID-19 pandemic, Johnson sought to talk up the strength of the United Kingdom, which he described as "the most successful political partnership anywhere in the world."

His message echoed that made on a similar trip to Scotland, where polls show support for independence now outstrips that for remaining part of the United Kingdom.

Northern Ireland remains split on sectarian lines, with many Catholics favouring the creation of a united Ireland while pro-British Protestants favour the status quo. Three decades of bloodshed over the dispute largely ended with a 1998 peace deal.

Johnson also announced the establishment of two new bodies to work on marking the 2021 centenary of Northern Ireland's creation after the rest of the island split from Britain.

The region's Deputy First Minister Michelle O'Neill of Sinn Fein, which seeks a united Ireland, said she would resist any "one-sided biased approach from the British government".

Johnson said he would "to be sensitive to the point of view of all communities."

(Reporting by Padraic Halpin and Conor Humphries in Dublin, William James in London; Editing by Gareth Jones and Alexander Smith)