Britain's May says she will quit if her Brexit deal passes

By Guy Faulconbridge, Elizabeth Piper and Kylie MacLellan LONDON (Reuters) - British Prime Minister Theresa May said on Wednesday she would quit if her twice-defeated EU divorce deal passes at the third attempt, making a last-ditch bid to persuade rebels in her Conservative party to back her. May told a meeting of Conservative lawmakers she would stand down if her divorce plan finally got through a bitterly-divided parliament, to ensure a smooth path for a new leader to begin the next step of negotiating the future relationship with the European Union. 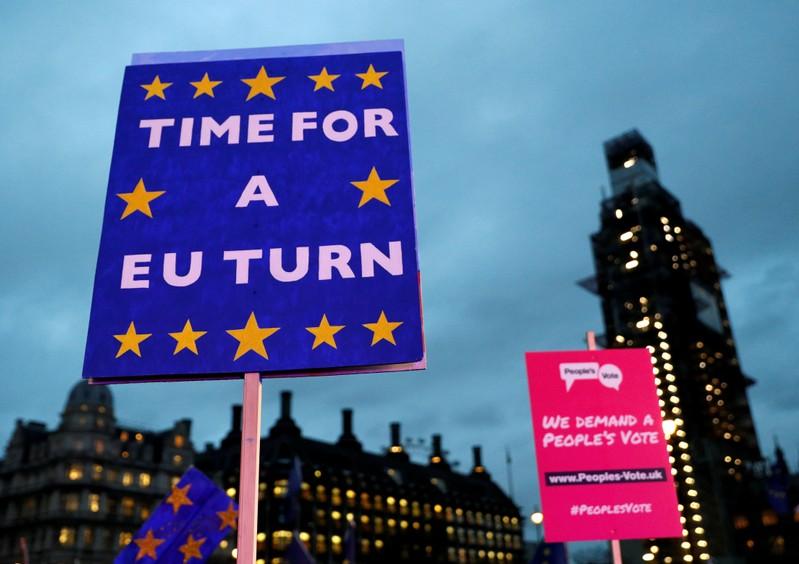 LONDON (Reuters) - British Prime Minister Theresa May said on Wednesday she would quit if her twice-defeated EU divorce deal passes at the third attempt, making a last-ditch bid to persuade rebels in her Conservative party to back her.

May told a meeting of Conservative lawmakers she would stand down if her divorce plan finally got through a bitterly-divided parliament, to ensure a smooth path for a new leader to begin the next step of negotiating the future relationship with the European Union.

"I have heard very clearly the mood of the parliamentary party," May said. "I know there is a desire for a new approach – and new leadership – in the second phase of the Brexit negotiations – and I won't stand in the way of that."

May's announcement is the latest dramatic turn in the United Kingdom's three-year Brexit crisis, but it is still remains uncertain how, when or even if it will leave the European Union.

Many of the Conservative rebels who want a cleaner break from the EU than May's deal would deliver had made it clear that they would only consider supporting her agreement if she gave a firm commitment and date for her resignation.

May, a vicar's daughter, had already promised to step down before the next election, due in 2022. By agreeing to go sooner, she increases the chances of her EU deal passing before the new April 12 deadline.

"I am prepared to leave this job earlier than I intended in order to do what is right for our country and our party," May told the party meeting, according to extracts released by her office.

"I ask everyone in this room to back the deal so we can complete our historic duty - to deliver on the decision of the British people and leave the European Union with a smooth and orderly exit."

The government is now expected to bring the deal back to parliament for a third vote on Friday.

"It was inevitable and I just feel she's made the right decision. She has actually read the mood of the party, which was a surprise," said Conservative lawmaker Pauline Latham.

But it requires some EU rules to apply unless ways can be found in the future to ensure no border is rebuilt between British-ruled Northern Ireland and EU member Ireland.

Many Conservative rebels have objected to this so-called Irish backstop, saying it risks binding Britain to the EU for years. But given the choice between the backstop and no Brexit at all, more should come round.

Some of the party's most influential dissenters had already indicated they would back her deal, agreed after two years of talks with the EU, saying it was the least worst option.

While May was telling her lawmakers of her intention to quit in a parliament committee room, MPs in the main chamber debated eight Brexit options ranging from leaving abruptly with no deal to revoking the divorce papers or holding a new referendum.

Several options on the table would see much closer alignments with the EU than May has been willing to consider, including staying in the common market or a customs union. They will vote at 1900 GMT on a ballot paper for as many proposals as they wish. Results will be announced after 2100 GMT.

The United Kingdom was originally due to leave the EU on March 29 but last week the EU granted an extension to the divorce date until April 12.