LONDON (Reuters) - A sharp deterioration in turnaround times and availability of COVID-19 tests in Britain saw the government admit there were challenges to its testing regime that it says has been swamped by demand amid a spike in cases. 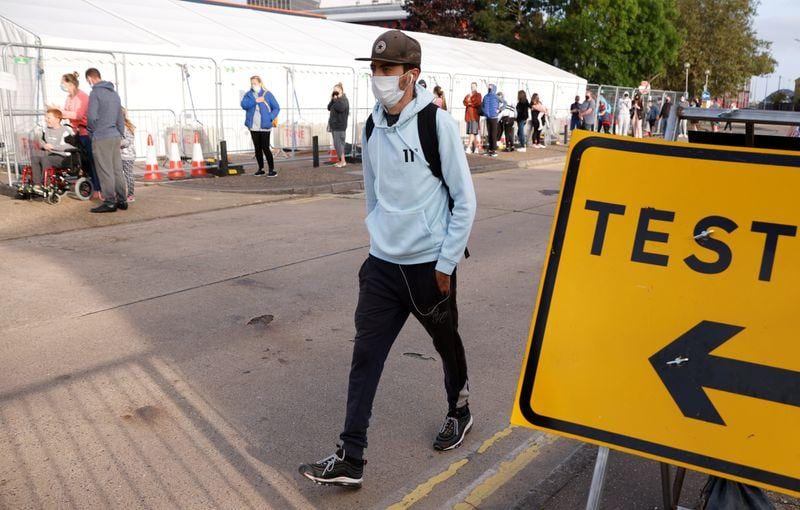 LONDON (Reuters) - A sharp deterioration in turnaround times and availability of COVID-19 tests in Britain saw the government admit there were challenges to its testing regime that it says has been swamped by demand amid a spike in cases.

Only 14% of coronavirus test results in England came back within 24 hours last week, a sharp fall from the week before, according to data on Thursday that adds to pressure on a government fending off criticism that its strategy is collapsing.

The British government has been under intense pressure over the buckling of its promised "world-beating" system to test and trace coronavirus cases, meant to protect the country from a second wave of infection as schools reopened this month.

"There's a challenge in testing," UK health minister Matt Hancock said, adding that capacity for testing was growing. "The challenge is that demand has gone up faster."

Prime Minister Boris Johnson acknowledged on Wednesday that there was not enough testing capacity, and said that he is aiming for the capacity to do 500,000 daily tests by the end of October.

Ministers have acknowledged that families are unable to get tests or being offered them only at remote locations. The new data, revealed on Thursday, showed that the arrival of test results has also sharply slowed.

Only 14.3% of test results from all sites were received within 24 hours, compared to 32% the previous week.

For tests taken in person at sites around England, rather than on samples collected off-site, only a third were returned within 24 hours, compared to two-thirds in the previous week.

Hancock appeared to blame people asking for tests without a good reason for swamping the system.

"It's that huge spike in demand that is the challenge."

But cases are sharply increasing too.

The NHS Test and Trace scheme said there had been a 167% increase in the number of new people testing positive for COVID-19 in England since the end of August.

The Test and Trace scheme reported that said positive cases had been rising since the start of July and are now double the number recorded when the system was launched in May.

"It has become not so much Test and Trace, more like trace a test," Labour health spokesman Jonathan Ashworth said in parliament.

"Rather than fixing testing, (Hancock) is restricting testing."

There were 3,991 new cases of COVID-19 reported on Wednesday, the highest daily number since May, with 221,192 tests processed in the latest daily figures.