By William James BIRMINGHAM, England (Reuters) - Britain's anti-European Union UK Independence Party (UKIP) launched a set of populist policies on Friday hoping to revive their dwindling political influence and capitalise on outrage over the government's handling of Brexit. Prime Minister Theresa May is struggling to sell her plan for a Brexit that would continue to see Britain abide by many EU rules. Growing unrest among pro-Brexit groups could scupper her leadership and thrust Britain into political crisis. 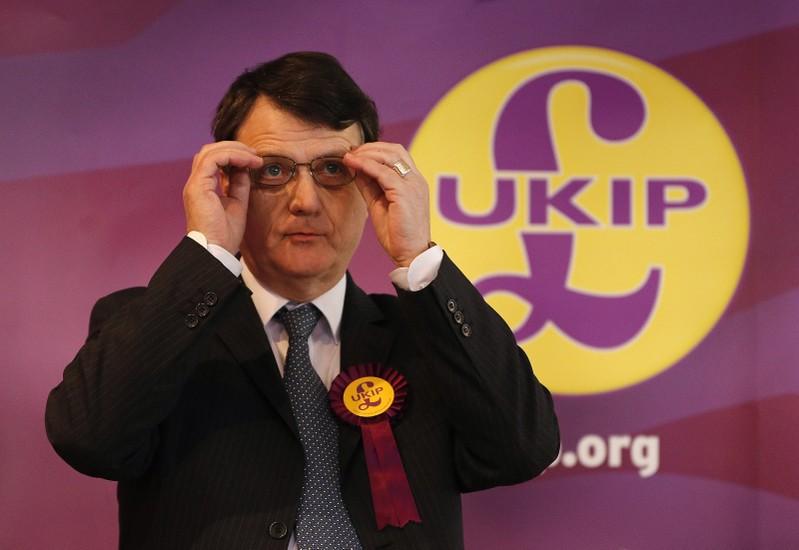 Prime Minister Theresa May is struggling to sell her plan for a Brexit that would continue to see Britain abide by many EU rules. Growing unrest among pro-Brexit groups could scupper her leadership and thrust Britain into political crisis.

UKIP played a defining role in recent British history as the force that pressured former Conservative Prime Minister David Cameron to call a referendum on leaving the EU, and then stoked the anti-establishment uprising behind the 2016 'leave' vote.

But, since finding itself on the winning side of the Brexit vote UKIP has struggled to influence the exit process, seeing its voter support evaporate and undergoing two years of inner turmoil to find a leader to replace the talismanic Nigel Farage.

On Friday, current leader Gerard Batten published a manifesto document that sought to rediscover the everyman appeal that once made the party a threat to larger rivals from across the British political spectrum.

"These policies are aimed at helping the people who form the backbone of Britain: ordinary workers and taxpayers, the unemployed who would like to work, and small and medium-sized business owners," Batten, a member of the European Parliament, said in a statement launching the 17-page manifesto.

"Its purpose is to make UKIP a populist party in the real meaning of the word - one whose policies are popular with voters."

The policies included a "complete and total" withdrawal from the EU, arguing that Britain should end all payments to the EU and adherence to the bloc's rules - a much more radical break than May is proposing.

Batten has been criticised, including by some former UKIP members, for engaging with causes championed by far-right groups, and he has described Islam as a "death cult".

Other policies, much of which are similar to previous UKIP positions, include selective and limited immigration, scrapping overseas aid, lower domestic taxes and a tougher approach to taxing multinational companies.

UKIP currently has no elected representatives in parliament and it gathered only 600,000 votes in a 2017 general election, compared to 3.8 million in 2015 - a fall from more than 12 percent of the total vote to less than 2 percent.

Nevertheless, in many marginal seats it has the power to influence which major party can win and, with no party clearly ahead in opinion polls, has the potential to affect the outcome of any future national election. Although an election is not scheduled until 2022, May's government remains fragile.