By Guy Faulconbridge LONDON (Reuters) - British Foreign Secretary Jeremy Hunt said on Friday that two Reuters journalists jailed in Myanmar on charges of breaking the country's Official Secrets Act were innocent and that Britain had serious concerns about due process in the case. 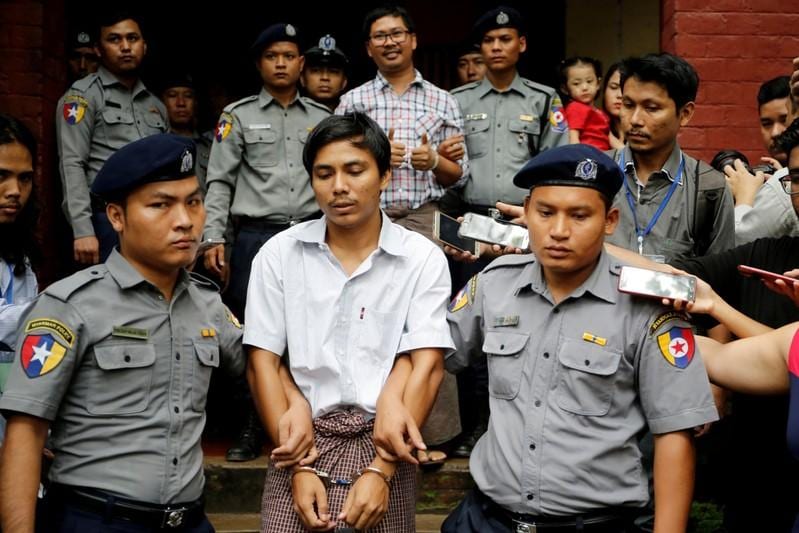 LONDON (Reuters) - British Foreign Secretary Jeremy Hunt said on Friday that two Reuters journalists jailed in Myanmar on charges of breaking the country's Official Secrets Act were innocent and that Britain had serious concerns about due process in the case.

Wa Lone and Kyaw Soe Oo were found guilty in September after a trial at a Yangon district court in a case that has raised questions about Myanmar's progress towards democracy and triggered an outcry from diplomats and human rights advocates.

Myanmar leader Aung San Suu Kyi said in September that the jailing of the reporters had nothing to do with freedom of expression. She said they were not jailed because they were journalists.

In a sign of the level of concern among world powers about the case, Britain's foreign policy chief took the unusual step of recording a short video to show his support for the jailed Reuters journalists.

"We want the world to remember these two journalists, not just because we believe they are innocent, but also because this is a year when we have seen a big increase in the number of journalists who have been locked up and indeed far worse - murdered," Hunt said.

There were 251 journalists jailed for doing their jobs as of Dec. 1, the Committee to Protect Journalists said in an annual study earlier this month.

At least 53 journalists were killed around the world between January 1 and December 14, 2018, according to the CPJ, a U.S.-based nonprofit that promotes press freedom.

Britain's Hunt said that at a time when people were looking forward to spending time with their families, it was time to reflect on the fate of the two Reuters journalists.

They "are both in prison this Christmas because they wanted to report of the Rakhine crisis where there has been some alleged genocide against the Rohingya people in Burma," Hunt said.

The Reuters reporters, who pleaded not guilty, said they were handed papers by police shortly before they were detained, and a police witness testified that they had been set up.

They had been investigating the killing of 10 Rohingya men and boys as part of a military response to insurgent attacks.

"We are very worried about due process in this case - it is something that I have raised with Aung San Suu Kyi," said Hunt. He did not elaborate further on the British concerns about the case.

Lawyers for the two Reuters reporters have lodged an appeal against their conviction and sentence.