Brief scuffles at Guatemala-Mexico border as migrants try to cross 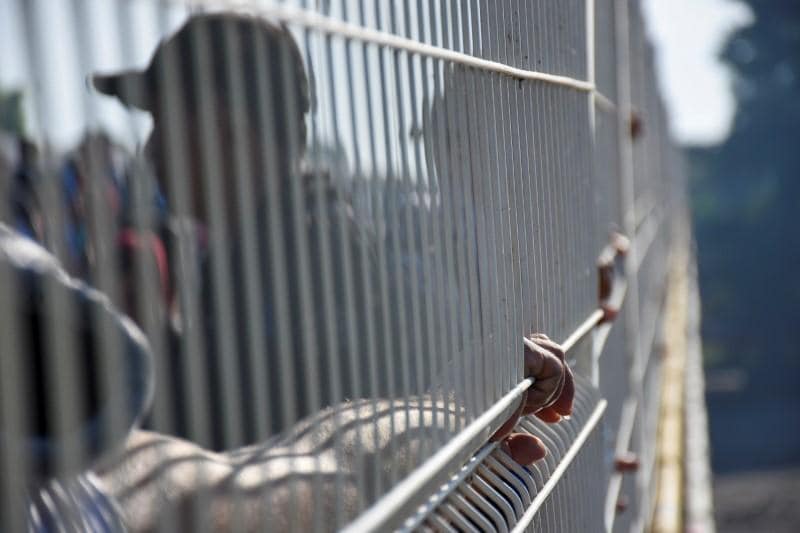 TECUN UMAN, Guatemala (Reuters) - Scuffles briefly broke out on the Guatemala-Mexico border on Saturday morning as a group of several hundred mostly Honduran migrants pressed forward to cross, only to be pushed back by Mexican security forces.

Scores of people who entered Guatemala from Honduras in recent days have been arriving at the Mexican border, with the bulk of them still advancing in a larger caravan, testing the resolve of Mexico to heed U.S. demands to contain migrant flows.

President Donald Trump has threatened to hurt Mexico and Central American countries economically if they allow large groups to reach the U.S. border, and the latest exodus from Honduras has been accompanied by U.S. border agents.

Guatemalan authorities say around 4,000 people have arrived in the country in the last few days, the biggest surge since Guatemala, Honduras and El Salvador signed accords with the United States that increase pressure on them to deal with migrants.

After waiting on a bridge at the Guatemalan border town of Tecun Uman, some migrants began pushing and shoving before being driven back by Mexican security officials, who shut the border crossing and sought to calm the group.

A Reuters witness estimated there were 300-400 people on the Guatemalan side of the border. Along with local television reporters, he said order was quickly restored at the scene.

A few migrants made it through the gate, local media said, but Mexican officials appeared to be controlling the situation more successfully than when a large caravan sought to force its way through at the same crossing in October 2018.

Mexican President Andres Manuel Lopez Obrador said he is monitoring the approach of the migrants and has held out the prospect of jobs in southern Mexico for those who want to stay.

Interior Minister Olga Sanchez said earlier this week that the migrants would not be granted safe conduct passes.

About 400 of the migrants who entered Guatemala since Wednesday have been returned to their countries of origin, according to a statement issued by the Guatemalan government.