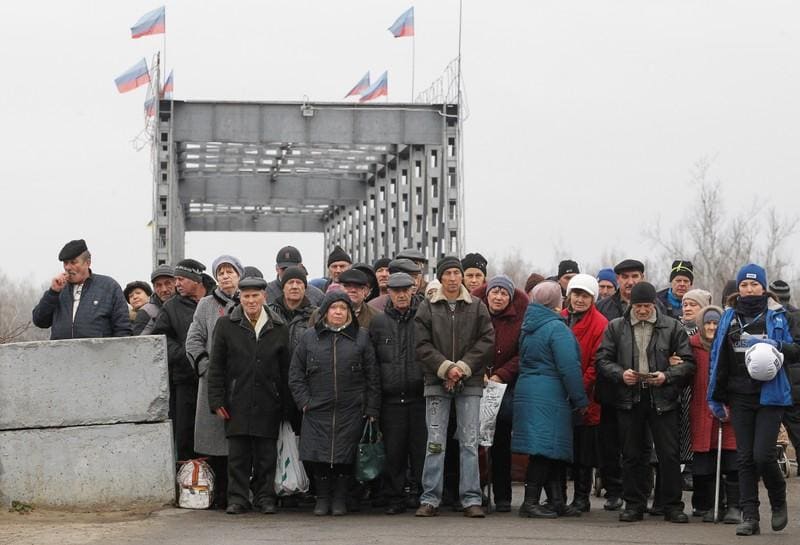 STANYTSIA LUHANSKA, Ukraine (Reuters) - President Volodymyr Zelenskiy on Wednesday unveiled a rebuilt bridge that was blown up in eastern Ukraine in 2015, among several confidence-building measures before a summit next month meant to end a conflict with Russian-backed separatist forces.

Dressed in a khaki jacket, Zelenskiy was visiting the town of Stanytsia Luhanska, one of five checkpoints where civilians can pass between territory controlled by Ukraine on one side of the Siversky Donets river and Moscow-backed rebels on the other.

The bridge over the river was blown up in March 2015. Both sides accused the other of destroying it. The road over the restored bridge is wide enough for an ambulance to pass through but not a tank, Zelenskiy said.

The area was also where both sides in June began the first of three withdrawals of troops and weapons in a conflict that has killed over 13,000 people in more than five years and poisoned relations between Ukraine and Russia, Kiev's former Soviet master.

The leaders of Ukraine, Russia, Germany and France will meet in Paris next month for the first time in more than three years.

Zelenskiy said he wants the summit to establish a timeline for the return of Ukrainian territory and people from Russia, and an end to "fake" ceasefires that last two or three days before the shooting starts again.

Zelenskiy wants a ceasefire that is "serious - where there is no shooting, that's the way I understand it. Also with clear terms, responsibilities," he told reporters.

"I say responsibilities, because so far in Minsk and at many meetings no one has said what will happen if we agree on a ceasefire and the shooting starts again."

A ceasefire was signed in the Belarus capital Minsk in 2015 but is regularly flouted.

As Zelenskiy spoke, Russian flags were mounted on the other side of the bridge controlled by the separatists.

"It all looks nice," Zelenskiy said. "It's just that the wrong flags are hanging there. But it's ok, the day will come when we remove them."

Ukraine says that after Russia annexed Crimea in 2014, Moscow engineered quasi-separatist uprisings across a belt of eastern Ukraine that escalated into a full-scale conflict, something Moscow denies.

Two so-called People's Republics, unrecognized by either Kiev or Moscow, have formed in parts of the Donetsk and Luhansk industrial regions of eastern Ukraine, known as Donbass.

Speaking at the bridge on the other side, senior separatist leader Vladislav Deinego accused Ukraine of first destroying the bridge and then sabotaging efforts to repair it.

He said "a reasonable approach has triumphed," according to remarks released by the separatists' news website.