BRASILIA (Reuters) - Thousands of people representing the more than 300 tribes native to Brazil marched to government offices in Brasilia on Friday to protest the policies of right-wing President Jair Bolsonaro that threaten their reservation lands. 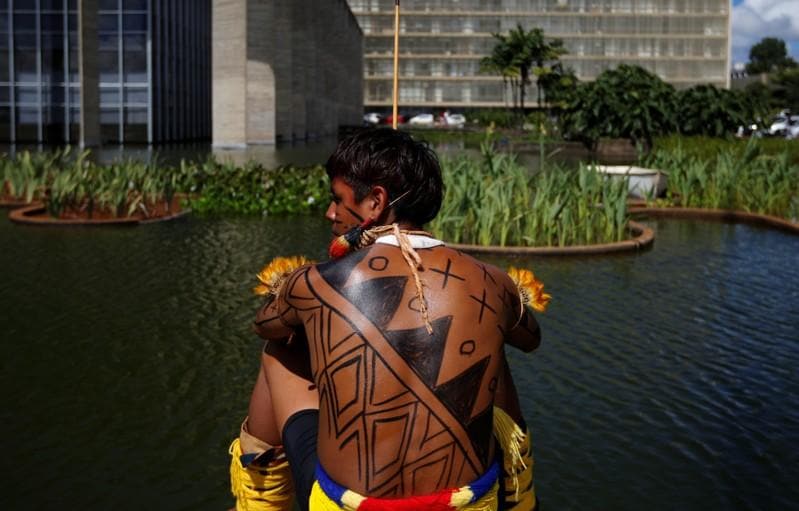 BRASILIA (Reuters) - Thousands of people representing the more than 300 tribes native to Brazil marched to government offices in Brasilia on Friday to protest the policies of right-wing President Jair Bolsonaro that threaten their reservation lands.

Wearing body paint and headdresses made with the colourful feathers of Amazon birds, they brandished bows and arrows and beat drums while chanting resistance songs. The march comes at the end of a three-day rally in the Brazilian capital called the Free Land Encampment.

"Our families are in danger, our children are under threat, our people are being attacked. In the name of what they call economic progress they want to kill our people," said David Karai Popygua, an ethnic Guarani Mbya from the state of Sao Paulo.

Bolsonaro, a former army captain turned politician, was elected in October with the support of Brazil's farm sector that has pushed for access to more land and fewer environmental controls. They also want him to ease gun possession laws.

One of his first measures on taking office on Jan. 1 was to dismantle the indigenous affairs agency FUNAI, handing reservation demarcation decisions to the Agriculture Ministry that is controlled by farming interests.

"It is an embarrassment for our country to have a government that does not understand the struggle of indigenous peoples and has no knowledge at all of the indigenous population," said Daran, a Tupi Guarani chieftain.

Brazil has more than 850,000 indigenous people that make up less than 1 percent of its population. They live on reservations that make up about 13 percent of the country's territory.

Bolsonaro has said that is too much land for so few people and has vowed to review some reservation borders. He says they live poorly and wants to assimilate them by allowing large-scale farming and commercial mining on reservations.

The government did not immediately comment on the protests.

The country's Supreme Court on Thursday denied an injunction sought by the Brazilian Socialist Party to stop the transfer of indigenous land decisions to the agriculture ministry. Hundreds of tribal people protested outside the building.

Sonia Guajajara, national coordinator of Brazil's Association of Indigenous Peoples, told Reuters that land invasions and other attacks on tribes by illegal miners and loggers had increased since Bolsonaro took office.

"They say that they have been authorized to occupy indigenous land," she said. "We are here to oppose mining, hydroelectric and agribusiness companies that destroy tribal communities and Mother Nature."

"We have resisted for five centuries and we are not going to surrender in four years. We will continue fighting," she said.