By Anthony Boadle BRASILIA (Reuters) - Brazil's President Jair Bolsonaro told the United Nations on Tuesday that indigenous people in the Amazon were to blame for fires in the rainforest this year and attacked the media for spreading panic about the coronavirus pandemic. In a pre-recorded speech to a remote session opening the U.N 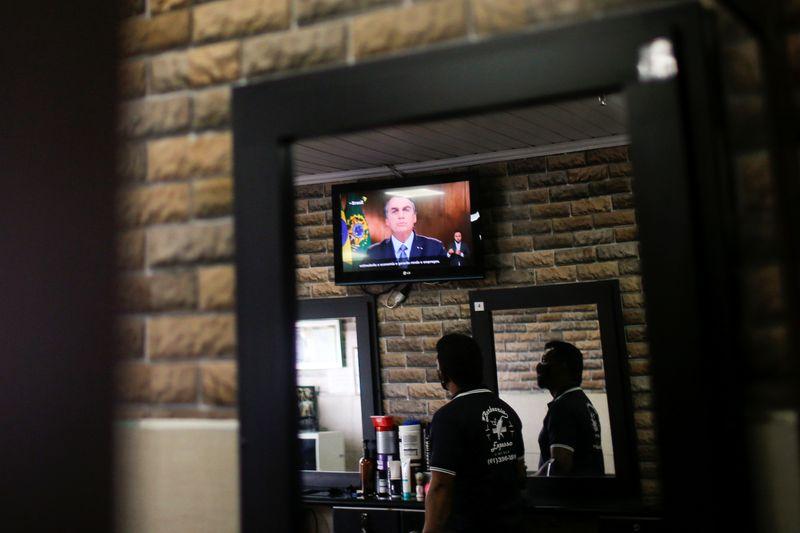 BRASILIA (Reuters) - Brazil's President Jair Bolsonaro told the United Nations on Tuesday that indigenous people in the Amazon were to blame for fires in the rainforest this year and attacked the media for spreading panic about the coronavirus pandemic.

In a pre-recorded speech to a remote session opening the U.N. General Assembly, the far-right leader rebutted international criticism of his environmental policies and his handling of the world's second-most deadly coronavirus outbreak after the United States.

He said the rainforest's humidity prevents fire spreading, countering experts who say ranchers use fire to clear newly deforested land for pasture, which in dry years can burn into woodland.

"The fires practically occur in the same places, on the east side of the forest, where peasants and Indians burn their fields in already deforested areas," Bolsonaro said.

Sonia Guajajara, head of Brazil's main indigenous umbrella organization, said Bolsonaro was lying to the world. "We must denounce this political catastrophe that destroys the environment and our future," she said.

Bolsonaro, who has repeatedly downplayed the gravity of the coronavirus, lamented the more than 137,200 COVID-19 deaths in Brazil.

But he accused the media of "politicizing" the pandemic and causing panic among Brazilians by telling them to stay home, which he said almost led to "social chaos" while his government "boldly" took emergency economic measures to protect jobs and incomes.

The Amazon rainforest is experiencing its worst rash of fires in 10 years, and the Pantanal wetlands, the world's largest, has the most blazes ever recorded.

The president said Brazilian agriculture feeds one billion people in the world, and that the country has the best environmental legislation.

"And yet we are the victims of one of the most brutal campaign of misinformation about the Amazon and the Pantanal," he said, without specifying what information was false.

Bolsonaro said it was difficult for Brazil to fight the Amazon fires and illegal logging in an area bigger than Western Europe, but was trying to do so with the help of the military.

His government has said criticism of its environmental policies are just a cover for protectionism in Europe, where farmers see Brazil as a competitor and businesses have threatened to boycott Brazilian products.

Bolsonaro said his government is still committed to concluding a free trade agreement between the European Union and the South American trade bloc Mercosur.