Brazilian tribes back manifesto to save Amazon habitat from Bolsonaro

By Ricardo Moraes XINGU INDIGENOUS PARK, Brazil (Reuters) - Leaders of native tribes in Brazil issued a rallying call to protect the Amazon rainforest and its indigenous people from what they called the 'genocide, ethnocide and ecocide' planned by the country's far-right President Jair Bolsonaro. 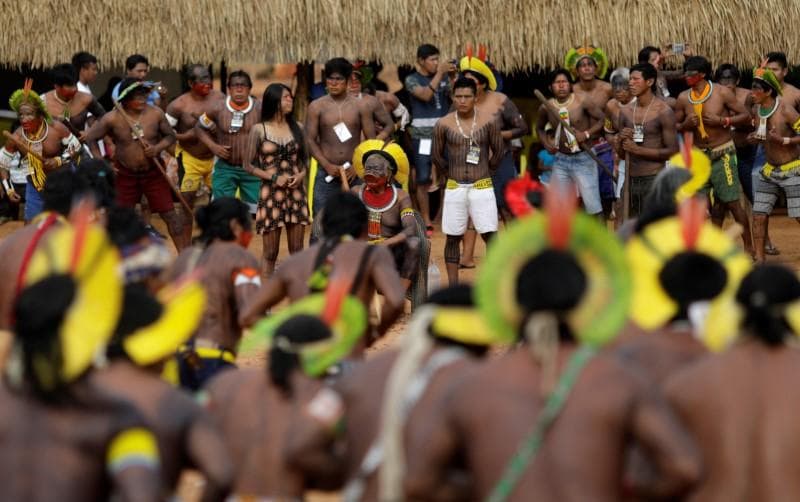 XINGU INDIGENOUS PARK, Brazil (Reuters) - Leaders of native tribes in Brazil issued a rallying call to protect the Amazon rainforest and its indigenous people from what they called the "genocide, ethnocide and ecocide" planned by the country's far-right President Jair Bolsonaro.

A manifesto signed on Friday at the end of a four-day meeting in the Xingu reservation said Bolsonaro was threatening the survival of indigenous people with plans to allow commercial mining and ranching on their protected lands.

"The government is attacking us and wants to grab our lands," the document said, calling for a year of demonstrations and the support of foreign organizations and environmental activists.

Bolsonaro has vowed to encourage economic development in the Amazon to lift the tribes from poverty and improve the lives of 30 million Brazilians who live there. Environmentalists fear his plans will speed up destruction of the rainforest, which is a bulwark against global climate change.

"We do not accept mining, agribusiness and the renting of our lands, nor logging, illegal fishing, hydroelectric dams or other projects that will impact us directly and irreversibly," the four-page document said.

The meeting in the village of Piaraçu on the Xingu river was called by Raoni Metuktire, the 90-year-old Kayapó chief who became an environmental campaigner in the 1980s with British rock singer Sting at his side.

The tribes said the Brazilian state under Bolsonaro had failed to fulfill its constitutional duty to protect indigenous lands and the surrounding environment by stopping illegal activity and punishing invaders.

They also held the government responsible for the poisoning of the "air, soil and rivers" by the uncontrolled use of chemicals in agriculture adjacent to their reservations.

"We were convened by Chief Raoni with the goal of coming together and denouncing that a political project by the Brazilian government of genocide, ethnocide and ecocide is underway," the manifesto said.

Bolsonaro's office did not immediately respond to a request for comment.

Brazil’s indigenous affairs agency, Funai, run by a police officer appointed by Bolsonaro, said earlier this week that the meeting in the Xingu was a “totally private event” that it could not support because it was not “in line” with government policy.

The farm frontier in Brazil, one of the world's top meat and grains exporters, has advanced into the Amazon region in recent years, causing land conflicts with indigenous people.

Invasions of reservations by illegal loggers and miners have increased since Bolsonaro took office last year, leading to violent clashes. At least eight indigenous leaders were killed last year in circumstances that have not yet been clarified.