By Jake Spring and Sergio Queiroz BRASILIA/RIO DE JANEIRO (Reuters) - Thousands of Brazilians demanded action on climate change on Friday, taking aim in nationwide protests at President Jair Bolsonaro who they say is allowing fires to destroy the Amazon rainforest, worsening the environmental crisis. Global anxiety that not enough is being done on climate change has focussed on Brazil since August when it was revealed that fires in the Amazon have surged to their highest level since 2010. Environmentalists blame right-wing Bolsonaro's policies favouring development over environmental protections for that and rising deforestation. 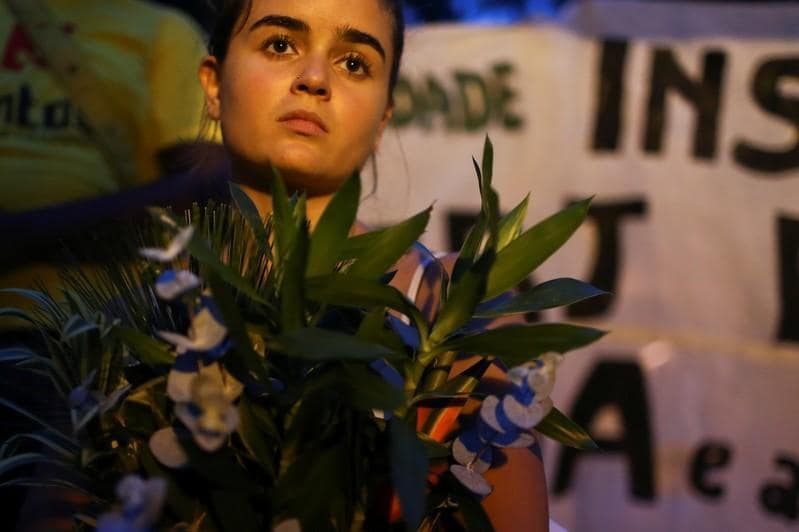 By Jake Spring and Sergio Queiroz

Global anxiety that not enough is being done on climate change has focussed on Brazil since August when it was revealed that fires in the Amazon have surged to their highest level since 2010.

"The policy of the Bolsonaro government is the policy of environmental destruction and deepening the climate crisis ... this is why we're on strike," said Marcela Pimentel Miranda, an organizer for Youth for Climate's affiliate in Brasilia, which is helping to organise the protests.

Salles told Reuters on Thursday that the majority of the Amazon remains intact, showing that Brazil is doing an "excellent job" to preserve the environment. On Friday, Bolsonaro authorized the military to continue firefighting efforts in the Amazon for another month.

The Amazon is the world's largest tropical rainforest, 60% of which lies in Brazil, and absorbs vast amount of greenhouse gases.

Salles acknowledged the existence of man-made climate change and said protesters are right to be concerned about the future.

"I have children and I am concerned about their future too," he said in an interview.

The demonstrations in major Brazilian cities are among thousands of protests in a global "climate strike" ahead of next week's U.N. Climate Action Summit and New York Climate Week, where political, business and civil society leaders will gather to discuss the issue.

"I am going to New York to show the world that Bolsonaro's policies do not represent Brazil, there are other views," congresswoman Tabata Amaral, 25, a member of a new generation of Brazilian politicians, said by telephone.

Small protests in the morning gave way to major demonstrations with hundreds gathering in Rio and Brasilia, while more than two thousand amassed in downtown Sao Paulo.

"For us to have a livable planet and future, air to breath, food and water, we need to solve this problem now," said Julia Waddington, one of the protesters.