By Jamie McGeever and Marcela Ayres BRASILIA (Reuters) - Brazilian President Jair Bolsonaro delivered his proposed pension overhaul to Congress on Wednesday, a plan to save over 1 trillion reais ($270 billion) in a decade, which raised doubts about whether lawmakers would pass a package of that scale. 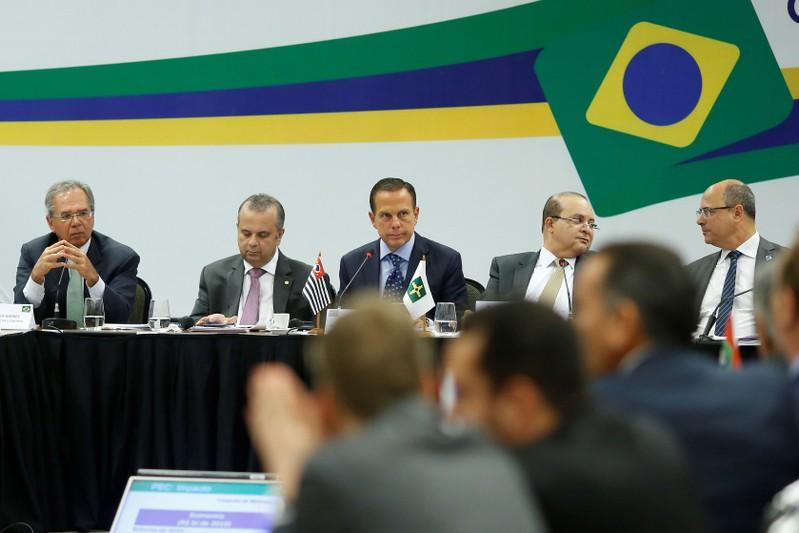 BRASILIA (Reuters) - Brazilian President Jair Bolsonaro delivered his proposed pension overhaul to Congress on Wednesday, a plan to save over 1 trillion reais ($270 billion) in a decade, which raised doubts about whether lawmakers would pass a package of that scale.

The social security bill is the cornerstone of the new president's effort to close what most economists call an unsustainable public deficit and boost a weak economic recovery.

The government pledged to present changes soon for military pensions that would increase the savings, a delay that also raised a red flag among some legislators.

"A reform plan that does not include the military will not move ahead in Congress," Senator Ciro Nogueira, head of the centre-right Progressive Party, told reporters.

Bolsonaro's savings target of 1.072 trillion reais in a decade is more ambitious than the roughly 600 billion reais of savings proposed by his predecessor Michel Temer, who gave up on the idea amid public backlash and graft scandals.

Brazilian market reaction to the proposal was mixed throughout the day, with the stock market and the real eventually closing lower. Financial analysts and investors mostly welcomed the proposals, but few expected swift approval.

"One thing is a solid, well thought out and crafted reform proposal, the other is what will ultimately emanate from Congress. The risk is that the initial proposal will be significantly watered down by Congress," wrote Alberto Ramos, head of Latin American economic research at Goldman Sachs.

Bolsonaro's opponents on the left slammed the plan saying it would hurt poor Brazilians. Even some of the president's allies questioned the delay on military pensions.

Final approval is unlikely until the fourth quarter, Ramos told clients in a note, far later than the government's target of June or sooner. Rogerio Marinho, the Economy Ministry's secretary of social security and labour, also told reporters approval could be in the second half of the year.

Bolsonaro's stumbles in other matters ahead of the pension reform rollout raised questions about his ability to pull off the ambitious legislative effort.

On Tuesday evening, the lower chamber voted overwhelmingly to overturn an executive order on state secrets. It was Bolsonaro's first legislative defeat, underscoring the resistance he faces in a fragmented Congress.

On Monday, Bolsonaro fired one of his most senior aides and principal negotiators with Congress, Secretary General Gustavo Bebianno, amid a scandal involving campaign financing for some of his party's congressional candidates.

"The big risk is the presidential palace's lack of appetite for political dealmaking. I am waiting to see how the opposition takes advantage of the government's weakness," said Jose Francisco de Lima Goncalves, chief economist at Banco Fator.

Under Bolsonaro's pension proposal, wealthier taxpayers would contribute more while the minimum retirement ages would rise to 62 for women and 65 for men and new individual savings accounts would give workers "an alternative to the current system," according to a presentation by the economy minister.

The transition to the new rules would take 12 to 14 years, depending on which transition option individuals choose.

Changes to military pensions, which the government vowed to propose within 30 days, would increase total savings over 10 years to 1.165 trillion reais. Pensions for military police and firefighters would follow the same rules as the armed forces.

Bolsonaro, a former army captain and congressman who got his start in politics advocating better compensation for troops and police, told lawmakers he had overcome his previous resistance to pension reform and hoped they would too.