PARIS (Reuters) - A Paris court gave a year-long firm jail sentence on Wednesday to a former French boxing champion who was filmed raining blows on riot officers during a 'yellow vest' protest last month. Christophe Dettinger, 37, was also given an 18-month suspended sentence in addition to jail time for the assault on police blocking protesters on a bridge over the river Seine 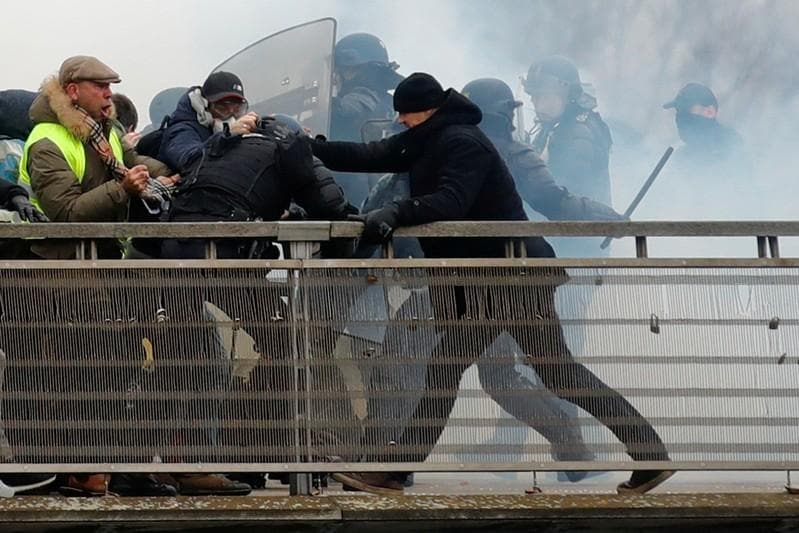 Christophe Dettinger, 37, was also given an 18-month suspended sentence in addition to jail time for the assault on police blocking protesters on a bridge over the river Seine.

Some among the protesters hailed Dettinger as a hero for the incident that has come to symbolise the violent nature of the protests against President Emmanuel Macron's government.

The twice national light-heavyweight champion said during the hearing that he was ashamed and had committed a "mistake" out of anger at police "beating" protesters.

A website set up to raise funds for Dettinger received pledges of more than 114,000 euros ($128,409) to help him before the platform closed the page after he turned himself in several days after the incident.

Dettinger was caught on camera jumping over the railings of a pedestrian bridge blocked by baton-wielding police before swinging blows at two officers, forcing them to retreat.

One was floored briefly, where Dettinger was seen kicking out at him, but the policeman managed to get up and retreat. Punches also connected with an officer's head, footage showed.

Nicknamed the "Gypsy of Massy" after his hometown near Paris, the 1.92m (6ft 4in) tall boxer was taking part in an eighth Saturday of anti-government protests that have undermined Macron's authority.