RIO DE JANEIRO (Reuters) - Support for Brazilian President Jair Bolsonaro, who has overseen the world's second deadliest coronavirus outbreak, has fallen sharply, a Datafolha poll shows, as a brutal second wave and a lack of vaccines sour views of his far-right government. 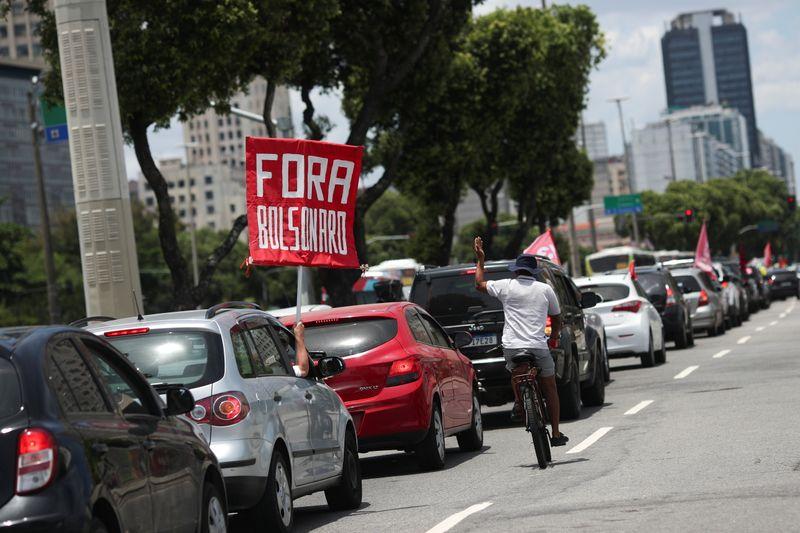 RIO DE JANEIRO (Reuters) - Support for Brazilian President Jair Bolsonaro, who has overseen the world's second deadliest coronavirus outbreak, has fallen sharply, a Datafolha poll shows, as a brutal second wave and a lack of vaccines sour views of his far-right government.

However, despite his declining support, a majority of Brazilians are now against him being impeached, a second Datafolha poll found. Both were released late on Friday.

According to one of the polls, Bolsonaro's administration was rated as bad or terrible by 40% of respondents, compared with 32% in an early-December survey. Just under a third of respondents rated Bolsonaro's government as good or excellent, versus 37% in the previous poll.

The poll results are a blow for the president. The Folha de S.Paulo newspaper said they represent the biggest drop in approval since the beginning of his government in 2019.

Brazilians have grown increasingly irate at the slow pace of Brazil's vaccine rollout, which began last weekend but remains blighted with few vaccines to inoculate the country's 210 million people and stall a snowballing second wave.

Pot-banging protests, a hallmark of the early days of the pandemic, erupted in some cities earlier this month, and both left- and right-wing groups convened pro-impeachment marches across the country this weekend.

To make matters worse, a new virus variant has appeared in the north of the country that researchers believe has higher levels of transmissibility. Some countries have barred entry for Brazilian travelers.

Bolsonaro, a former army captain, is already under pressure for his handling of the outbreak. He has sought to minimize the gravity of the virus and even said he won't take any COVID-19 shot, stoking growing anti-vaccine sentiment.

On Saturday, the Health Ministry said 1,202 more people had died from COVID-19, bringing total fatalities to 216,445. There have been more than 8.8 million confirmed cases.

Another Datafolha poll found that 53% of respondents are against Congress opening impeachment proceedings against the president for his handling of the pandemic, compared with 50% in a previous survey. Those favoring impeachment fell to 43% from 46% previously.

Both polls were conducted on Jan 20-21, interviewing 2,030 Brazilians, with a 2 percentage point margin of error.