By Vivian Sequera and Ueslei Marcelino LA PAZ/SANTA CRUZ (Reuters) - Protests over a disputed presidential election convulsed Bolivia on Tuesday as police fired tear gas in the capital and the sitting president and opposition candidate wrestled over an audit of the results. The brief suspension of publication of the results from an electronic count of the Oct. 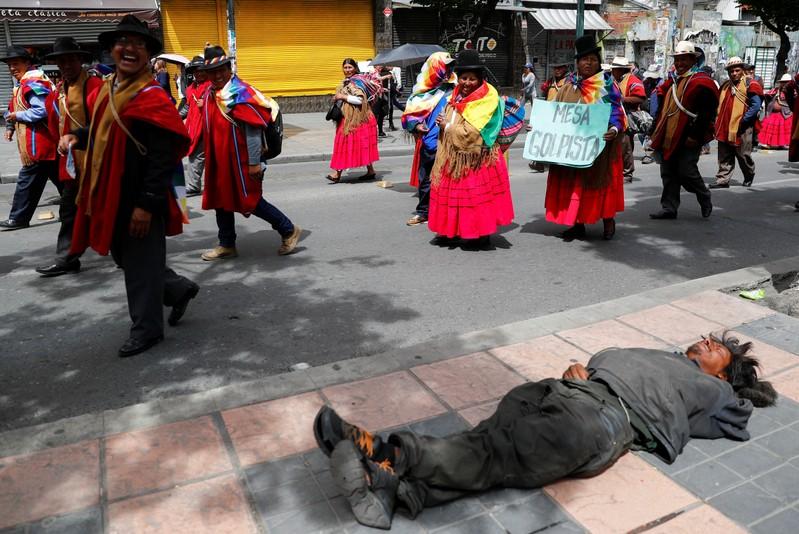 By Vivian Sequera and Ueslei Marcelino

LA PAZ/SANTA CRUZ (Reuters) - Protests over a disputed presidential election convulsed Bolivia on Tuesday as police fired tear gas in the capital and the sitting president and opposition candidate wrestled over an audit of the results.

The brief suspension of publication of the results from an electronic count of the Oct. 20 presidential election has triggered protests and strikes that have closed roads, schools and businesses around the nation for more than a week.

President Evo Morales, a leftist seeking a fourth term, was eventually declared the winner, prompting accusations of fraud from opposition candidate Carlos Mesa and his supporters.

Tear gas was used in at least two locations to disperse protesters.

Morales, who has been in office nearly 14 years and is Latin America's longest-serving leader, has said the Organization of American States (OAS) will audit the election and that he will go to a second round if fraud is found.

The Supreme Electoral Tribunal (TSE) and Morales, 60, both deny any irregularities.

"We, in the most transparent and secure way, confident in the sovereignty of the people, have invited an international audit," Vice President Alvaro Garcia told reporters early on Tuesday.

"We have called on the OAS and brother countries so they can clear up any doubt with respect to the malicious campaign of the losing candidate, who refuses to accept the decision of the Bolivian people," Garcia said.

"We want to ask Carlos Mesa, the losing candidate, to join the audit," he added. "We await a speedy and affirmative response."

With 84% of the votes counted on Oct. 20, polling showed Morales was likely headed to a runoff with Mesa. However, when reporting resumed after nearly 24 hours, it showed Morales had pulled off a razor-thin victory.

The final, legally binding vote tally gave him 47.08% of votes to Mesa's 36.51%, less than a percentage point more than the 10-point margin needed to avoid a runoff.

Mesa told journalists in the industrial city of Santa Cruz he wanted assurances from the government that the results of any recount will be binding.

"Are they prepared to recognise the TSE's final results?" Mesa asked. "Is the government prepared to back down?"

Protesters in the streets lobbed accusations of fraud at Morales.

"The audit doesn't help now," said Pamela Velez, 37, as police deployed gas at a barricade in the central part of the city. "(The Morales government) has had a week to fix up (the vote)."

Mesa, a former president, told Reuters in an interview on Monday that strikers would not accept negotiations to end protests.

Five protesters were injured by gunshots on Monday in Santa Cruz. Police have said they are investigating the incident.