By Tom Perry and Ellen Francis BEIRUT (Reuters) - An old rivalry between Christian factions who fought each other in Lebanon's 1975-1990 civil war has flared again on the street and in political debate, renewing fears of fresh unrest as the nation grapples with its worst crisis since the conflict. Never far from the surface in the past three decades, the feud between supporters of Michel Aoun, now Lebanon's president, and Samir Geagea's Lebanese Forces (LF) led to a tense standoff this week near Beirut. Gunshots rang out, but no one was hurt. 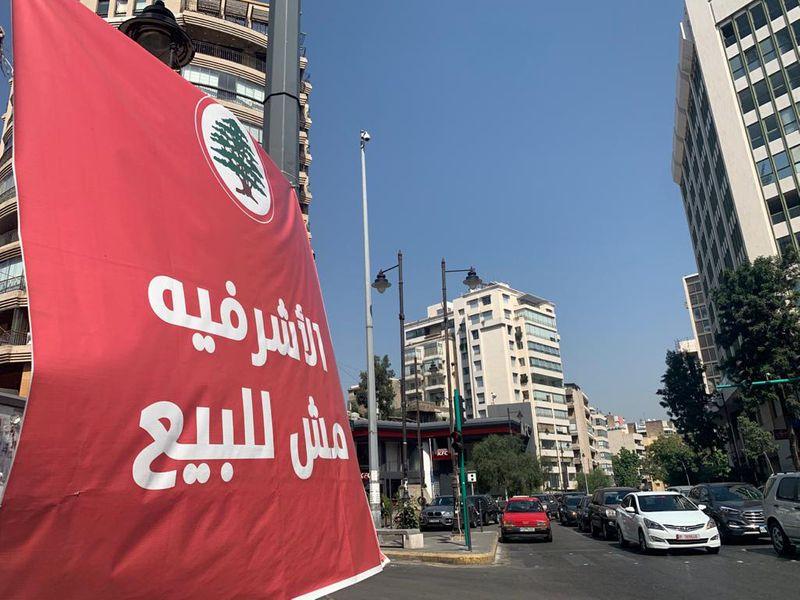 By Tom Perry and Ellen Francis

BEIRUT (Reuters) - An old rivalry between Christian factions who fought each other in Lebanon's 1975-1990 civil war has flared again on the street and in political debate, renewing fears of fresh unrest as the nation grapples with its worst crisis since the conflict.

Never far from the surface in the past three decades, the feud between supporters of Michel Aoun, now Lebanon's president, and Samir Geagea's Lebanese Forces (LF) led to a tense standoff this week near Beirut. Gunshots rang out, but no one was hurt.

There were rival accounts about who fired in the air. But those on both sides, some born after the war, said Monday's events were a reminder of a long-running enmity, one of many in Lebanon's fractious sectarian system now facing new strains amid an economic meltdown.

The rivalry today is about more than Christian politics: Aoun is allied with Hezbollah, the heavily armed, Iran-backed Shi'ite party. Geagea spearheads opposition to Hezbollah, saying it should surrender its weapons.

"There are limits they cannot cross," said Elias al-Zoghby, a member of Aoun's Free Patriotic Movement (FPM), saying an LF convoy of supporters waving flags had acted provocatively by driving towards his party's headquarters.

"We hope they'll remember the past and that nobody can win the game of the street," LF activist Toni Bader said, denying the FPM's account.

The standoff was the latest in a country that has seen sporadic violence intensify as an economic crisis that erupted last year has deepened. It was compounded by a huge blast that ripped through Beirut on Aug. 4. The government has resigned and efforts to form a new one under French pressure are floundering.

Troops deployed to defuse Monday's face-off, which spiralled when Geagea supporters in cars and on motorcycles, waving LF flags and chanting partisan songs, drove near the FPM offices.

Geagea loyalists were marking the anniversary of the 1982 assassination of Bashir Gemayel, who founded what began as the LF militia. LF officials say their supporters were unarmed and only passing near the FPM offices when the other side fired.

FPM officials say the supporters of the LF, which disarmed at the end of the war, were threatening to attack. They said the guns were fired by security forces.

The army said shots were fired in the air without saying by whom. It said LF supporters had thrown stones at the FPM office.

One video showed men firing machine guns into the air. In another, men in masks cursed as they burned an LF flag.

"It became clear the street is really boiling again between them," said prominent journalist Nabil Boumonsef.

Both sides have called for restraint, while accusing each other of acting like a militia. Geagea, who led the LF militia forces, and Aoun, who commanded the army at the end of the civil war, have not themselves commented.

After the war, both leaders were forced out of political life as next door Syria dominated politics. Geagea was imprisoned and Aoun went into exile in France. Both returned to the scene in 2005 once Syrian troops withdrew from Lebanon.

Patriarch Bechara Boutros Al-Rai, leader of the Maronite church, who has influence as leader of Lebanon's biggest Christian community, has weighed in and called for change in the way Lebanon is governed. Aoun and Geagea are both Maronites.

Monday's incident was one of several events that have stoked tension. LF scouts, usually young party supporters, have staged prominent parades at party events. A group of about 20 LF loyalists, dressed in black uniforms, goose-stepped in formation through a Christian district of Beirut this week.

FPM members say these are provocative shows of strength. The LF says such parades are routine and the FPM's criticism is an attempt to hide its political failure.