By Paresh Dave and Andy Sullivan OAKLAND, Calif./WASHINGTON (Reuters) - When election officials in at least 29 U.S. counties face an expected avalanche of mail-in ballots in the Nov 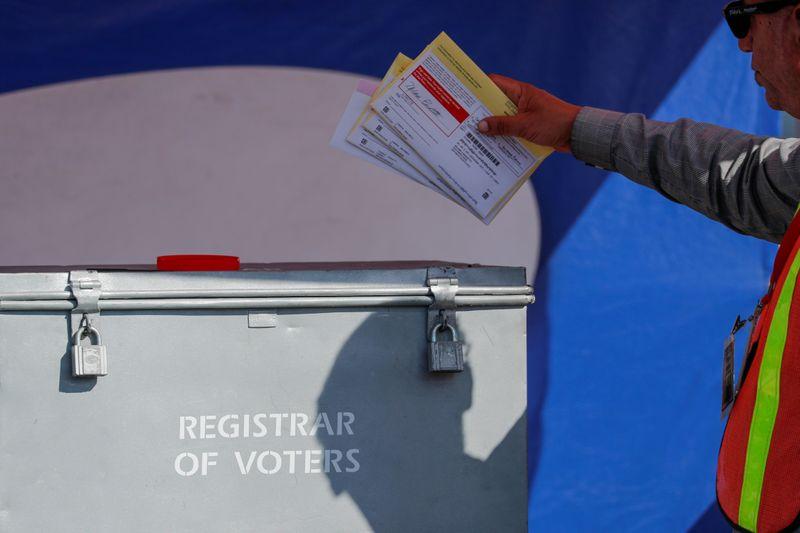 By Paresh Dave and Andy Sullivan

OAKLAND, Calif./WASHINGTON (Reuters) - When election officials in at least 29 U.S. counties face an expected avalanche of mail-in ballots in the Nov. 3 presidential election due to the coronavirus pandemic, they will not rely on eyes alone to verify voters' signatures.

They will also use software to approve signatures and guard against fraud, a Reuters survey found, a trend that voting technology experts cautiously welcome. Parascript, a Colorado company that says it helps banks identify check fraud, developed the technology.

The software could reduce the inconsistency and bias inherent when humans decide whether the signature on a ballot envelope matches what governments have on file, officials and voting rights advocates say.

But absent clear standards, officials have replaced one set of variables with another in the at least eight states that have counties using the software. Two of the states, Florida and Nevada, are considered swing states where either Joe Biden, a Democrat, or President Donald Trump, a Republican, could win.

The software's performance variability is visible in Colorado, where the technology approves about 40% of signatures in Republican-leaning Douglas County, 20% in Democratic Denver County, and 50% in the swing county of Larimer, Reuters found. Colorado law requires that staff review at least 2% of the software's approvals.

Two California counties audit all of the software's approvals, while Oregon's Multnomah County initially double-checks everything and then a few a day as counting continues. Pierce County, Washington, reviews at minimum 3% of software approvals and also the ones passed with least confidence.

AN ERROR IS A LOST VOTE

The counties emphasized that staff examined every signature that software could not verify, meaning no ballot was tossed without human review.

But election officials said they had not analyzed the software's outcomes to determine whether it treats racial or other demographic groups differently. The outcomes should be examined, as they can influence human reviewers, nonpartisan election experts said.

"An error here is someone losing their chance to vote," said Michael Herron, government professor at Dartmouth College.

The artificial intelligence software aims to automate validating a voter's signature - a measure enforced in 33 states, at least eight of which use software.

Nineteen states, including those eight, let voters appeal signature rejections, which advocates contend younger voters and Black and Hispanic voters are more likely to experience than others.

More than 175,000 absentee ballots did not count in the 2016 presidential election because of signature discrepancies, the top reason for rejection. Voting advocates warn that number could surge this election as millions more Americans vote by mail.

The shift to mail-in voting has increased the burden on election officials even as the digital economy has decreased the emphasis on careful signing of documents, prompting scrutiny on verification methods.

Linton Mohammed, a forensic document examiner who testified in election cases, described signatures as poor for voter authentication because of the variance in them over time and inadequate training for some reviewers.

Parascript's software aims to address those concerns by running black-and-white scans through seven algorithms. They study character strokes, spacing and other attributes to score whether the signature matches one on file.

The software allows officials in each of the 29 counties to set their own minimum scores for approving signatures, a variable that experts want studied.

The software, which debuted about a decade ago and can cost $7,000 annually, can process 1,000 signatures a minute, compared with two to three by a worker.

Proponents said it was reliable, saved time and allowed staff to focus on problematic signatures. Only one official could identify a slip-up: The software accepting "deceased" as a match for a voter named Denise in Oregon.

"In the time I've been here, five elections, it has never failed an audit," said Jack Twite, deputy of elections in Douglas County, Colorado.

For instance, the signature approval rate for Adams County, Colorado, jumped when it boxed the signature space on envelopes, generating more readable images. Larimer's percentage fell as more signatures on file came from motor vehicle records that were too fuzzy for software analysis.

The lack of standardization has left room for debate, even as at least 10 additional counties said they may adopt the software next year.

"We don't view that as a best practice," Bucaro said.

Angela Myers, clerk and recorder for Larimer, said the laborious process demanded significant automation. "We love it," she said.

Portia Allen-Kyle, associate director at the nonpartisan group Voting Rights Lab, said the public should be able to vet the software to ensure it is fair for all voters.

"We have an opportunity to regulate automated signature verification programs before they become even more embedded, unchecked, into our electoral system," she said.