By Douglas Busvine BERLIN (Reuters) - BioNTech is working flat out with partner Pfizer to boost production of their COVID-19 vaccine, its founders said, warning there would be gaps in supply until other vaccines were rolled out. 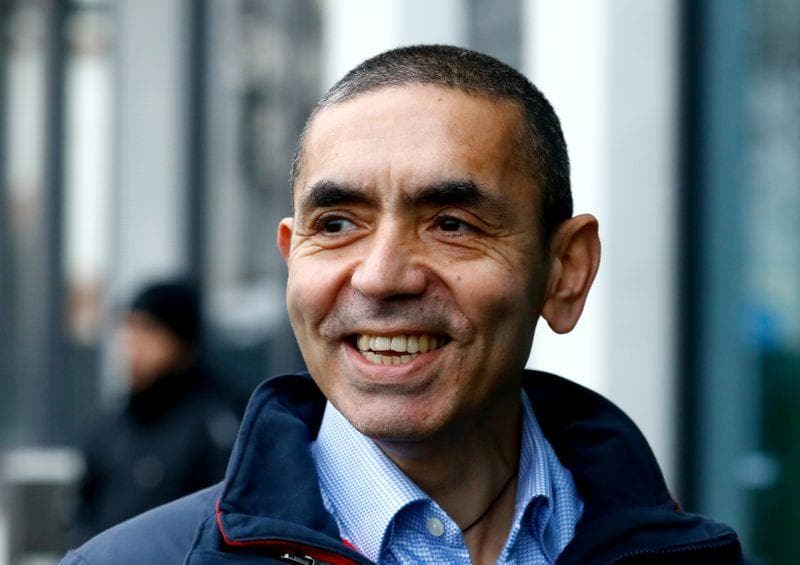 vaccine, its founders said, warning there would be gaps in supply until other vaccines were rolled out.

The German biotech startup has led the vaccine race but its shot has been slow to arrive in the European Union because of relatively late approval from the bloc's health regulator and the small size of the order placed by Brussels.

The delays in rolling out the home-grown vaccine have caused consternation in Germany, where some regions had to halt vaccinations within days of starting an inoculation drive.

"At the moment it doesn't look good - a hole is appearing because there's a lack of other approved vaccines and we have to fill the gap with our own vaccine," BioNTech CEO Ugur Sahin told news weekly Spiegel.

Sahin founded BioNTech with his wife, Oezlem Tuereci, who is the company's chief medical officer. Both faulted the EU's decision to spread orders in the expectation that more vaccines would be approved quickly.

The United States ordered 600 million doses of the BioNTech/Pfizer shot in July, while the EU waited until November to place an order half that size.

"At some point it became clear that it would not be possible to deliver so quickly," Tuereci told Spiegel. "By then it was already too late to place follow-on orders."

After publication of the interview, BioNTech said it was in talks with Brussels on boosting output

“We are in productive discussions with the European Commission on how to make more of our vaccine in Europe, for Europe," a spokeswoman said.

BioNTech hopes to launch a new production line in Marburg, Germany, ahead of schedule in February, with the potential to produce 250 million doses in the first half of 2021, said Sahin.

Talks are also under way with contract manufacturers and there should be greater clarity by the end of January, he added.

Health Minister Jens Spahn said on Twitter that German authorities would do everything possible to enable a swift start in Marburg.

The federal government, which has backed BioNTech with 375 million euros ($458 million) in funding, has resisted calls from opposition leaders to speed production of its vaccine by issuing compulsory licences to other drugmakers.

Another vaccine from Moderna is expected to be cleared by the European Medicines Agency (EMA) on Jan. 6.

Spahn has also urged the EMA to quickly approve the Oxford University-AstraZeneca shot cleared by Britain. The EU timeline for that treatment remains uncertain.

That vaccine was approved by India's drug regulator on Friday for emergency use, two sources with knowledge of the matter told Reuters.

Sahin said the BioNTech/Pfizer vaccine, which uses messenger RNA to instruct the human immune system to fight the coronavirus

, should be able to cope with a new, more contagious variant first detected in Britain.

"We are testing whether our vaccine can also neutralise this variant and will soon know more," he said.

Asked about coping with a strong mutation, he said it would be possible to tweak the vaccine as required within six weeks - though such new treatments might require additional regulatory approvals.

Sahin also said BioNTech would make its vaccine, which requires storage at about minus 70 degrees Celsius (minus 94 Fahrenheit), easier to handle, adding that a next-generation vaccine could be ready by late summer.