By James Oliphant WASHINGTON (Reuters) - Former U.S. Vice President Joe Biden has shown surprising strength in the first three weeks of his campaign for the Democratic presidential nomination, prompting a persistent question: Can anyone stop him? Biden holds a significant lead in opinion polls over the 23 other Democratic contenders 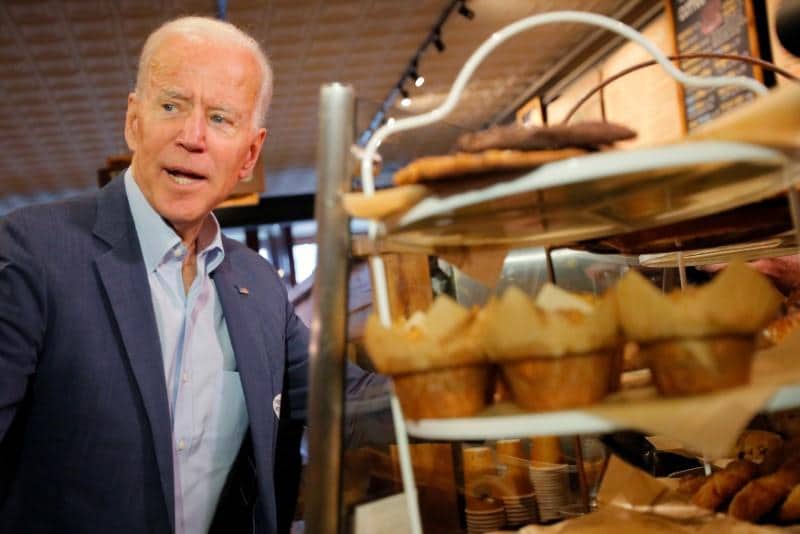 WASHINGTON (Reuters) - Former U.S. Vice President Joe Biden has shown surprising strength in the first three weeks of his campaign for the Democratic presidential nomination, prompting a persistent question: Can anyone stop him?

Biden holds a significant lead in opinion polls over the 23 other Democratic contenders. Republican President Donald Trump is treating him like his top threat in 2020.

Ahead of his formal campaign kickoff on Saturday at an outdoor rally in Philadelphia, Biden, 76, has seemingly put to rest doubts about his age and his ability to raise money as well as questions over whether he is out of step with the Democratic Party.

“The rest of the race now revolves around Joe Biden,” said Joe Trippi, a longtime Democratic operative who is not aligned with the campaign.

But traps may lie ahead. The first major opportunity for Biden’s competitors to dent his lead comes next month in the first of a dozen Democratic presidential debates.

Biden could find himself as the leading target of attacks, particularly from progressives. He also has a history of gaffes, something that could be problematic in the national spotlight.

According to Real Clear Politics, Biden is backed by about 40% of the Democratic electorate on average in opinion polls, giving him more than a 20 percentage-point lead over his nearest challenger, U.S. Senator Bernie Sanders of Vermont.

Experienced presidential strategists told Reuters that while they expect some other Democrats to eventually become top contenders, Biden’s strength is likely sustainable.

They cited two main factors: The massive Democratic field makes it difficult for any one candidate to stand out, and voters tend to be risk-averse when seeking a candidate to topple a sitting president.

In recent elections, early front-runners such as Democrat Al Gore, himself a former vice president, in 2000 and Republican Mitt Romney in 2012 largely kept a lock on the nomination, despite some bumps along the way.

In 2008, Democratic favorite Hillary Clinton was overtaken by Barack Obama to secure the nomination, but Obama took advantage of a relatively small field to steadily amass support as the top alternative to Clinton. When Clinton ran again in 2016, Sanders tried to do the same thing with a similarly small field and almost succeeded.

That becomes exponentially harder with the 2020 scrum, with its 20-plus candidates all vying for attention and money. Trippi said more than a dozen Democrats trying to challenge Biden have consulted Trippi on strategy.

“I’ve told every single one of them that Joe Biden is going to be more formidable than they thought, and it was going to be tough for anyone to emerge from this field,” he said.

Biden also is aided by the perception among some voters that he may be a safer choice to take on Trump than a less-known politician.

In the 2004 primary, Democrat John Kerry, a longtime party fixture with a strong national-security background, used that argument to wrest the nomination from Howard Dean, like Sanders an upstart progressive from Vermont.

Shrum cautioned, however, the 2020 race could still shift. Biden would be the oldest president ever elected, and he will need to “seem vigorous and energetic" at the debates, Shrum said.

“This is a dynamic process," Shrum said. "It is not frozen in amber. A lot depends on his conduct.”

Biden, who spent 40 years in the U.S. Senate and two terms as Obama's vice president, must also defend his record to progressive voters who view him as too moderate.

In the past week alone, Biden has been challenged over his stance on combating climate change and his support for the 1990s crime bill, which is viewed by critics as leading to mass incarceration of African-Americans.

“When we get to that whites-of-their-eyes stage of the campaign and candidates realize the only way to improve their market share is to take Biden head-on, that's when the real test begins,” said Kevin Madden, a former top aide to Romney.

Those tensions within the party could lead to some tough stretches for Biden, despite his current position. In 2012, Romney was the early front-runner, only to yield to challengers such as Rick Perry and Rick Santorum at different times before finally re-asserting himself as the favorite.

Madden said Romney's campaign made hats with the slogan “The Long Slog” for a reason.

“No one is going to give you the nomination,” he said, “and every other candidate has a plan to take it away from you.”