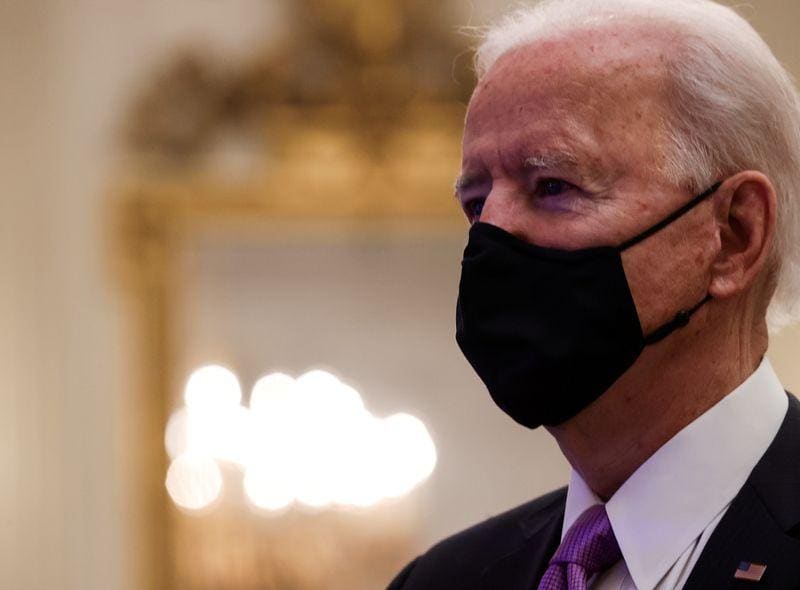 WASHINGTON (Reuters) - U.S. President Joe Biden will seek a five-year extension to the New START arms control treaty with Russia, the White House said on Thursday, in one of the first major foreign policy decisions of the new administration ahead of the treaty's expiration in early February.

"The President has long been clear that the New START treaty is in the national security interests of the United States. And this extension makes even more sense when the relationship with Russia is adversarial as it is at this time," White House press secretary Jen Psaki said in a briefing.

She also said Biden had "tasked" the U.S. intelligence community for its full assessment of the Solar Winds cyber breach, Russian interference in the 2020 election, Russia's use of chemical weapons against opposition leader Alexei Navalny and alleged bounties on U.S. soldiers in Afghanistan.

"Even as we work with Russia to advance U.S. interests, so too we work to hold Russia to account for its reckless and adversarial actions," Psaki said.

The arms control treaty, which is due to expire on Feb. 5, limits the United States and Russia to deploying no more than 1,550 strategic nuclear warheads each.

In addition to restricting the number of deployed strategic nuclear weapons to its lowest level in decades, New START also limits the land- and submarine-based missiles and bombers that deliver them.

In a statement, the Pentagon said that Americans were "much safer" with the treaty intact and extended.

"Just as we engage Russia in ways that advance American interests, we in the Department will remain clear-eyed about the challenges Russia poses and committed to defending the nation against their reckless and adversarial actions," Pentagon spokesman John Kirby said.

The treaty’s lapse would end all restraints on deployments of U.S. and Russian strategic nuclear warheads and the delivery systems that carry them, potentially fueling a new arms race, policy experts have said.

Earlier, a source familiar with the decision told Reuters that U.S. lawmakers have been briefed on Biden's decision on the New START treaty.

The Kremlin said on Wednesday it remained committed to extending New START and would welcome efforts promised by the Biden administration to reach agreement.