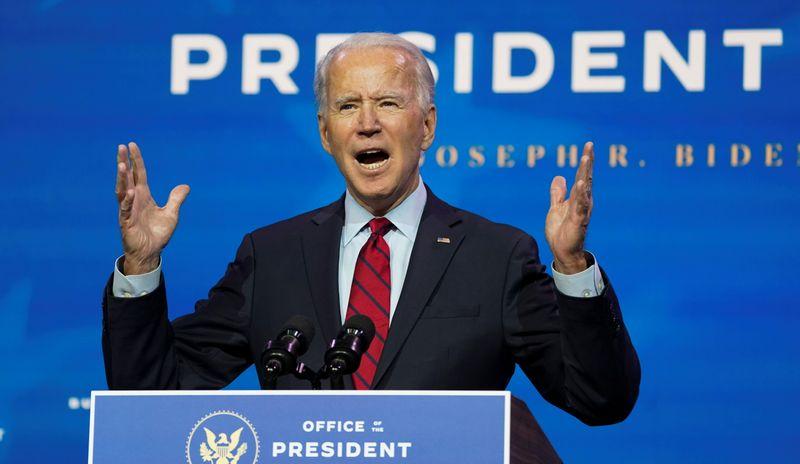 By Simon Lewis and Joseph Ax

WILMINGTON, Del. (Reuters) - President-elect Joe Biden said it was the "right moment" in U.S. history for his nominee for defense secretary, retired Army General Lloyd Austin, despite concerns about the recently out-of-uniform soldier taking on a role reserved by law for civilians.

The choice of Austin, who if confirmed would be the first Black U.S. secretary of defense, requires both houses of Congress to waive a law requiring the military's top brass to have been out of the armed forces for at least seven years before running the Pentagon. Austin, 67, retired in 2016.

In announcing his pick in Wilmington, Delaware, Biden called Austin "the right person for this job at the right moment.”

"I would not be asking for this exception if I did not believe this moment in our history didn’t call for it - does call for it - and if I didn’t have the faith I have in Lloyd Austin," the Democrat said.

Biden has pledged to name a Cabinet that reflects America's diversity and his nominees so far have included several firsts, including Janet Yellen, who would be the nation's first woman Treasury secretary, and Alejandro Mayorkas, who would be the first immigrant to run the Department of Homeland Security.

Senator Kirsten Gillibrand told reporters on Wednesday she looked forward to meeting Austin but that the required waiver was a big concern. "My view is that civilian control of the military is part of our constitutional principles," she said.

The Democratic chairman of the House of Representatives Armed Services Committee, Adam Smith, said while he also had concerns, he did not reject Biden's choice.

Austin should meet with members of the House committee "so they can ask questions about civilian control of the military, and ... be assured that General Austin is committed to this important principle,” Smith said in a statement late on Tuesday.

Austin said in Wilmington on Wednesday: “I come to this new role as a civilian leader – with military experience to be sure – but also with a deep appreciation and reverence for the prevailing wisdom of civilian control of our military.”

An intensely private man, Austin avoided the spotlight during a distinguished four-decade career in uniform, including a stint as head of the military's Central Command, which oversees U.S. troops across the Middle East.

His nomination follows a year of reckoning in the United States over systemic racism and injustice after a series of police killings of Black Americans, and as many call for greater diversity in the leadership of the armed forces, whose top tier has been largely white.

Biden is more than halfway through the nominees for his Cabinet ahead of his Jan. 20 inauguration.

Former Iowa Governor Tom Vilsack will be nominated as agriculture secretary, according to two sources familiar with the decision. Vilsack held the same role during the Obama administration, in which Biden was vice president.

Biden also plans to nominate Marcia Fudge, a Black congresswoman from Ohio, as his housing and urban development secretary, according to news reports.

Biden is likely to spend much of his first few months focused on the coronavirus pandemic and the struggling economy.

Senate Democratic leader Chuck Schumer met four members of Biden's economic team, including Yellen and Office of Management and Budget director nominee Neera Tanden, on Wednesday and said he wanted to see commitment from them to more COVID-19 relief.

"We need a large, bold program to stimulate the economy, help people out of the conditions they’re in, but keep the economy going for a long period of time, and I am committed to working with you," Schumer said, according to a transcript.

The other nominees at the meeting were Wally Adeyemo for deputy Treasury secretary and Celia Rouse, who would chair the Council of Economic Advisers.

Biden vowed on Tuesday to distribute 100 million coronavirus vaccines in his first 100 days and to make reopening schools a "national priority." He implored Americans to wear masks to slow the spread of the virus, which has killed more than 287,000 in the United States.

Trump has not conceded the Nov. 3 election, claiming contrary to evidence that there was widespread electoral fraud.

The state of Texas has filed a petition with the U.S. Supreme Court challenging the election outcome in four other states, a lawsuit that legal experts said had little chance of success. Seventeen U.S. states filed a brief at the Supreme Court on Wednesday in support of Texas' bid.

On Tuesday, the nation's highest court refused to block Pennsylvania from formalizing Biden's victory there, rejecting a request to hear an argument that the state's 2019 expansion of mail-in voting was illegal.