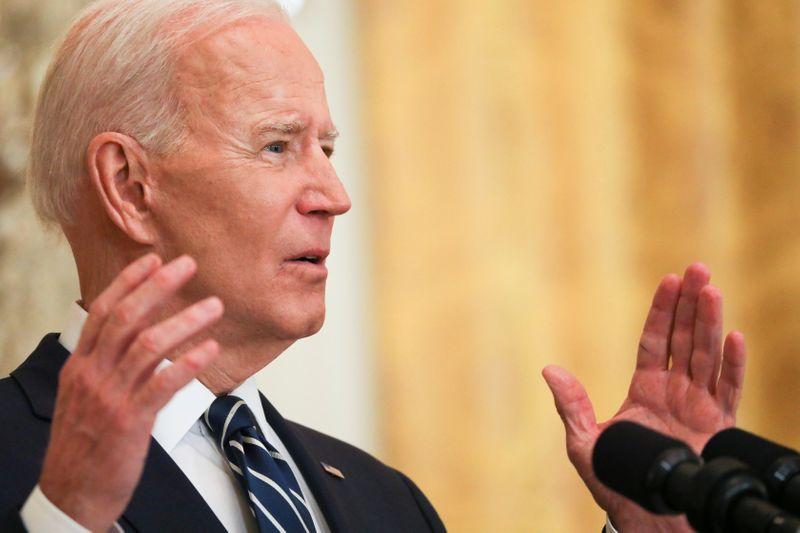 WASHINGTON (Reuters) - U.S. President Joe Biden on Thursday said he had made it clear to Chinese President Xi Jinping that the United States was not looking for confrontation, but would insist that China play by international rules for fair competition and fair trade.

Biden said he spent "hours upon hours" with Xi when he served as vice president under former President Barack Obama, and was convinced the Chinese leader believed that democracy doesn't have a future.

"He's one of the guys, like (Russian President Vladimir) Putin, who thinks that autocracy is the wave of the future, (and) democracy can't function in an ever-complex world," Biden told a news conference at the White House.

The president said he had a different view of the future, one that would require investing heavily in U.S. workers and science in order to compete with China.

"We're not looking for confrontation, although we know there will be steep, steep competition," Biden said. "We'll insist that China play by the international rules - fair competition, fair practices, fair trade."

Biden said the United States would work with allies to hold China accountable for its actions on Taiwan, Hong Kong, the South China Sea and its treatment of the Uighur minority.

He said he spoke with Xi for two hours after taking office and told him: "And as long as you and your country continue to so blatantly violate human rights, we are going to continue in an unrelenting way to call it to the attention of the world, and make it clear, make it clear, what’s happening. And he understood that."