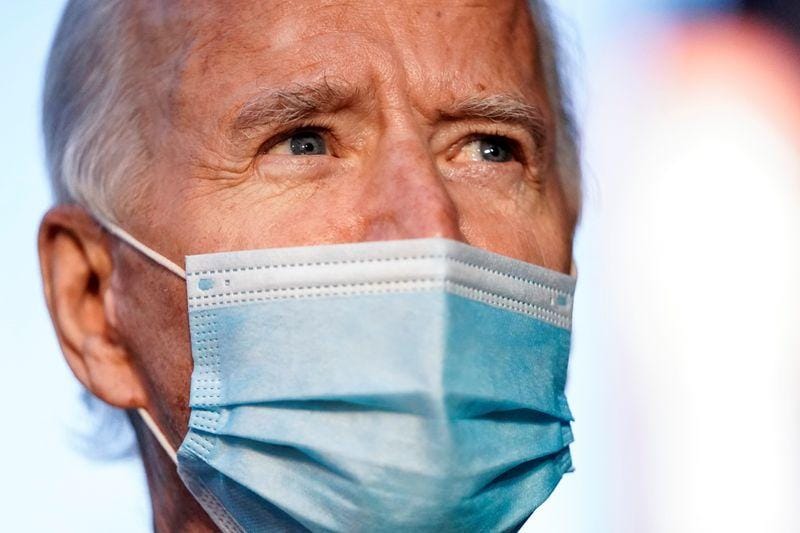 WILMINGTON, Del. (Reuters) - U.S. President-elect Joe Biden will reveal his economic team and other key nominees next week, aides said on Wednesday, while he received belated congratulations for his election victory from China's President Xi Jinping.

The Democratic former vice president was scheduled to give a speech later on Wednesday highlighting the challenges Americans face as COVID-19 cases surge on the eve of the Thanksgiving holiday.

Biden introduced his foreign policy and national security team on Tuesday as he begins a formal transition to the White House after defeating Republican President Donald Trump. The president-elect has promised to make fighting the pandemic a top priority after taking office on Jan. 20.

China's foreign ministry, though not Xi himself, congratulated Biden on Nov. 13, nearly a week after many U.S. allies had, holding out as Trump refused to concede defeat. The president is still challenging the election results on the basis of unsubstantiated voting fraud claims.

In his congratulatory message to Biden on Wednesday, Xi said healthy ties between the world's two biggest economies were not only in the fundamental interests of their two peoples but also expected by the international community, the official Xinhua news agency reported.

During the election campaign, Biden vowed a tough line on China's expanding influence worldwide and referred to Xi more than once as a "thug" for his human rights practices. A Biden transition official said, "We appreciate the congratulations from all world leaders who have conveyed them, including President Xi."

Trump has marked his last year in office with frequent China-bashing. The two countries sparred over China's handling of the coronavirus pandemic - a public health crisis that Trump sometimes has called the "China plague" - as well as deteriorating freedoms in Hong Kong and territorial issues in the South China Sea. Trump also presided over trade tensions with China.

Mexican President Andres Manuel Lopez Obrador on Wednesday again declined to congratulate Biden. Privately, Mexican officials have said he is wary of antagonizing Trump, who during his presidency threatened to hurt Mexico economically if it did not curb illegal immigration.

Biden plans to name his choices next week for key positions in his administration, including his economic team, communications director Kate Bedingfield said. They are expected to include former Federal Reserve Chair Janet Yellen as U.S. treasury secretary.

Biden said on Tuesday his team has been able to coordinate with the Trump administration on the pandemic, vaccine distribution plans and national security since getting the green light on Monday for formal transition efforts. Biden was expected to receive his first presidential daily intelligence briefing on Monday, Bedingfield said.

Biden transition adviser Jen Psaki said classified information was already being shared with Biden's senior team. Psaki said the Biden camp's review of federal agencies is focusing on fact-finding on the government's pandemic response and urgent national security threats including adversaries who might seek to exploit the transition period.

Bedingfield added that Biden's team has been encouraged by the "professional and welcoming response" of civil servants, and downplayed the impact of the Trump administration's delay in beginning the transition process.

Biden's planned address is meant to offer encouragement during an intensifying pandemic and focus on the sacrifices Americans are making during the holiday season, his office said, as officials across the country plead with people to stay at home and avoid large gatherings that could spread the pathogen.

About 260,000 Americans have died from COVID-19 and infections are surging on a national scale.

Millions of Americans have flocked to airports and highways in the days before Thursday's holiday, leading to the busiest U.S. travel period since the early days of the pandemic in March, though well below pre-pandemic holiday levels.

Trump has waged a failed legal battle to overturn the election results, falsely claiming it was stolen. Critics have said Trump's refusal to accept the results has damaged American democracy and undercut Biden's ability to fight the pandemic and prepare to deal with national security threats.

Trump canceled a trip to accompany his personal attorney, Rudy Giuliani, to a Pennsylvania Senate committee meeting in Gettysburg, where Giuliani repeated his unsubstantiated claims of voting fraud.

Bedingfield called the Gettysburg event on Wednesday "a sideshow."

Trump retweeted a link to a story about a poll showing a majority of U.S. Republicans would vote for him if he ran again in 2024.