By Susan Heavey and Gabriella Borter WASHINGTON (Reuters) - President-elect Joe Biden on Tuesday led a national memorial observance on the eve of his inauguration to honor the 400,000 Americans who have died from COVID-19 during the 11 months since the novel coronavirus claimed its first U.S. victim. The sundown commemoration came just hours before President Donald Trump was due to leave the White House and hand over a country in crisis. 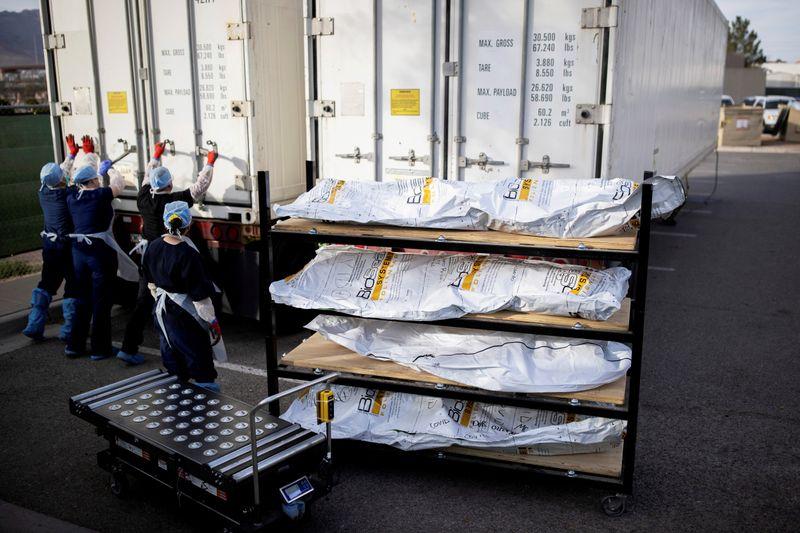 WASHINGTON (Reuters) - President-elect Joe Biden on Tuesday led a national memorial observance on the eve of his inauguration to honor the 400,000 Americans who have died from COVID-19 during the 11 months since the novel coronavirus claimed its first U.S. victim.

The sundown commemoration came just hours before President Donald Trump was due to leave the White House and hand over a country in crisis. The ceremony, spearheaded by Biden and Vice President-elect Kamala Harris from the base of the Lincoln Memorial, marked the federal government's first official nod to the staggering death toll from the pandemic.

"We must remember. It's hard sometimes to remember, but that's how we heal. It's important to do that as a nation," Biden said in brief remarks to kick off a tribute that was to include observances in cities across the country.

As darkness fell over the nation's capital, 400 electric lamps lining the sides of the Reflecting Pool were illuminated to honor the 400,000 lives lost, followed by gospel singer Yolanda Adams' performance of the song "Hallelujah," then a moment of silence in memory of the COVID-19 dead.

"Though we may be physically separated, we the American people are united in spirit," Harris said separately.

A hospital nurse from Michigan, Lori Marie Key, sang "Amazing Grace" before Biden took to the podium. About 4 miles (6.5 km) from where Biden appeared, the bells of the National Cathedral were tolled 400 times after he spoke.

The United States surpassed 24 million COVID-19 infections and 400,000 lives lost from the virus on Tuesday, according to a Reuters tally. The country has recorded more than 200,000 new cases and 3,220 deaths on average over the last seven days. (Graphic: https://tmsnrt.rs/34pvUyi)

Among the other landmarks participating in the lighting ceremony were the Empire State building in New York City and the Space Needle in Seattle, Biden's inaugural committee said in a statement. The committee also said it was encouraging Americans to light candles in their windows and churches to ring their bells in a show of unity.

Local officials from Miami, Florida, to San Diego, California, said buildings in their cities were expected to be specially illuminated for the occasion.

The Cathedral of St. John the Divine in New York City was inviting the public to light a candle on its front steps on Tuesday evening before a solemn bell toll.

The observance marked the beginning of a new era in the country's battle against COVID-19 under Biden, who has pledged to make coronavirus relief a top priority when he takes office on Wednesday under unprecedented security measures in the nation's capital.

Biden will inherit a grieving and sickened nation from Trump, who critics say was to blame for a disjointed and ineffectual response to the pandemic, resulting in the United States suffering the highest COVID-19 national death toll in the world.

On Tuesday, his last full day as president, Trump had no public events scheduled, although U.S. Vice President Mike Pence was planning to convene the White House Coronavirus Task Force for its last meeting under his watch.

Many of Biden's policy plans fly in the face of the Trump administration's approach to combating the pandemic. They include a mask mandate that would apply to federal properties, planes and buses and a recommitment to the World Health Organization after Trump's withdrawal from the agency.

Biden will also face the daunting task of overseeing the nation's COVID-19 vaccine distribution and administration. The United States is trailing in its vaccination goal, with only 12.3 million shots administered out of more than 31 million distributed as of Jan. 15, according to the Centers for Disease Control and Prevention.

States, tasked with rolling out their own vaccine programs, have lamented a lack of funding and support from the federal government. Some localities say they do not have adequate supply to meet demand.

Mayor Bill de Blasio on Tuesday warned New York City will run out of vaccine doses as soon as Thursday and will be forced to cancel many appointments if it does not get resupplied quickly.

"We will have literally nothing left to give as of Friday," de Blasio told a news conference.