By Michael Martina, Simon Lewis and Arshad Mohammed (Reuters) - Antony Blinken, a veteran diplomat and longtime confidant of President-elect Joe Biden, is expected to play a senior role as the incoming administration looks to jettison President Donald Trump's 'America First' agenda and restore relations with U.S. allies. With his decades of experience on Capitol Hill, at the White House and as the former No. 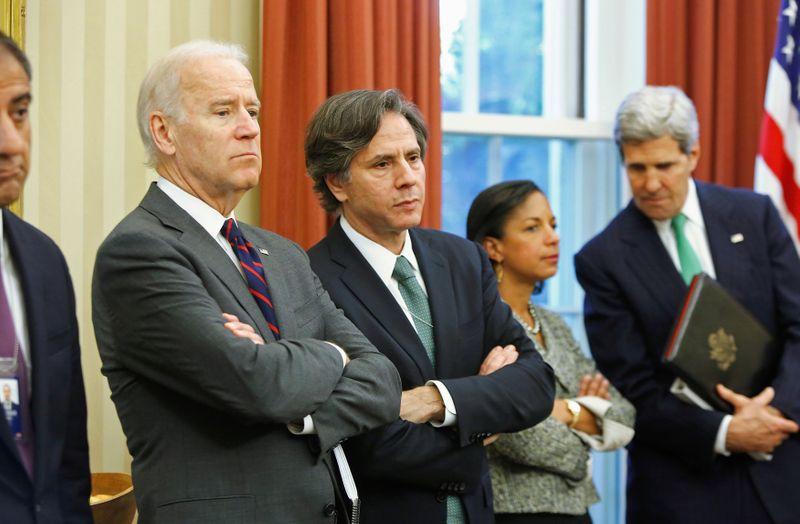 With his decades of experience on Capitol Hill, at the White House and as the former No. 2 at the State Department, Blinken is widely seen in Washington as a natural fit to be Biden's national security adviser or a possible pick for secretary of state.

Biden has not discussed what role Blinken will fill in the new administration. A spokesman for his transition team said on Monday that no personnel decisions had been made "at this time." It declined to make Blinken available for comment.

Blinken's top government roles included serving as deputy national security adviser from 2013 to 2015 under President Barack Obama, and U.S. deputy secretary of state from 2015 to 2017. He was pictured in the White House Situation Room with Obama and Cabinet principals during the 2011 U.S. military raid that killed Osama bin Laden.

In an interview with Reuters in October, Blinken said the United States must not cede its leadership role in the world.

"As much of a burden as it sometimes seems to play ... the alternative in terms of our interests and the lives of Americans are much worse," he said.

Biden, who was vice president under Obama, pledged before the Nov. 3 election to rejoin global commitments, stand up for U.S. allies and “make it clear to our adversaries the days of cozying up to dictators are over,” referring to Trump’s friendliness with North Korean leader Kim Jong Un and Russian President Vladimir Putin.

People familiar with his management style describe Blinken, 58, as a "diplomat's diplomat," deliberative and relatively soft-spoken, but well-versed in the nuts and bolts of foreign policy.

"I have never seen him lose his cool," said Tom Shannon, who worked with Blinken on the National Security Council in the 1990s and in the Obama-era State Department.

After Democratic presidential nominee Hillary Clinton lost the 2016 election to Trump, Blinken became one of the founders of WestExec Advisors, a Washington consultancy advising corporations on geopolitical risks.

Under Obama, Blinken worked to limit most U.S. combat deployments to small numbers of troops. But he told Reuters last year that Trump "gutted American credibility" with his pullback of U.S. troops in Syria in 2019 that left Kurdish U.S. allies in the lurch in their fight against Islamic State.

The White House did not respond to requests for comment on the criticism. Trump at the time defended the Syria pullback, saying it was evidence of his intent to bring "endless" foreign wars to a close.

Nevertheless, U.S. allies say not all of Trump's policy legacy will be hurled out the window, and neither long-term allies nor strategic rivals such as China expect a soft touch from Biden. Experts expect the Biden White House to join with allies in confronting Beijing and to take a tougher line on human rights.

On the campaign trail, Blinken was one of Biden's closest advisers, even on issues that went beyond foreign policy.

"The president-elect has implicit trust in Tony," said one former Obama administration official who has worked closely with Blinken.

That trust is the product of the years Blinken worked alongside Biden as an adviser to his unsuccessful 2008 presidential campaign, his national security adviser early in his vice presidency, and as the Democratic staff director of the Senate Foreign Relations Committee when Biden was chair.

"His DNA is really what you've heard from the president-elect. A key ingredient is partnering with our allies, leveraging them instead of going it alone," the Obama official said.