By Trevor Hunnicutt and John Whitesides TAMPA, Florida (Reuters) - Democrat Joe Biden on Tuesday made his first campaign visit of the year to Florida, where opinion polls show a tight race against President Donald Trump amid signs of lagging support for Biden among the battleground state's crucial Hispanic voters. With less than 50 days until the Nov. 3 election, the Biden campaign is trying to overcome concerns about enthusiasm among Florida Latinos and a disinformation campaign that has tried to paint the moderate Democratic nominee as a socialist 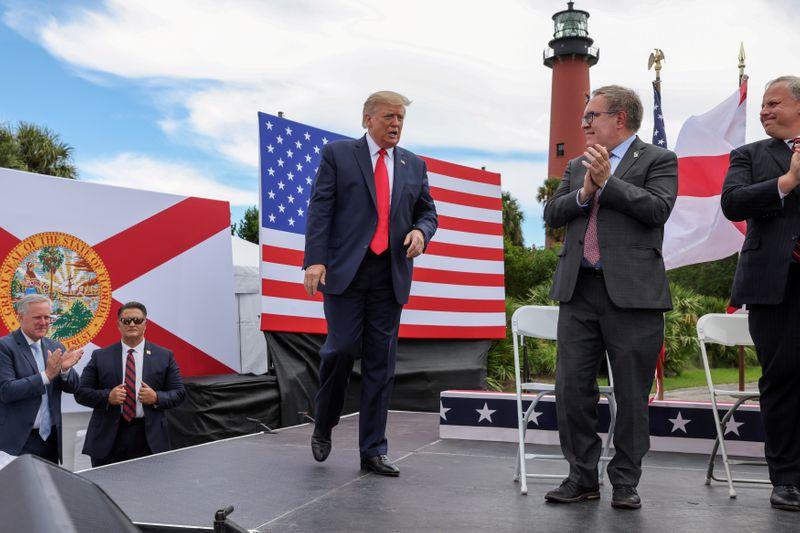 By Trevor Hunnicutt and John Whitesides

TAMPA, Florida (Reuters) - Democrat Joe Biden on Tuesday made his first campaign visit of the year to Florida, where opinion polls show a tight race against President Donald Trump amid signs of lagging support for Biden among the battleground state's crucial Hispanic voters.

With less than 50 days until the Nov. 3 election, the Biden campaign is trying to overcome concerns about enthusiasm among Florida Latinos and a disinformation campaign that has tried to paint the moderate Democratic nominee as a socialist.

A NBC News/Marist opinion poll showed the two White House contenders in a dead heat in Florida and Trump with a 4-point edge over Biden among the state's Latinos. Democrat Hillary Clinton won their votes by 27 percentage points in 2016, according to exit polls. Other polls have shown Biden leading among state Hispanics but still trailing Clinton's support.

Trump won Florida over Clinton by just 1.2 percentage points, which helped propel him to the White House. His inroads with Florida Hispanics have been fueled by his strength with conservative Cuban-Americans, a Republican-leaning bloc he has courted throughout his presidency.

"Clearly, there has been some hemorrhaging of Hispanic support going on, mainly Cuban-Americans," said Democratic state Senator Annette Taddeo, a Colombian-American. "The Republicans have worked really, really hard, and they have been constantly present."

The steady drumbeat of Republican attacks on Biden, the vice president under Barack Obama, falsely labeling him a socialist has also taken a toll, Florida Democrats said.

"He is completely in the pocket of the radical left - those people who look fondly at the socialist dictatorships in Cuba, Venezuela and elsewhere," Núñez told reporters on a call arranged by the Trump campaign on Tuesday.

Felice Gorordo, a Cuban-American Biden ally, said the campaign should focus on younger Cuban voters, who do not see foreign policy as the No. 1 issue, making them more open to the campaign’s central message on recovery from the COVID-19 crisis.

Some Florida Democrats said they had noticed a sharp rise in videos and commentary in social media and texts repeating falsehoods about Biden and pushing other conspiracy theories about Democrats.

"We are seeing a massive disinformation campaign in Spanish aimed at our community calling Biden and Democrats socialists, and it is having an effect," said Evelyn Perez-Verdia, a Colombian-American Democratic strategist in south Florida.

Asked by a Reuters reporter as he boarded a flight to Florida how he would handle disinformation campaigns targeting Latino voters, Biden said he would "Just tell the truth."

"Everybody knows who Trump is. People are going to show up and vote,” Biden said.

Florida, where Hispanics make up about 20% of the state electorate, is a linchpin in Trump's re-election strategy. A Biden win of Florida's 29 electoral votes would sharply reduce Trump's chances of another term - no Republican has won the presidency without Florida since Calvin Coolidge in 1924.

Nationally, Hispanics make up the largest minority voting group, at more than 13% of eligible voters. Biden's support with Latino voters across the country has dropped; they favored him over Trump by 9 points in August, down from 30 points in July, according to Reuters/Ipsos data.

The Biden campaign, urged by Taddeo and other Democrats to do more to court Latinos, has stepped up Spanish-language and bilingual advertising and hired more staff.

Ahead of events on Tuesday in Tampa and Kissimmee, two Florida cities with heavy Puerto Rican populations, Biden said: "I am going to work like the devil to make sure I turn every Latino and Hispanic vote."

As part of his trip Biden is expected to sit for an interview with Telemundo, a Spanish-language network.

He will get some help from former Democratic primary rival Michael Bloomberg, who will spend $100 million on Biden's behalf in Florida, with a particular focus on Latino voters.

Polls show Biden running ahead of Clinton's level of 2016 support among seniors in Florida, another crucial voting bloc, and among white voters, giving him plenty of pathways to reach a majority, Democrats said.

They said there was plenty of opportunity for Biden to make up ground with Florida Hispanics, particularly among the state's non-Cuban Latinos who include a fast-growing Puerto Rican population and Mexicans, Colombians and Venezuelans.

Biden has vowed to rescind many of the hardline immigration policies put in place by Trump's administration, and has emphasized the need for broad health and economic strategies to recover from the novel coronavirus pandemic that has hit Latino communities particularly hard.

Unite the Country, a Democratic group that supports Biden, is spending $1.4 million on digital advertising aimed at Latinos in south Florida. Steve Schale, the group’s chief executive, said the group could be most effective by increasing support of non-Cuban Hispanic voters who are not attached to a party and are typically more persuadable.